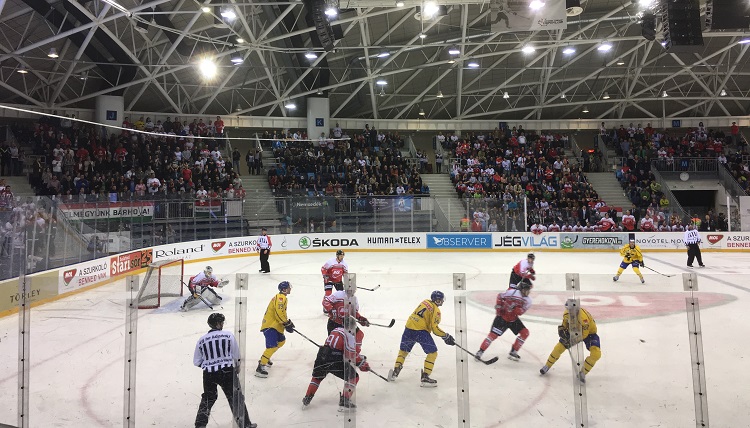 Celebrating the 90th anniversary of the Hungarian Hockey Federation’s founding, the national team began preparatory competitions for the 2017 World Championships with a 4-0 loss to Sweden. 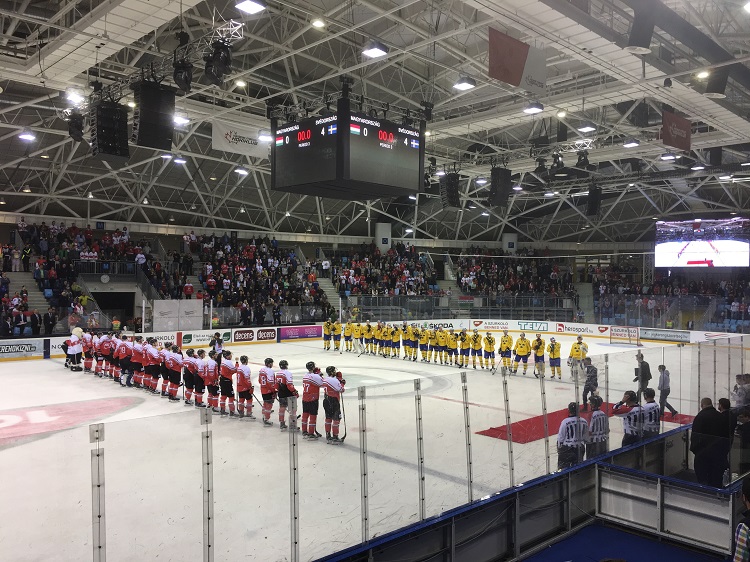 Playing in front of a jubilant and supportive sold-out crowd of nearly 5000 people at Tüskecsarnok (Spike Hall in English), the national team put on a solid performance despite the loss, especially considering Sweden’s international reputation as a hockey powerhouse.

The game started out poorly for Hungary, with Sweden’s Richard Gynge slotting in a backhander a mere 20 seconds into play off an assist from Alexander Bergström. Despite the quick goal, Hungary rebounded, as both Rich Chernomaz and Dániel Kóger threatened on the other end, although neither could convert. Hungary continued to push, as both Csánad Erdély and Bálint Magosi had unsuccessful attempts on net. Despite Sweden’s first goal, the Hungarians refused to roll over, leading to a 1-0 score at the end of the period.

The second period told a similar story as the first. For the first 4 minutes of the period, Sweden continued to launch deep shots – which goalie Zoltán Hetényi handled with relative ease, keeping the Hungarian deficit at 1. Despite a uptick in defensive intensity, Sweden continue to control the puck and the pace of the game, leading to additional goals in both the 29th and 30th minutes, scored by John Norman (from Daniel Brodin) and Emil Pettersson (from Richard Gynge and Alexander Bergström), respectively. Bence Bálizs replaced Zoltán Hetényi in the net after the 29th minute goal. Once again, following this minute of defensive breakdown, Hungary turned up the pressure, thereby limiting the damage.

The third period was undoubtedly Hungary’s best period of play. Goalie Bence Bálizs fended off a flurry of attempts early in the period, blanking Sweden for the first 13 minutes. The Hungarians played with a newfound urgency, potentially to score a goal in front of the hometown crowd. Eventually, however, Dennis Everberg notched a fourth goal for Sweden on a lucky deflection of a save made by Bálizs. The Hungarians never lost their drive, however, as evidenced by numerous outstanding plays, including Zoltán Kovács diving block of a Swedish slapshot. In the end, despite numerous chances around the crease, Hungary remained scoreless.

For Hungary, Sándor-Áron Reisz was selected the Most Important Player of the match, while goal scorer Richard Gynge earned the honors for Sweden.

Although the result was disappointing, the Hungarian fans and players kept their heads held high in defeat. The fans chanted throughout the whole game, concluding the match with a 2-minute standing ovation, which was accompanied by a postgame singing of the national anthem.

This was Sweden’s first visit to Hungary since 2007, when they defeated the Magyars 7-1 at Phoenix Hall in Debrecen. Despite the loss this was certainly a better performance for the Hungarians, as although the Swedes racked up the goals, the game intensity was relatively even throughout.

As of 2016, Sweden was the 5th ranked team in the world, while the Hungary was placed at a respectable 19th – two higher than it had been ranked in the previous year. Against the Swedes, Hungary fielded a team of 22 players who had made it past the first round of cuts, including Captain István Bartalis, who plays in the widely-respected Deutsche Eishockey Liga (Germany) former NHL draftee and Assistant Captain János Vas, a former NHL-draftee who has has played in the American Hockey League, ECHL, and the Czech Extraliga.

The Swedes fielded an incredibly strong team as well, including numerous former NHL players such as goalies Joacim Eriksson and Niklas Svedberg, as well attackers Linus Omark and David Rundblad; the latter of whom won the Stanley Cup with the Chicago Blackhawks in 2015.

Hungary will host additional preparation matches in Budapest against Finland and Slovenia, on April 7th and 19th, respectively. The Hungarians will also travel to Celjie on April 11th to take on the Slovenians.

Considering Sweden’s international status and premier NHL experience, this loss was far from an unfavorable result for the Hungarians. It gave the team an opportunity to begin working out the kinks against a superior opponent before traveling to Ukraine to take on more similar opponents. The Hungarians played a strong match, and if this play can translate, they have the potential to bring home a championship from Kiev. 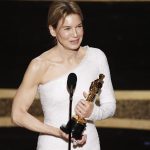 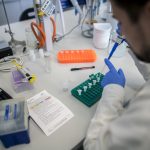