The Tradition of Easter Egg Painting in Photos 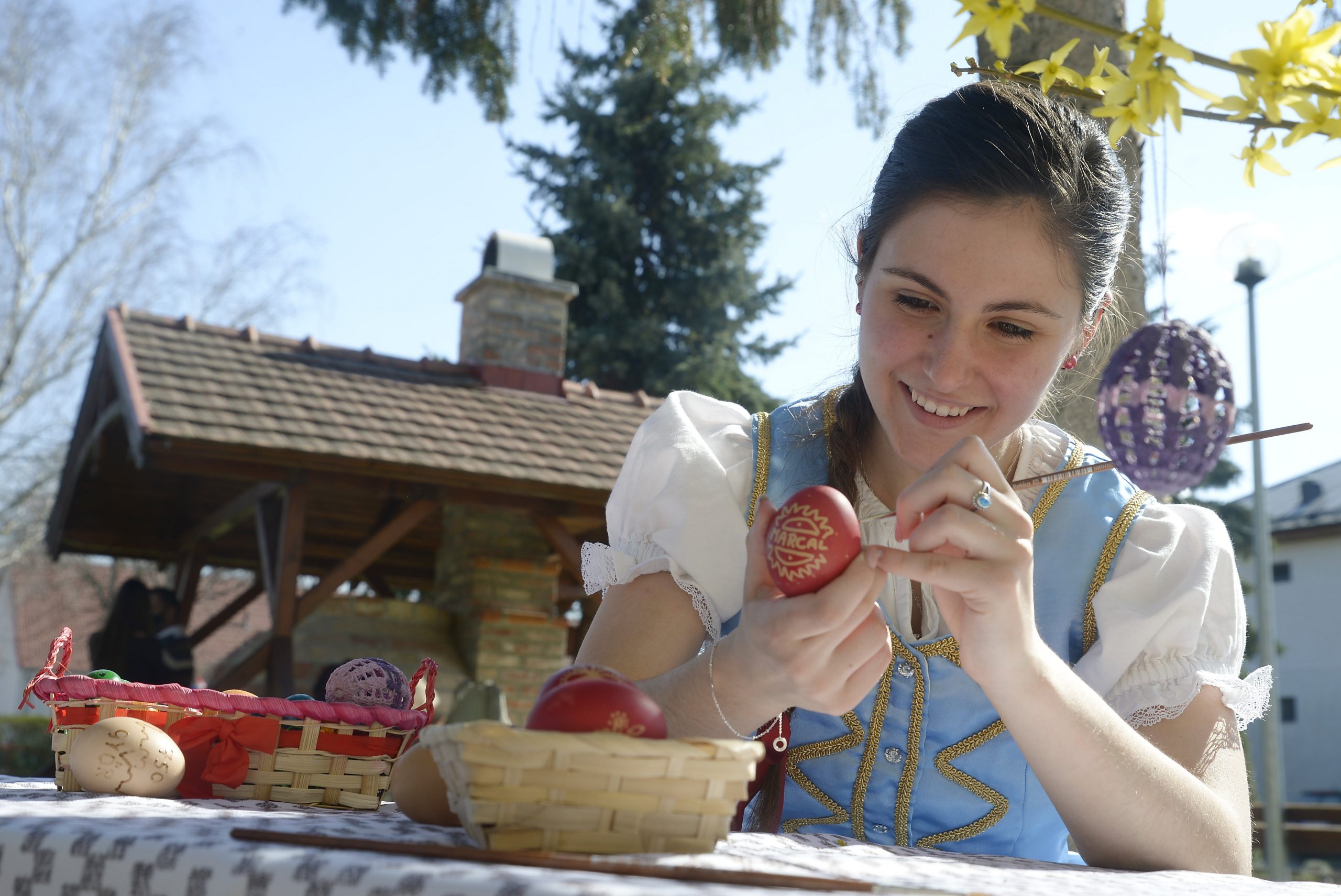 The egg is the oldest archaic symbol of life, rebirth, and fertility. It is no coincidence that it has become a symbol of life and creation in many cultures. According to Christian traditions, the new life arising from the egg is the symbol of Jesus Christ’s resurrection in order to save humanity from its sins. In another view, the eggshell symbolizes the Old Testament, while the inner part symbolizes the New Testament. According to some interpretations, Easter eggs are colored red to mirror the blood of Christ.

The painting and gifting of eggs dates back to ancient times and is much older than Christianity. Originally, painting was a pagan tradition and only later did it become an integral part of the Easter celebration. Before Christians celebrated the resurrection of Jesus, some argue ancient pagans in Europe observed the Spring Equinox as the return of the sun God ― a rebirth of light and an emergence from the lean winter. 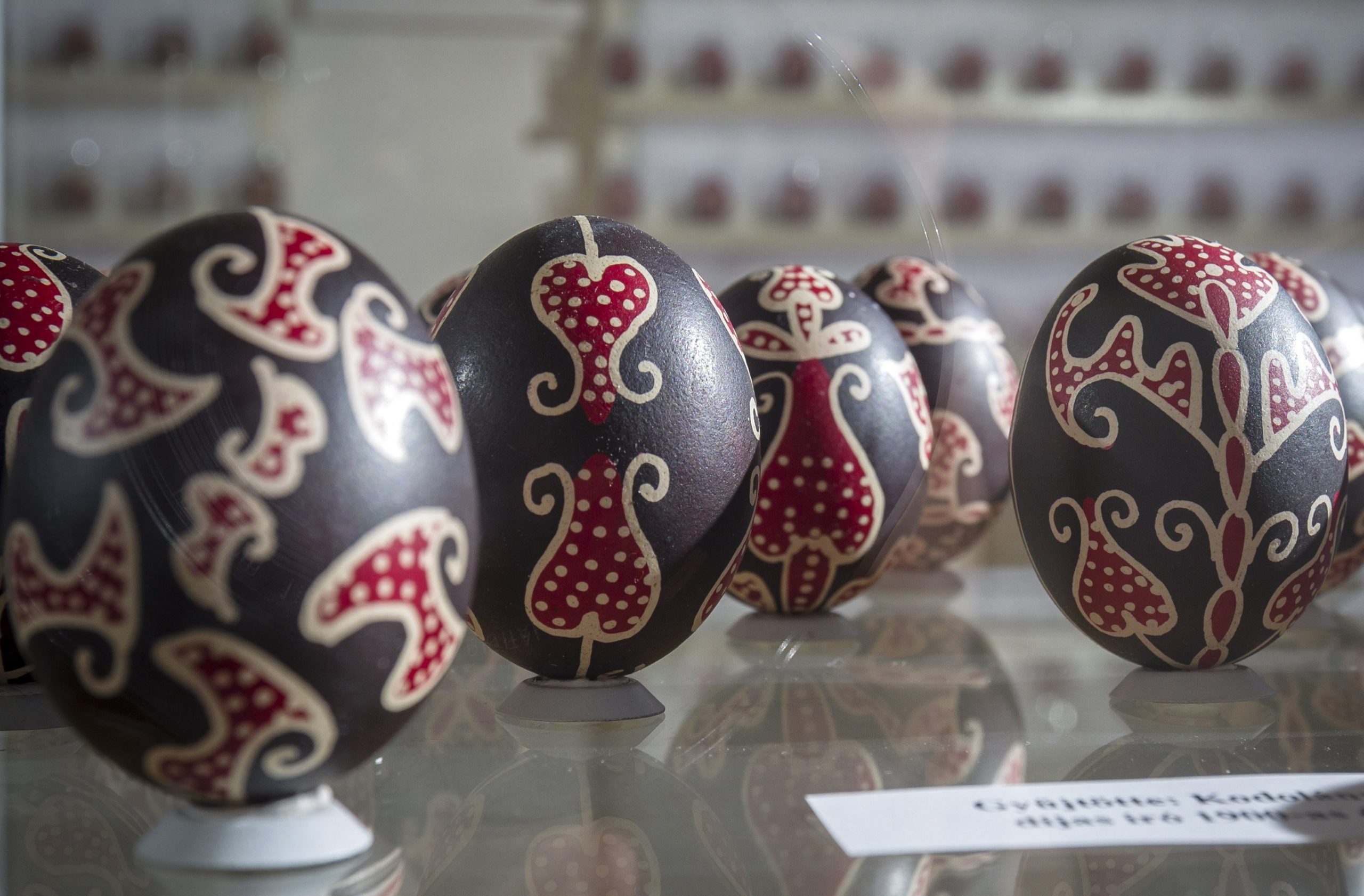 Eggs decorated with Drava-side motifs at the exhibition of the Young Master of Folk Art by award-winning egg painter, Ildikó Fekete at the Danube Palace in the capital on March 9, 2017. Photo: Zsolt Szigetváry/MTI

However, with the spread of Christianity, eggs received another meaning. They originally symbolized the resurrection of Christ, however, the traditionally red-colored Easter eggs also signified the blood of Jesus. Since then the tradition has become widespread as different regions adopted various painting techniques. 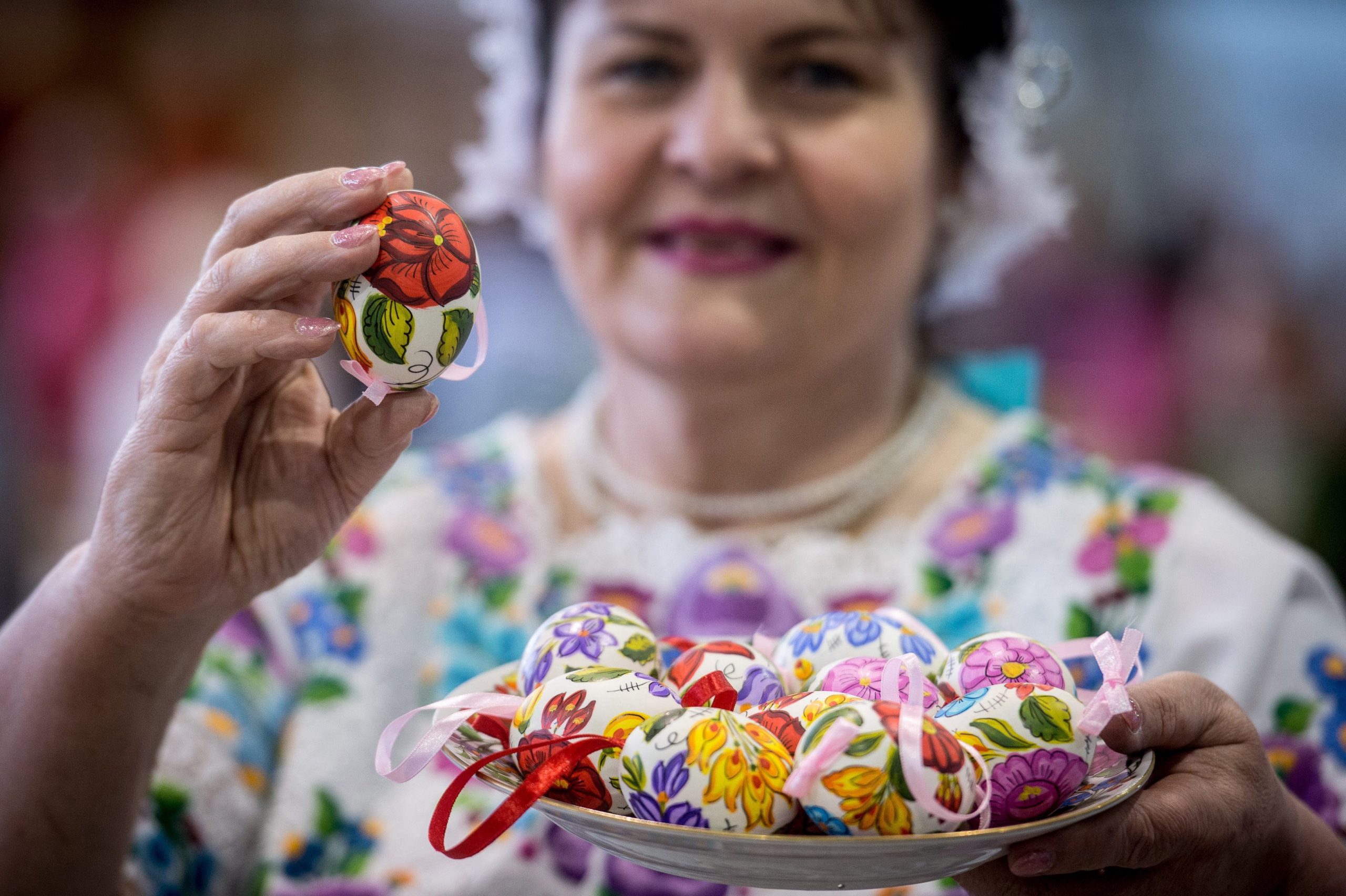 In Hungary, the gifting of painted and decorated eggs is primarily related to the tradition of “watering” during Easter. Men and boys traditionally water women and girls, and in exchange they receive the painted eggs. The forms of painting and the arrangement of the patterns varies from region to region in the country. The patterns most commonly used are geometric, the eggs are divided by longitudinal lines into two and then four squares. The almost triangular fields form the framework for geometric or floral decoration. The decorations are typically: tulips, pine branches, roses, apples, etc. 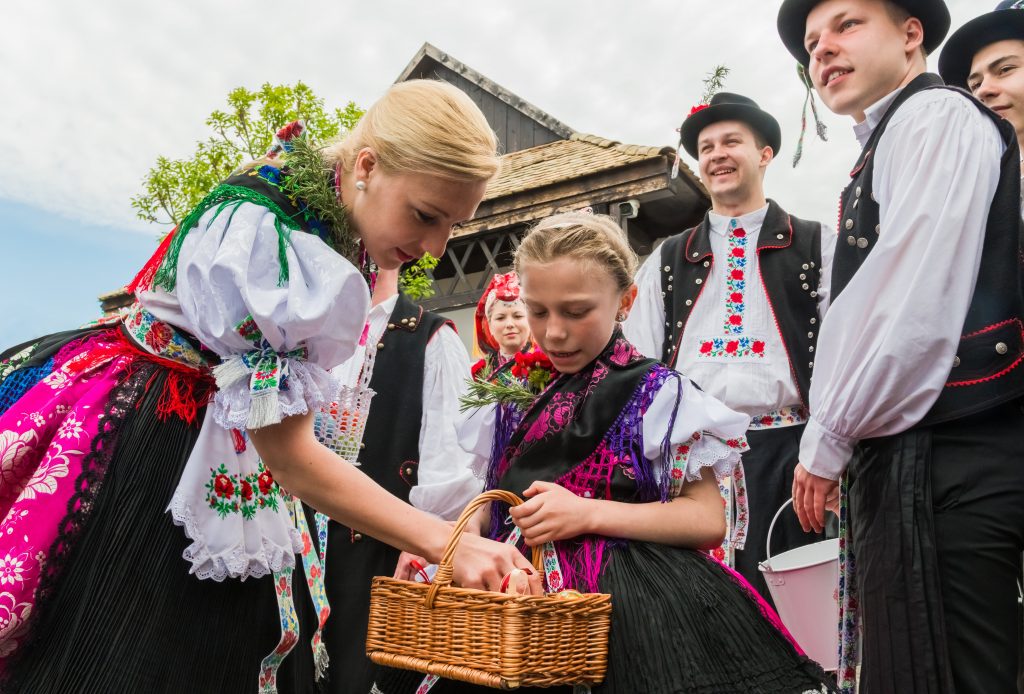 Young girls dressed in traditional Palóc folk costumes searching for Easter eggs in a basket to give to boys as gifts at the Easter Festival in Hollókő on April 22, 2019. Photo: Imre Faludi/MTI 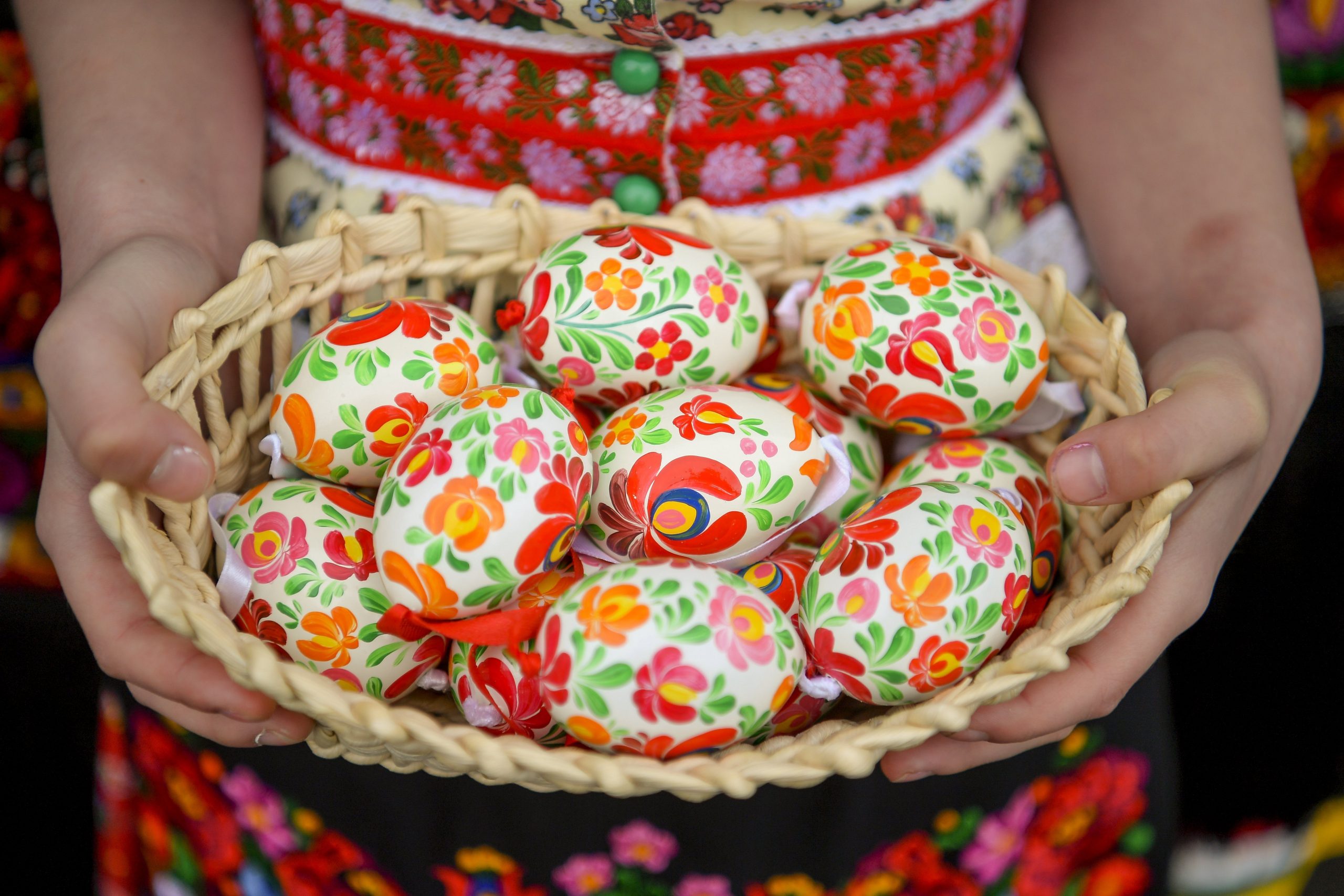 Painted eggs in a basket at the Easter presentation of the Matyó Folk Art Association in Mezõkövesd on April 1, 2018. Photo: Zsolt Czeglédi/MTI 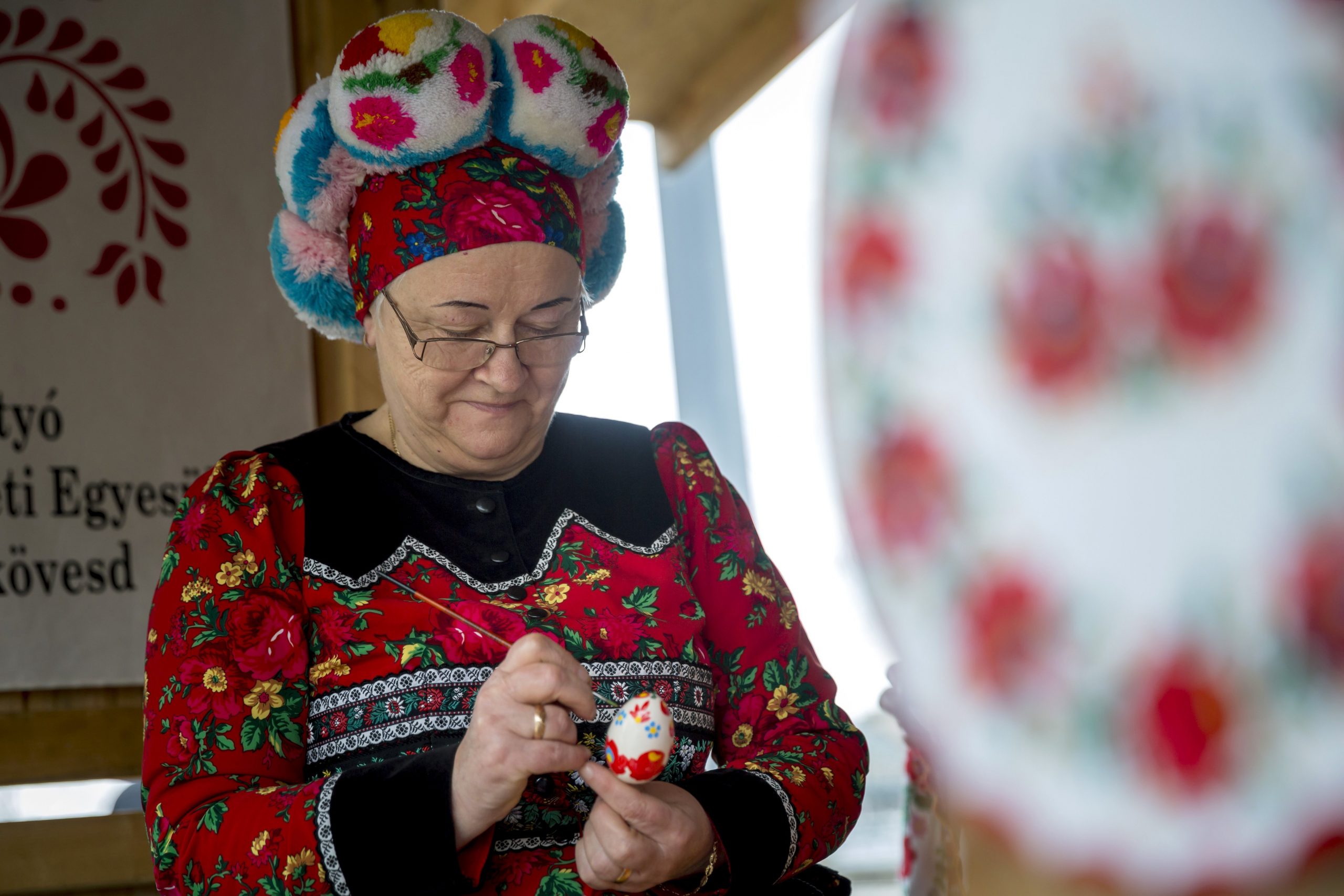 Dressed in Matyó folk costume, a woman is painting an Easter egg on the first day of the Easter program series held at the Castle Garden, Budapest. The organizers on March 31 and April 2 await those interested with traditional Easter programs, painted eggs, and petting zoos. Photo: Balázs Mohai/MTI

One of the most famous regions for embroidery in Hungary is Matyóföld, at the northern part of the Great Plain. Matyó embroidery is the richest in motifs and colors in the country, especially when we think of women’s or men’s clothing. Their costumes began to be abandoned from the 1950s, and it is only thanks to ethnographic collections that the memories of Matyó folk costumes, embroidery, and tradition have survived. In Hungary the painting of Easter eggs is often decorated with the so-called “Matyó sample” which typically includes motifs of roses and tulips. 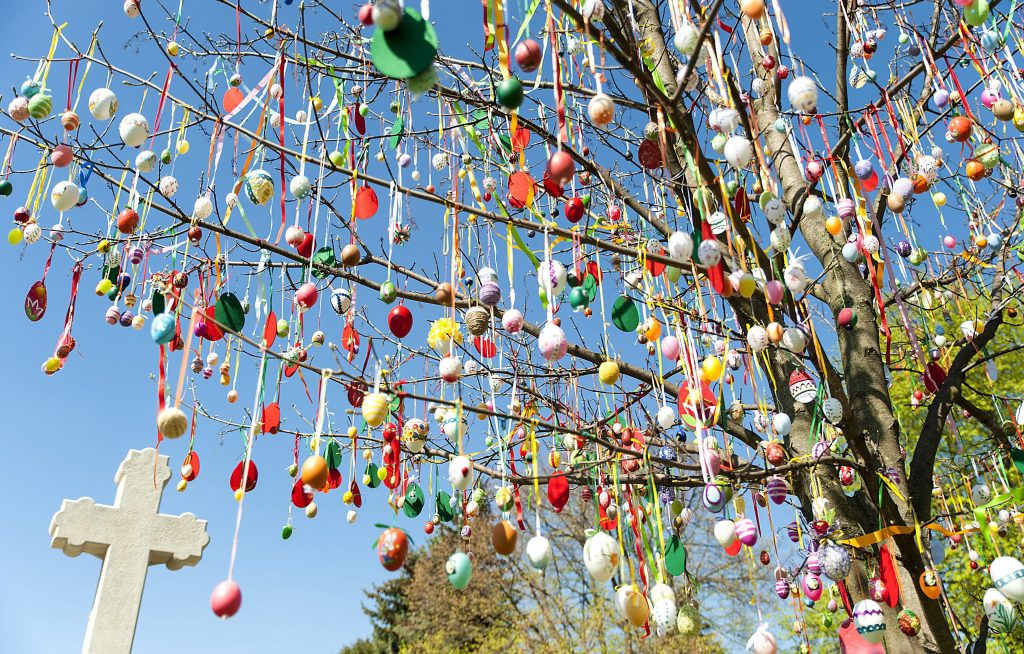 A tree decorated with Easter eggs on the main square of Csallóközcsütörtök (Štvrtok na Ostrove) in Slovakia on April 10, 2017. The tree was decorated with some one thousand six hundred eggs for the upcoming Easter celebration on the 800th anniversary of the village. Photo: Csaba Krizsán/MTI 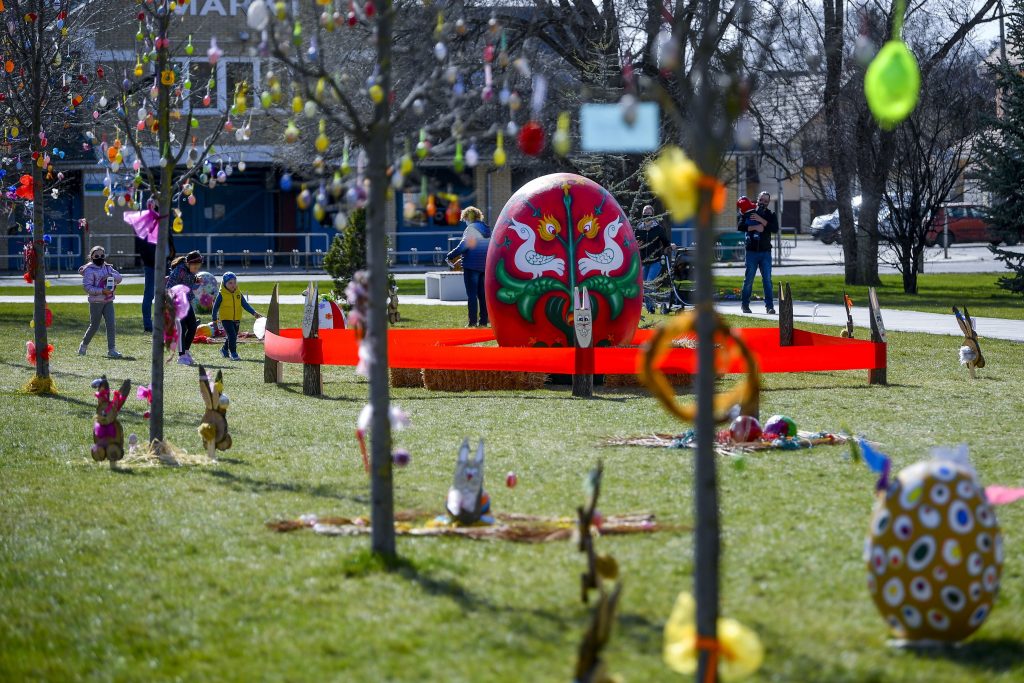 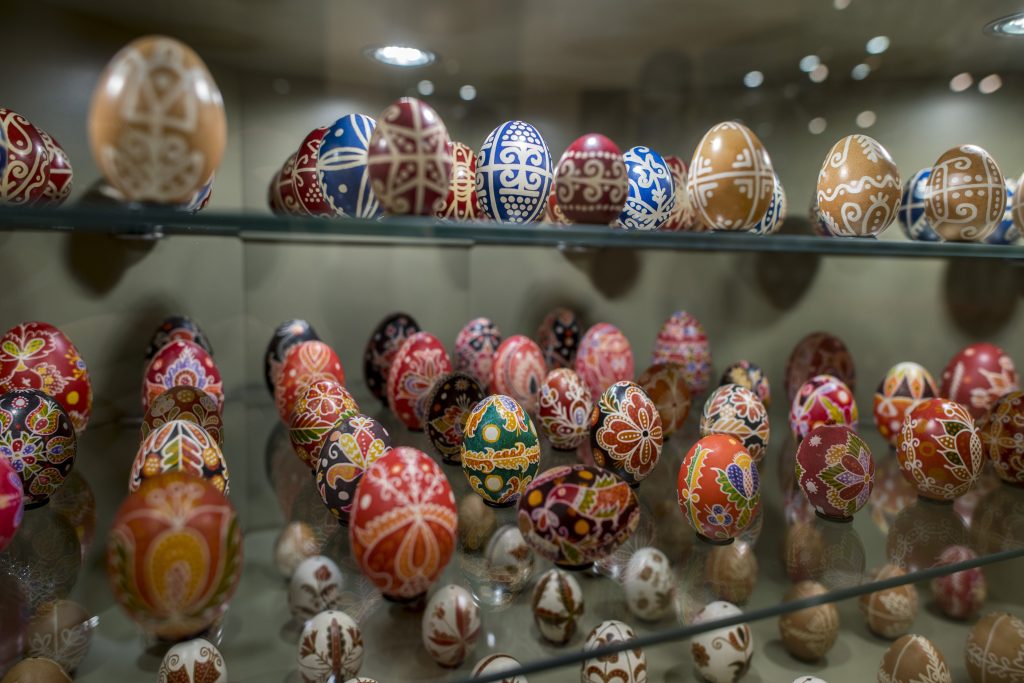 Easter eggs from Sárköz at the Arts on Eggs Museum in Zengővárkony on April 9, 2020. Photo: Tamás Sóki/MTI 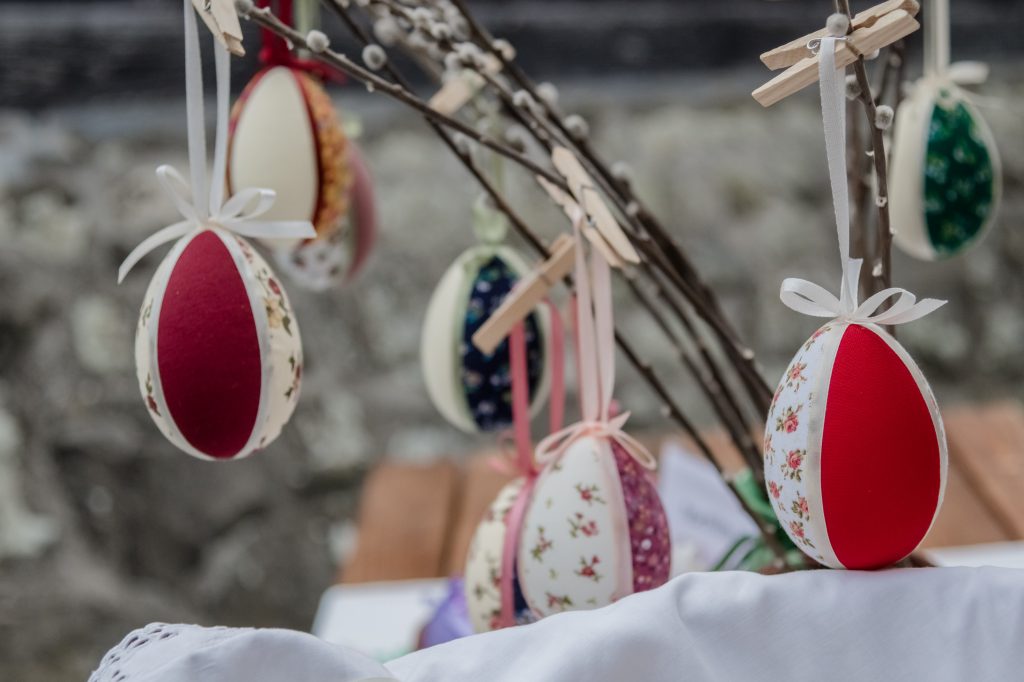 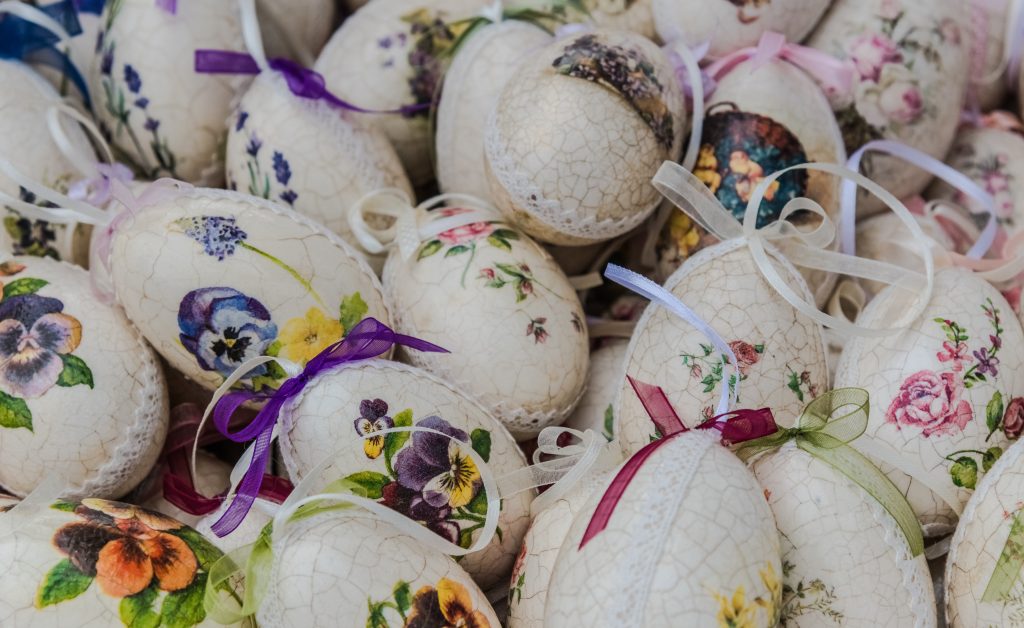 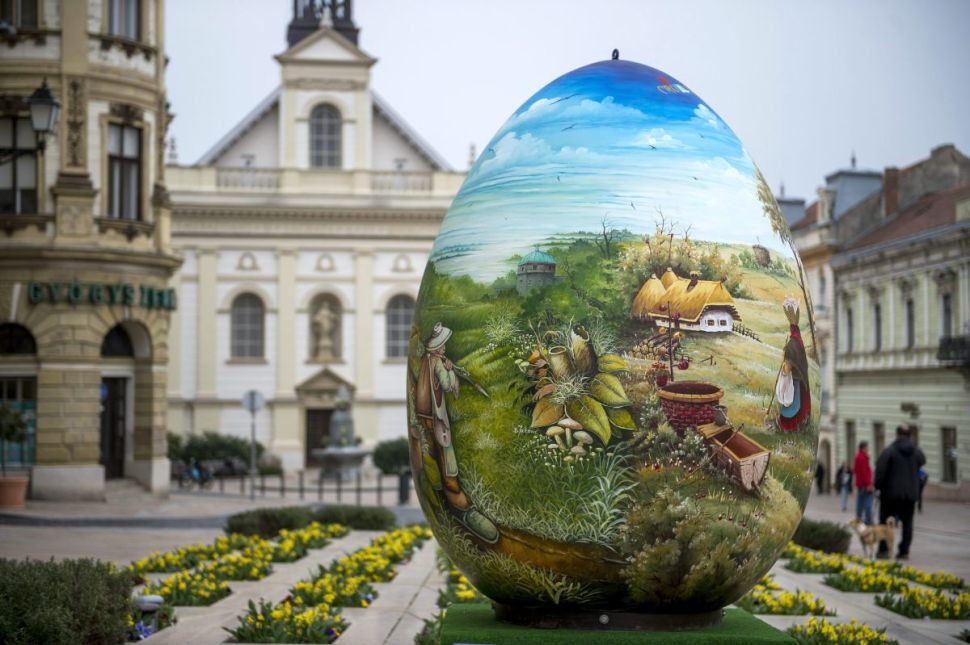 Human-sized Easter eggs at Pécs’s Széchenyi Square, on March 25, 2015. The eggs were decorated by painters based near the Drava and are a gift from the Kapronca-Körös county in Croatia to the residents of Pécs and the tourists visiting here. Photo: Tamás Sóki/MTI 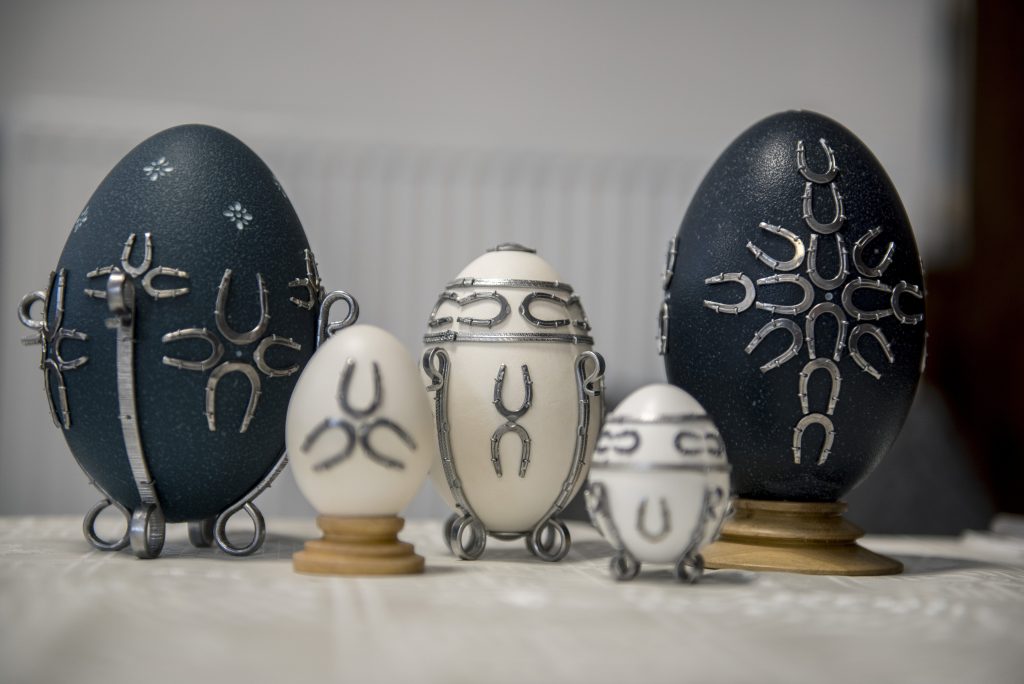 Easter eggs decorated with miniature horseshoes at the Arts on Eggs Museum in Zengővárkony on April 16, 2019. Photo: Tamás Sóki/MTI

In the featured photo: a member of the Marcal Dance and Folk Art Association paints Easter eggs in the courtyard of the Gyirmót Cultural House on March 31, 2021. Seven hundred and fifty eggs are made for the anniversary of the city of Győr. Photo: Csaba Krizsán/MTI 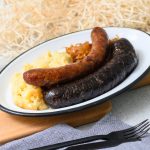 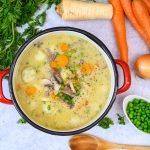