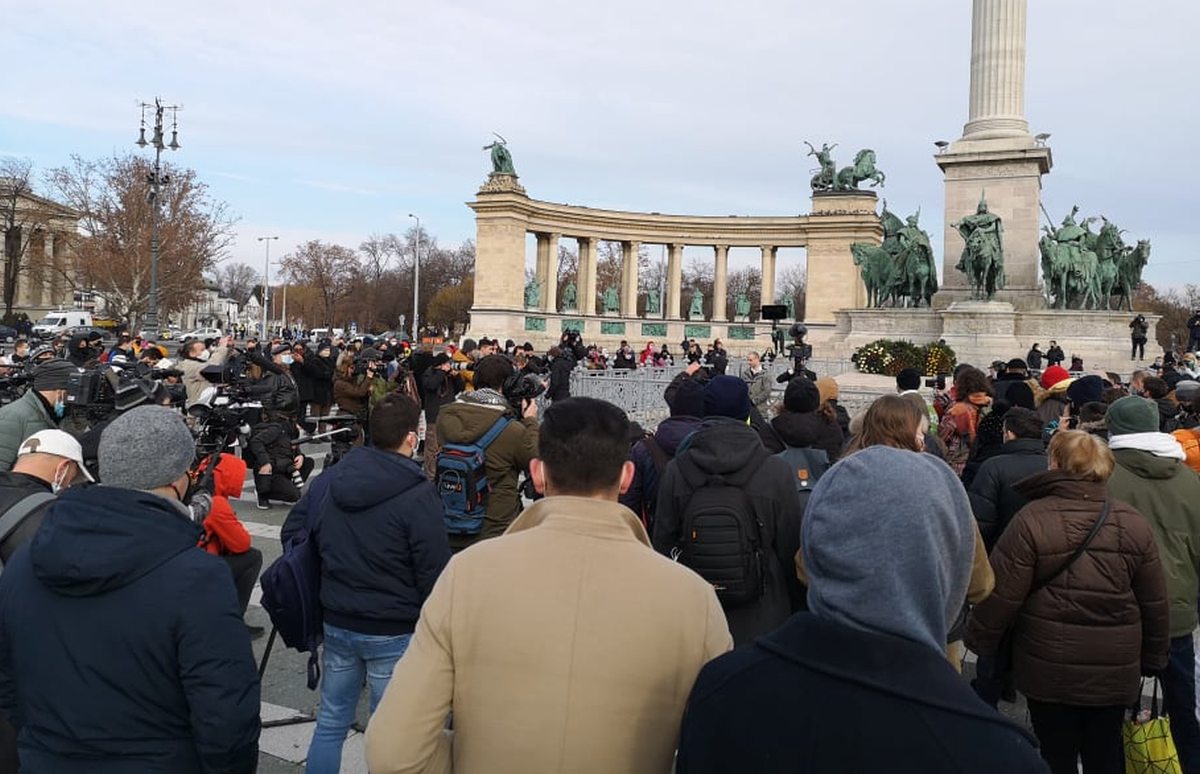 Protesters gathered at Heroes’ Square Sunday at noon to call for the easing of coronavirus restrictions, which have been extended until March. The current restrictions severely hamper the ability of catering businesses to survive.

Since the restrictions do not allow for people to gather in large groups anywhere, participants were simply told to be walking by when organizers “try out” their borrowed megaphones.

While event coordinators yelled into their megaphones that “we want to work. Politicians have not brought responsible decisions” the crowd responded “compromise!”

Small business owners on site told reporters that they are heavily in debt and struggling to make ends meet. Their options are to either go bankrupt or risk the consequences of reopening.

Some simply stated that if there are no opportunities for a return to their livelihood within the next two months, they will be forced to find a different career path.

Police arrived at the scene within half an hour, taking people’s information and performing background checks. Their presence noticeably depleted people’s willingness to remain, and those who remained were either told to leave or escorted out. 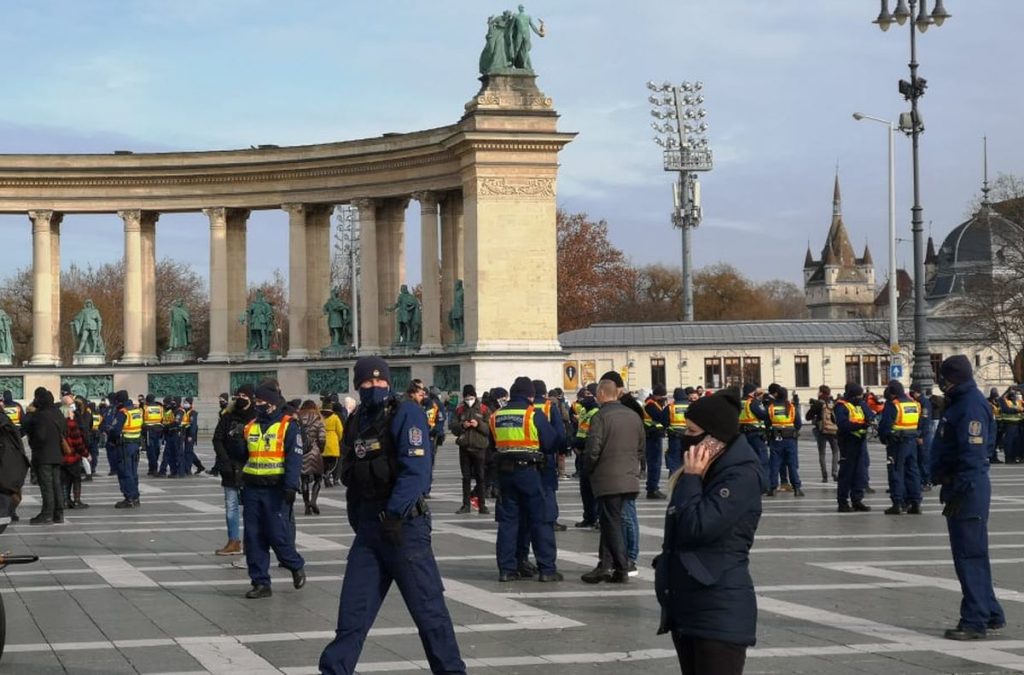 Áron Ecsenyi, organizer of the event and leader of the libertarian Down With 75% of Taxes party, raised the rhetorical question of how long those who brought the restrictions into effect had been out of work. Him and his colleagues were soon surrounded by police as well.

Ecsenyi said that there is a possibility that the movement will fail. According to him, many of today’s Hungarians were socialized during the Kádár regime and have been convinced that “they need to be afraid of the government.”

The party leader has also repeatedly referred to the Hungarian government as a communist regime.

Following the demonstration, TASZ (Hungarian Civil Liberties Union) stated on its Facebook page that the restrictions on gathering during the pandemic are unjustified. TASZ believes responsible citizens are capable of following COVID protocols and gathering without risking their health, and should have the right to protest.

A Prelude to Further Violations

The main event however, comes into effect today, February first. Multiple catering businesses have announced their reopening for this date, adhering to COVID protocols such as social distancing and masks, but breaking the law nonetheless.

Prime Minister Viktor Orbán warned the public on Friday that the consequences of reopening against restrictions are not worth it. Later that evening, fines and penalties for the act were made even more severe.

According to the new laws, if a catering business opens despite restrictions, they can be closed for six months following their first offense, and a year following their second. In the case of the latter, business owners can even be banned from continuing their involvement in the industry. 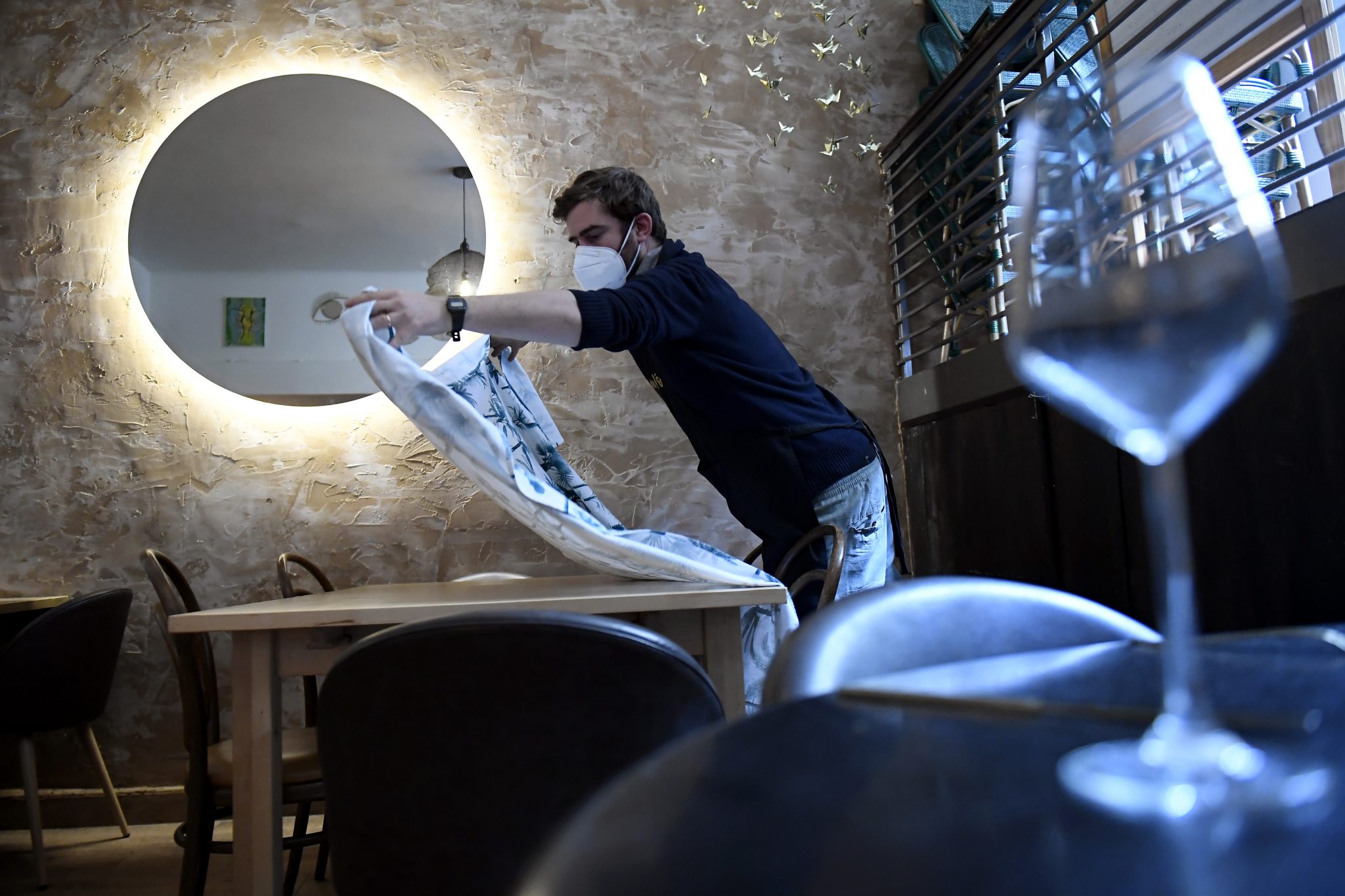 Multiple pubs, restaurants and cafés around Hungary have declared that they will be open for business in protest of coronavirus restrictions. The libertarian Down With 75% of Taxes party is organizing a country-wide reopening for February 1, during which many different catering businesses will once again be open for customers who wish to dine-in. The […]Continue reading

The amount of stores which have in fact opened in protest of restrictions is yet to be determined, but given the magnitude of the issue, there are bound to be some who take the risk.