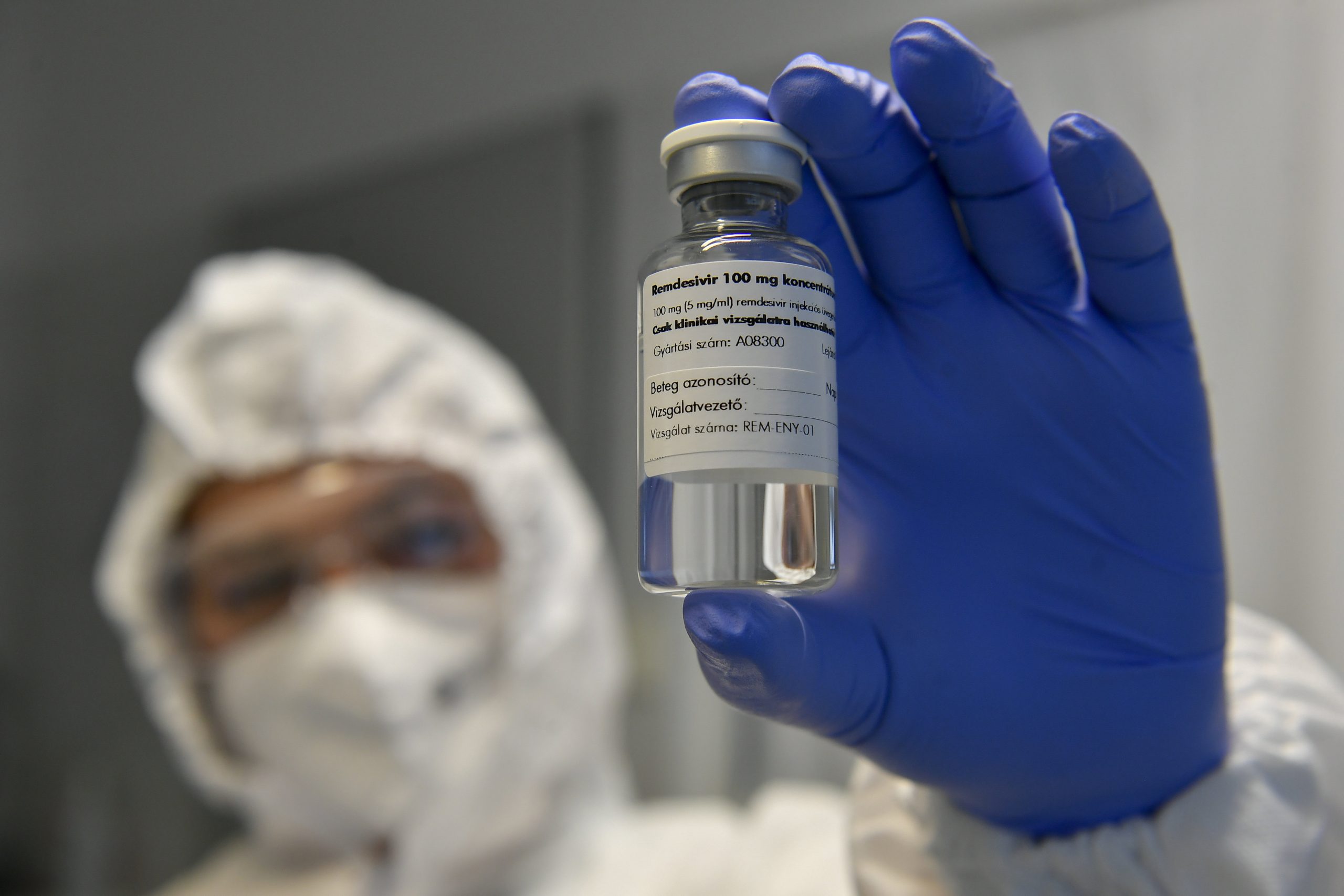 Business leaders and state secretary László György discussed how they dealt with the economic effects of the pandemic on the second day of the international “Hungary at First ‘Site‘” press conference organized by the Friends of Hungary Foundation, Hungary Today’s publisher, held online this year due to the pandemic.

According to CEO Gábor Orbán, for Richter Gedeon Nyrt, the year has been about putting the company’s people first, making sure that they are safe and healthy, making sure the firm’s supply chain and processes are looked-after so that customers are serviced appropriately. This way, Richter could keep much of its revenues, consequently, the company is doing alright. Orders were fulfilled on time and in full, which is no small feat given the supply chain and operational challenges the pandemic has posed. The company did not lay off anyone due to covid.

Richter Gedeon Nyrt. is one of the largest Hungarian pharmaceutical companies, and the one with the largest proportion of domestic shareholders. It is one of the most international companies to come out of Hungary, with 90% of their revenues coming from abroad. Gábor Orbán has been at the firm’s helm since 2017.

Orbán says the vertically integrated business model of the company and its strong balance sheet have helped Richter weather the storm. The pharma industry tends to be more resilient during economic downturns, and this has also certainly played a role. He also noted that the sector received great help from the government, which helped them overcome challenges.

Yet, they also saw a noticeable drop in medicine sales. Richter expected sales to decline due to covid temporarily, but they have remained low. This is because people stopped going to their doctors, and these missed visits likely led to a lack of necessary prescriptions in many cases. 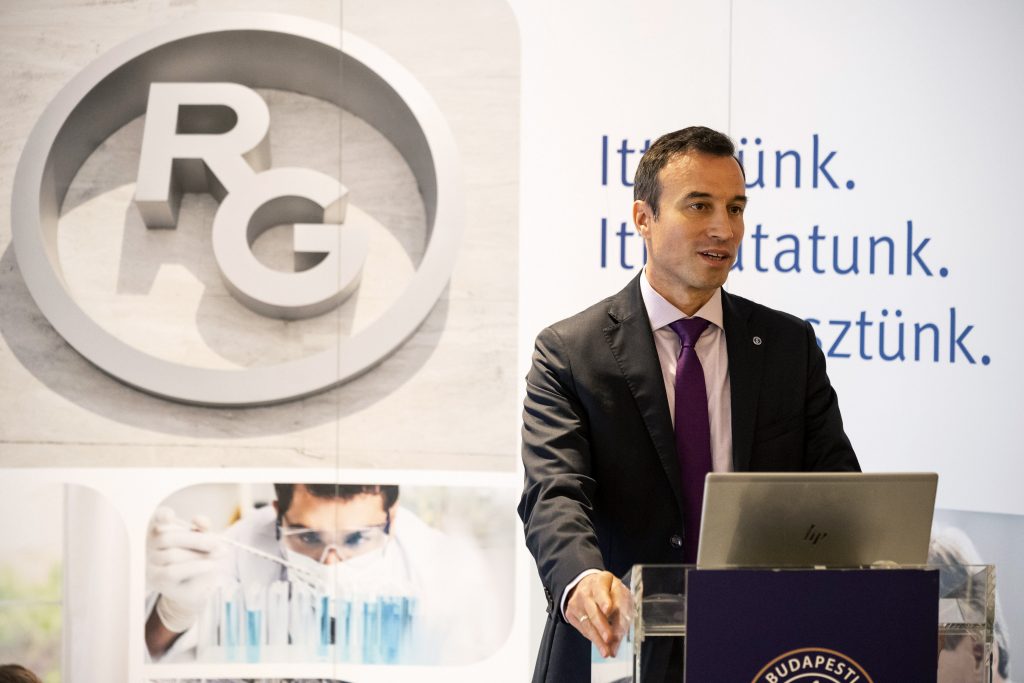 Medical representatives were not allowed to visit doctors, such meetings had to be moved online, and promotional events had to be cancelled or postponed. Both of these are cheaper, but less effective, and contributed to declining sales volumes. The head of Richter believes that in the near future, we will likely be confronted with a public health crisis due to the lack of treatment of many ailments during the pandemic.

The company is also taking an active role in fighting covid. They are producing the drug remdesivir for clinical trials focused on side- and long-term-effects, which they took a record five months to develop instead of the more common twelve. Since American company Gilead owns the patent for this drug, Richter cannot derive any commercial benefits from it, thus the program for developing and producing the drug was wholly government-funded, but only cost around a million euros.

Although there are questions about the drug’s effectiveness, specifically from the WHO, Orbán does not given much credence to these. He says that WHO is not a body who approves medication, or whose views are solicited when it comes to the effectiveness of medication. There is no doubt in his mind that the drug works, based on the fact that the FDA authorized it for use against covid. They are also developing and producing other potential treatments, but do not have the know-how or capacity to work with vaccines.

According to Dale A. Martin, President and CEO of Siemens Hungary, his company has handled the pandemic rather well so far. They have not had to let go of any employees, or even reduce working hours. They did not take any subsidies, either. They switched to home office early, and did so effectively. He is confident that working together with employees and their families, they will be able to overcome any remaining challenges.

Siemens set up its Hungarian subsidiary more than 130 years ago, in 1887. It took part in creating Budapest’s first eclectic tramline, and was already one of the biggest employers in the country by the second world war. It is therefore unsurprisingly one of the most prominent foreign companies in Hungary, taking an active role in developing infrastructure, transportation, power plants, energy systems, medical diagnostic devices, and software for the auto industry. Martin has been ad the head of the company since 2010.

Martin explained that the reason the pandemic did not hit the company too hard was that its business is rather long-term in nature, and therefore is less sensitive to temporary downturns. The fact that it is so heavily diversified also certainly helps. 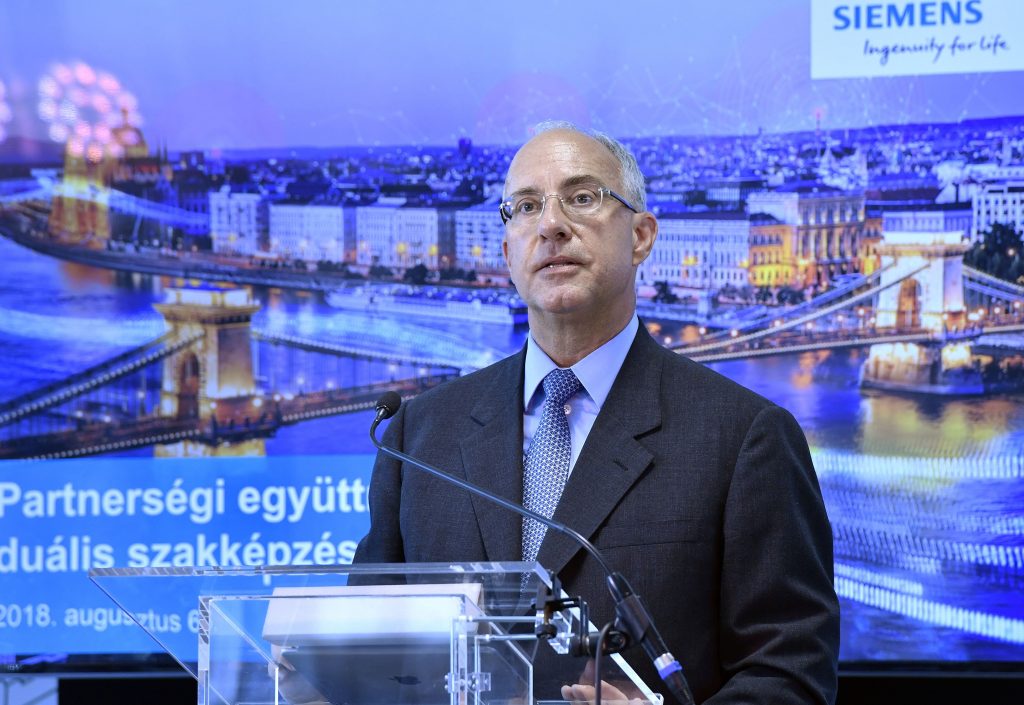 As to why Siemens chose to come to Hungary all those years ago, and why it chose to stay, Martin said that the combination of an orderly german system and the flexibility that locals display results in an effective organization. He noted that the quality of the workforce is also very good.

Dirk Wölfer, from the German-Hungarian Chamber of Commerce and Industry spoke of the relationship between German companies and Hungary. He noted that every tenth employee in the private sector in Hungary is employed by a German enterprise. Hungary relies heavily on its foreign connections, as 85% of Hungarian GDP is based on exports.

He says investors like Hungary; 85% of those his organization queried said that they would choose Hungary as again as a preferred target of investment, which is rather high. One reason for this is the low corporate tax, 9%, another is low wages compared to productivity; the lowest in the EU in these terms, in fact. Yet, Wölfer said it was not at all only these factors.

Dirk Wölfer, the head of communications at the German-Hungarian Chamber of Commerce and Industry. Photo by the chamber

Another reason is the reliability of the revised tax code, recently ranked one of the best in the region according to Wölfer. Solid infrastructure, well-defined yet not overly strict labor laws, and good public administration all contribute to the willingness of foreign companies to invest in the country. The closeness to Germany, both in physical and cultural terms also helps, and so does the good quality labor force. Naturally, many of the same things are true of other nations in the region, and competition is fierce.

Wölfer also highlighted that corporations appreciate the government’s cooperative behavior. As an example, he noted that the government promised that is the minimum wage and wages in general were to rise too fast thanks to changes in economic conditions, they would lower tax contributions to social security. Indeed, wages did rise, and from 2016-2020, social security contributions accordingly went from 27% to 15.5%.

László György, State Secretary of the Hungarian Ministry for Innovation and Technology spoke of the government’s approach to handling the economic fallout caused by the pandemic. He emphasized that they went for a balanced approach; they did not want to rush to help everyone on the short-run unconditionally, and compromise competitiveness on the long-run. 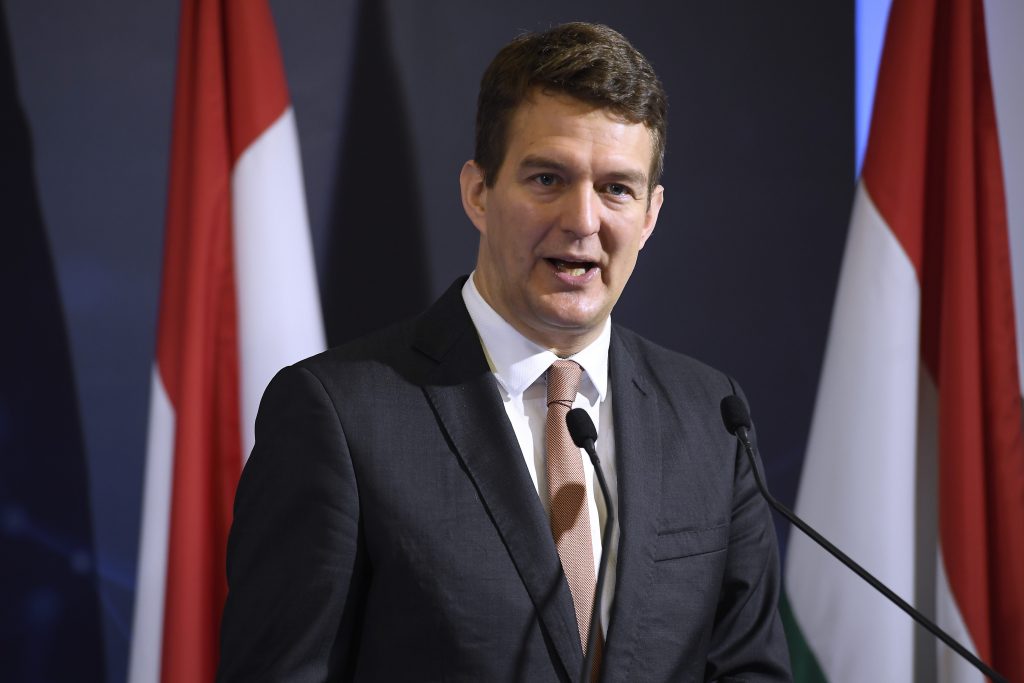 The government gave no unconditional benefits, but they helped those that were willing to take risks or make an effort to remain competitive. For instance, in terms of employment, the government introduced a free, 8 week long IT training which would help those that lost their jobs etrain as IT professionals, instead of simply handing out benefits all the time.

In terms of business, the government spent the equivalent of 2% of GDP to support investment by companies who were willing to do so even under these trying times, in order to strengthen their competitiveness and altogether bring in 4-5% extra investment to the economy. Hungarian and foreign companies benefit to the same degree. György also noted that as a protective measure, foreign corporations are now subject to stricter regulations when investing in Hungarian companies, and are only allowed to buy them up if they are planning to continue the firm’s operations.

Turning to the issue of Hungarians who study and work abroad, the State Secretary noted that many come home. Everybody has a home where they grew up and where they are citizens, and he thinks the pandemic made many people feel that more acutely. He says he encourages studying and working abroad, but that the government wants to create an environment in which Hungarians can migrate back home, and feels that nine out of ten who go abroad will do so. 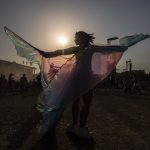