LMP: No Decision Yet on Joint Opposition List for 2022

Hungary’s opposition parties agreed that a single candidate should run against the ruling parties in each constituency in the 2022 general election, but whether they do so on a joint list would depend on the individual programme of each party, Erzsébet Schmuck, LMP’s co-leader, said on Tuesday.

The opposition faces two challenges: overthrowing the government and preparing a programme that results in a fairer and more sustainable society, she told a press conference.

A joint opposition list will be possible if the parties can agree on a joint programme, she said.

“This will not be simple because answers must be provided to unprecedented challenges, such as climate change,” she added.

Threats include desertification, draught and the loss of natural values, she said. At the same time, there is growing demand to put an end to policies that result in social injustice and a democratic deficit, she added.

Gyurcsány: Opposition Will Win if It Joins Together

LMP is preparing a comprehensive green programme which will be ready by the summer. This involves setting up an environment ministry, she said. 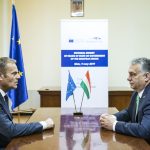