Earlier this week, Hungary Today had the opportunity to sit down with Iain Lindsay, the British Ambassador to Hungary, following a talk he held at an event hosted by the Hungarian Atlantic Council.

During the interview Lindsay, who with his vibrant social media presence and keen interest in Hungarian culture is one of the more colorful members of the Budapest diplomatic corps, discussed a number of issues, including the status of ongoing Brexit negotiations, the feelings of the British public, and the multicultural nature of the United Kingdom.

This interview has been edited for clarity and concision. 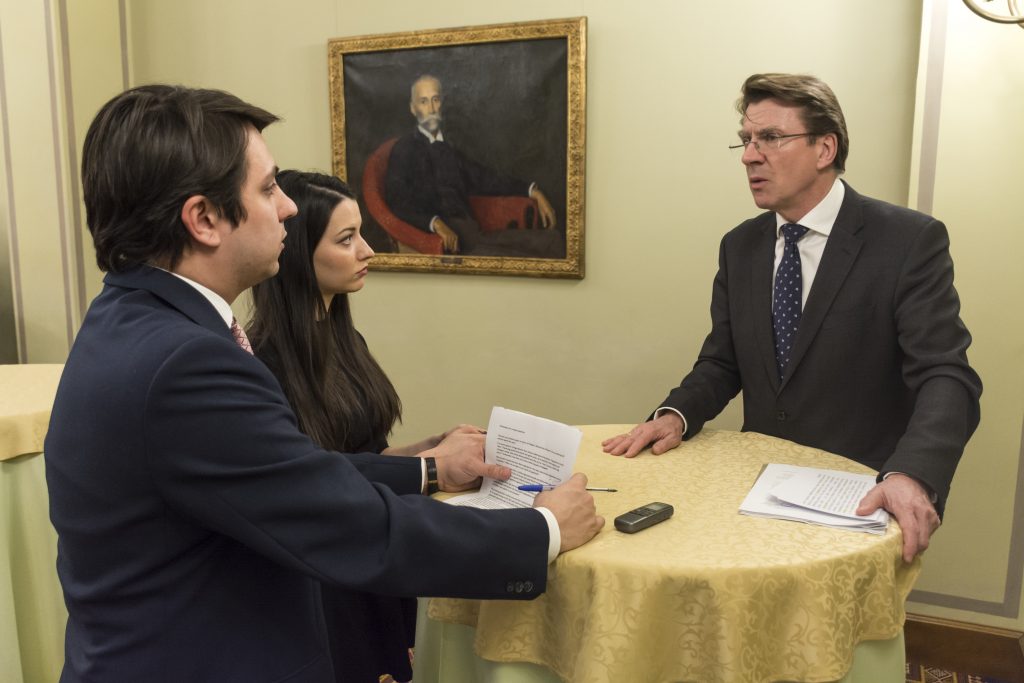 Last year, you recited a poem in honor of Hungary’s National Day of Poetry? Are you preparing with another poem this year?

I think we’re going to be asking our followers on Facebook and Instagram for suggestions as to what I should read. No decisions yet though.

We’ve heard a great deal about Brexit negotiations in the news; what do these negotiations look like in practice?

There are discussions going on, virtually every day of every week, in Brussels and in capitals, on the Brexit issues. Basically, we have to reach an agreement, and obviously the focus now is very much on two aspects: the implementation period, on the basis that neither Britain nor the European Union will be in a position to implement the withdrawal agreements the next day, we need, probably, a two-year period. The European Union has suggested 21 months, we’ve suggested 24 months, but roughly two years to implement, during which time Britain won’t be a member of the European Union, but we will continue to abide by European Union rules and regulations. Those discussions on the details of that implementation period are going on now.

The second aspect that is going on now is discussions about future relationships. There are two main aspects to that: the economic relationship, a future trade deal, and the defense and security relationship.

So, it’s not just in Brussels, there are a lot of bilateral discussions going on as well.

It’s still tentatively looking like there will be a draft agreement by the fall?

The goal is to have a draft agreement ready by then, because there needs to be a period of time to enable all the states and Britain to essentially ratify the agreements, so that everything is ready for the day that we leave at the end of March next year. That is why European Chief Negotiator Michel Barnier has said that we have to reach an agreement by October. 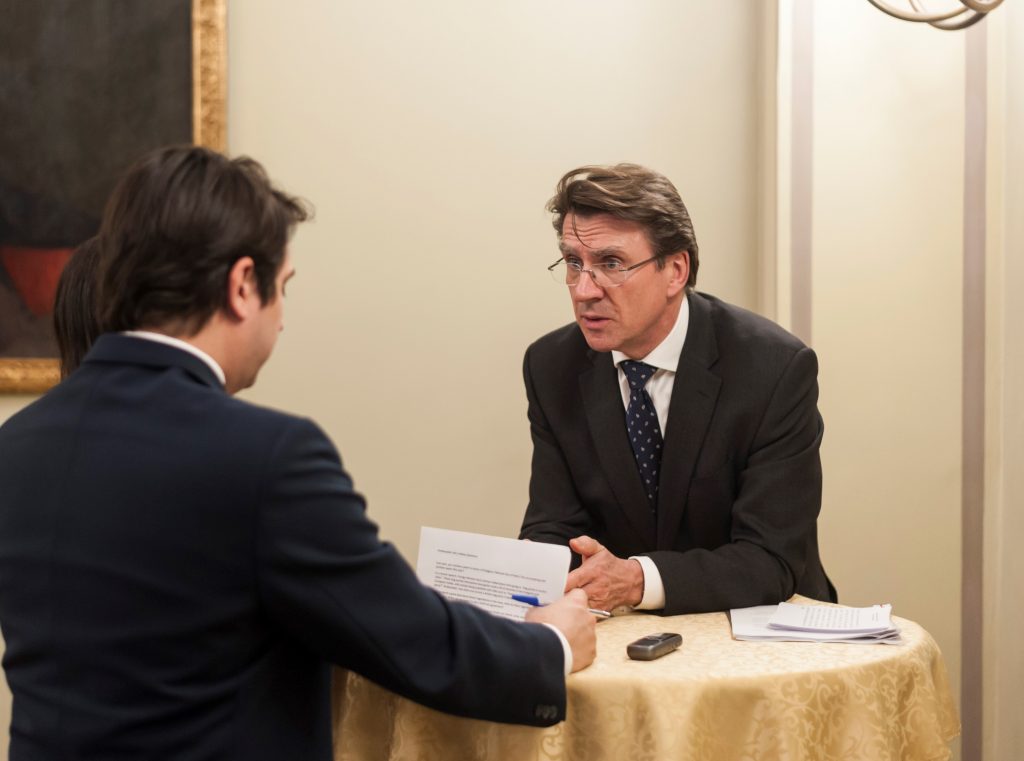 Surveys have noted that there is a distinct generational divide over Brexit; while older people tended to vote to Leave the EU, 75% of 18-24-year-olds voted Remain. As the years go by, could this generational divide lead to a gradual rollback of Brexit as older generations pass and these younger voters become a more significant segment of the British voting public?

Who can tell? That’s quite possible. The reality is, in theory, there is nothing to stop us from calling a referendum tomorrow again. But I think the point you make is a very valid one. The generations look at things differently. It is quite possible, that in 5, 10, 15 years’ time, a new generation of politicians will say “We want to look at this issue again.”

But in terms of where we are now, we’ve voted to leave, we’re negotiating the departure agreements and the future relationship, and that is what the focus is on. Prime Minister Theresa May made it very clear again in Munich on Saturday that there is no question of a second referendum, we had one referendum, people voted to leave, we now implement the wishes of the people.

There is an issue about democratic legitimacy. If politicians decide they don’t like what people have said or voted for, and they say “have another go, do it again, and get it right the next time.” This leads to the very important question of democratic legitimacy. We know that Mrs. May was asked Saturday about this, and she said that, in France, and the Netherlands, when people voted against one of the EU treaties, the governments went back and said “vote again,” and they changed their minds. But we don’t do that in Britain, that’s not the way we work.

Speaking of referendums: Ever since Brexit, there have been reports, which have intensified lately, that Scotland (which overwhelmingly voted Remain) will hold another independence referendum in order to stay in the EU? What is your reaction to such proposals?

We had a referendum in 2014. It was described as a once-in-a-generation referendum. By any standards, four years is not a generation. The majority of people voted to stay in the United Kingdom, politicians agreed that we should abide by that, and four years later people are saying “well, there should be another referendum.” How often do you go back to people on these questions? And the reality is that all the opinion polls in Scotland still show that the majority of people are against independence. Indeed, the idea of having a referendum before we’ve left the European Union would be crazy, because what would people be voting for? They wouldn’t know what sort of relationship Britain would have with the European Union in the future. 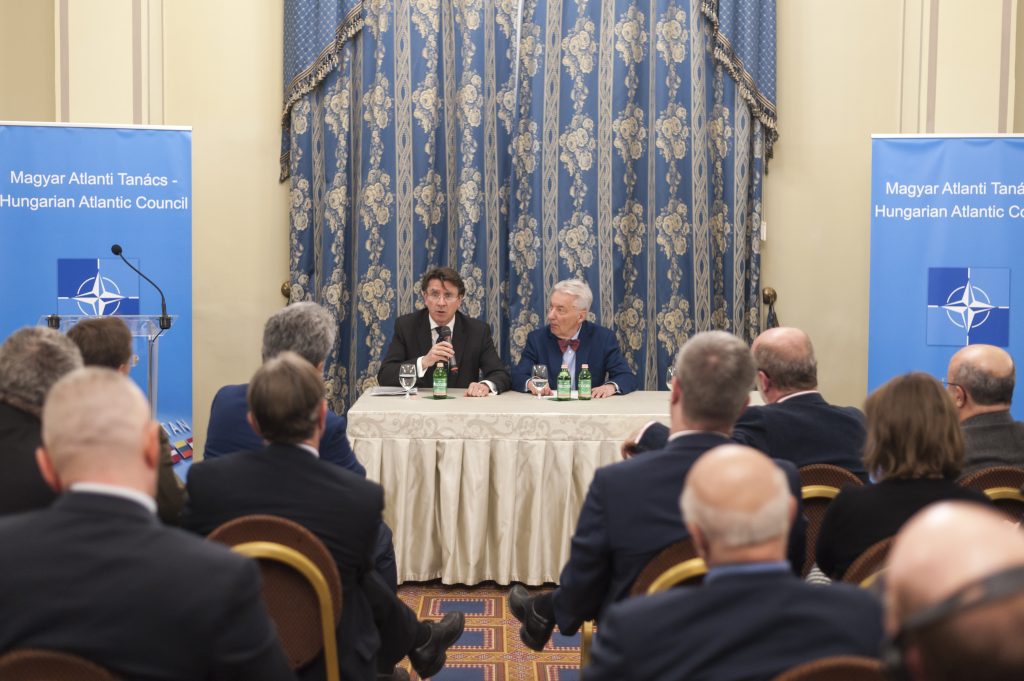 Ambassador Lindsay at the event with E. Sylvester Vizi, president of the Hungarian Atlantic Council and Chairman of the Board of Trustees of the Friends of Hungary Foundation (photo: Tamás Komporday / Hungary Today)

In his ‘State of the Nation’ address yesterday, Prime Minister Viktor Orbán claimed that, if migration continues, then London will become the first in a string of majority Muslim cities in Europe, which he claimed would lead to “the fall of the West,” and the “realization of all our nightmares.” By contrast, many members of the British government, including the Foreign Minister and Prime Minister, have viewed London’s diversity as a strength. As the UK’s Ambassador to Hungary, how do you feel about Orbán’s comments?

I think that’s wrong. Britain is a multicultural country. People seem fixated on Muslims. We have a small Muslim population, France has got a bigger one, percentage-wise.

Obviously, we’ve had our problems, but the reality is that it’s a small minority of people that cause those problems.

Britain’s strength, in many ways, lies in the fact that we are a multi-cultural country. After the Second World War, in the 1950s, after the Suez Crisis, people said “Britain is finished.” American presidents basically wrote off Britain. But as a result of migration, as a result of foreign investment in our country, we’ve become incredibly successful. The reality has been that, until the last couple of years, we’ve been one of the most successful advanced economies. We have links all over the world which help us.

So, no, I don’t accept the idea that, somehow, Britain is a nightmare vision of the future, or that London is.

It doesn’t seem to stop lots of Hungarian politicians from spending time in London, buying property in London, or visiting the UK.

Britain’s got a good story to tell. I’m Scottish. I migrated, if you like, from Scotland to England to work for the Foreign Office, my wife was born in London of Irish parents. Britain is very multi-cultural. One of the reasons why so many people from all over the world love London, and love the UK, is because we’re a successful, accepting multi-cultural society; multi-cultural, and multi-religious.

This idea of the positive aspects of multi-culturalism has been one of the cornerstones of a positive evaluation of Brexit as well. Considering the rhetoric surrounding “Polish vermin” and other Eastern European groups leaving Britain, and studies showing a correlation between “fear of immigrants and foreigners” and support for Brexit, is there not some link between voting leave and xenophobia among certain voters?

I think there were some incidents, comparatively few incidents, but there were some, there’s no doubt about it, and it was awful, because that did not reflect Britain. If Britain was that sort of country, people wouldn’t come to our country. If people thought that, when you come to Britain, people hate you because you’re a foreigner, they wouldn’t come. But the reality is that people keep coming to Britain, because by and large we are an accepting society.

I think there is no doubt in some parts of Britain, where there has been a lot of migration from Eastern Europe, people have felt swamped. People have felt that, suddenly, their small country towns or rural areas have changed. When I’m giving speeches, I sometimes use the analogy of places like Miskolc. If you imagine, say 15 years ago, Miskolc had 0% non-ethnic Hungarians. If now it’s something like 10 to 15% non-ethnic Hungarians, what would the reaction of people be in places like Miskolc or Nyiregyháza. In other words, not capital cities like Manchester, Birmingham, London, which are fairly multicultural, but regional towns which don’t often see migration. I think that’s happened in some parts of Eastern England, where there have been a lot of people from mainly Poland and Romania.

So, there were some incidents, but they were condemned. Most British people do not behave like that, and do not believe that. Every country has got a lunatic fringe, crazy people, extremists, and the important thing is to keep pushing the messages of

We welcome you, we accept you, we value you.

They are great migrants.

So, you think it’s a fringe, and not some sort of societal undercurrent?

I think it’s a small minority of people, most people do not believe that. 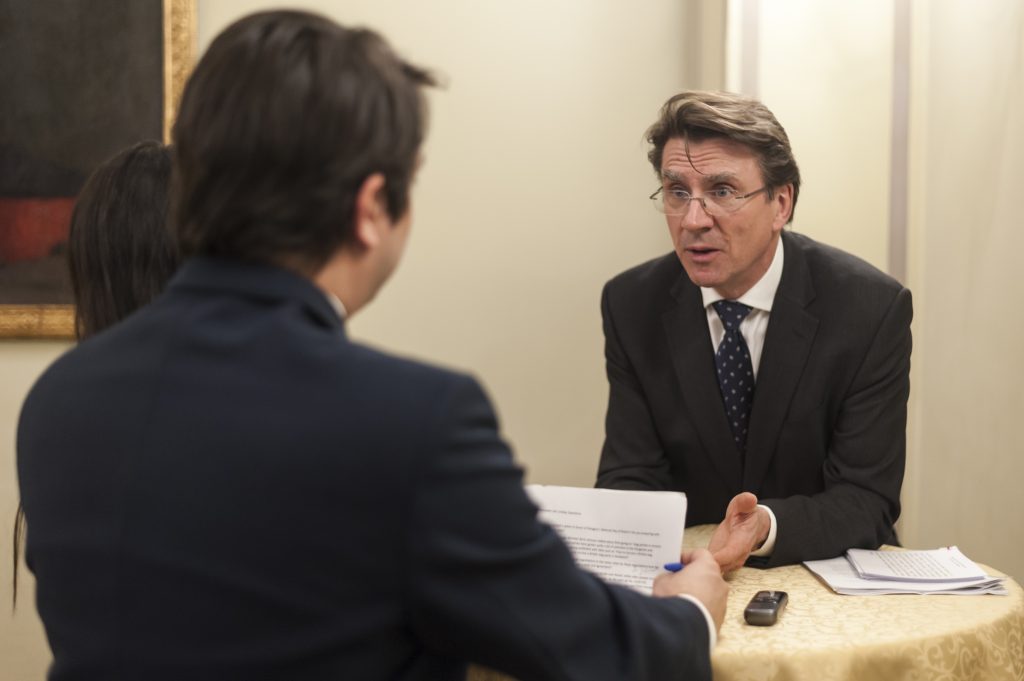 It was recently revealed that American-Hungarian billionaire George Soros donated 400,000 pounds to “Best for Britain,” a campaign intending to roll back Brexit. Does the May government view this as “interference” in British affairs?

What is your reaction to the Orbán government’s numerous billboard campaigns directed against George Soros?

Hungary is a European democracy. In European democracies, people express their views. It is not the British government’s position to start expressing views about how Hungary should run its democracy. The reality is, in election campaigns, politicians make their views known. The same happened in the referendum campaign in Britain. If you live in a vibrant democracy, and it strikes me from what I saw of the comments over the weekend, the speeches by opposition leaders here, Molnár, Szél, Karácsony, all making very strong positions, the government making its positions clear, this seems to me that this is a very vibrant democracy.

Then the British government hasn’t expressed, in the same way that Mr. Kostelancik at the American embassy has, concern over a number issues such as the NGO law, CEU, and the rule of law?

There are some issues here that we find concerning, but we express our views privately to the Hungarian government. We don’t believe, particularly with a European Union partner, that it’s appropriate to talk about these things publicly. 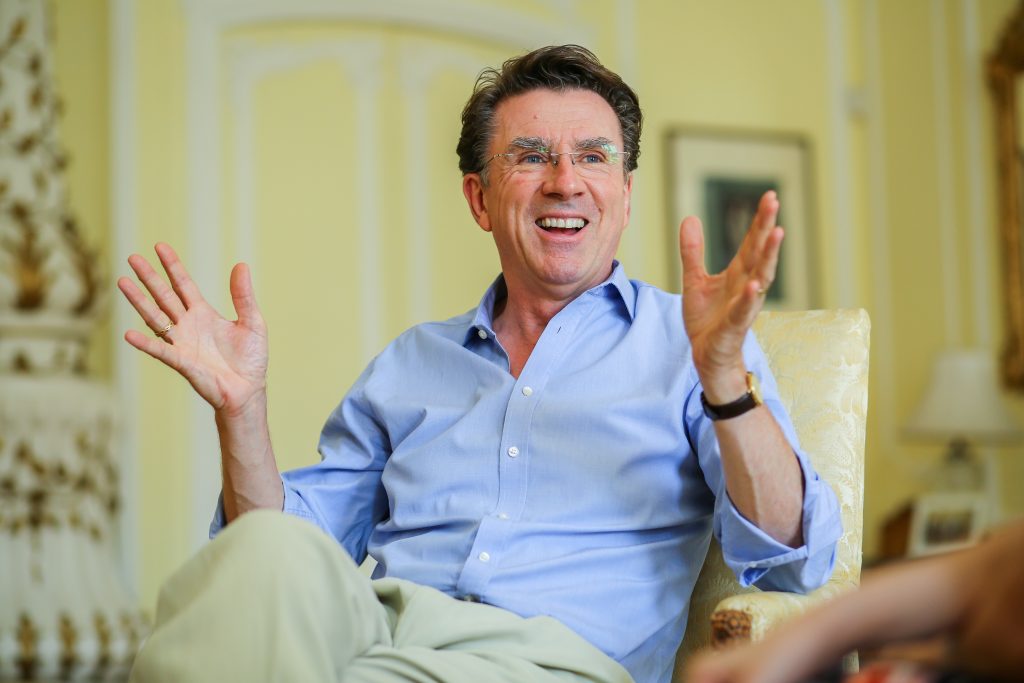 If it is because of his love of Hungarian culture or of his dedication to Hungary’s poetry, Iain Lindsay was very popular as the United Kingdom’s (UK) ambassador in Hungary. Due to his activity on social media, he is still present in peoples’ minds, and just recently surprised his followers with a delightful performance of […]
Guest Writer 2022.07.14. 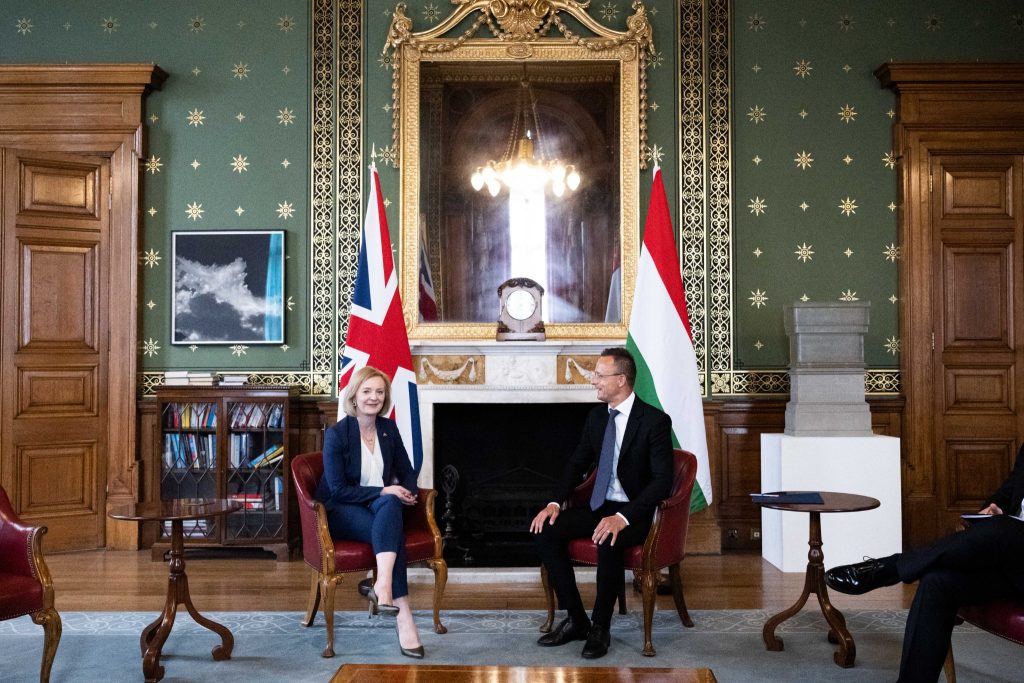 Hungary and the United Kingdom have laid the foundations of cooperation based on mutual respect following the UK’s exit from the European Union, Foreign Minister Péter Szijjártó said in London on Tuesday. Europe is in a critical period, facing serious challenges, Szijjártó emphasized at the inauguration of the Hungarian consulate’s new building in London. “We […]
Péter Cseresnyés 2022.07.06.