Hungarian-Turkish Accord On Renewal Of Historic Turkish Shrine In Buda

Speaking in front of a 16th-century Turkish shrine in the Buda Hills on Thursday, Minister for National Economy Mihály Varga praised endeavours by Turkey and Hungary to preserve the memory of one another’s heroes, saying that these prove to the world that Hungary and Turkey turn to each other with mutual respect. Turkey keeps alive the memories of such figures in Hungarian history as Lajos Kossuth or Ferenc Rákóczi, who, as exiles, spent decades and died in Turkey, while Hungary does the same for Gül Baba, a Turkish dervish that died in Buda in 1541 and whose tomb has become a revered site, Mr. Varga said after the two governments signed an accord aimed for reconstructing the Gül Baba monument.

The Minister for National Economy recalled that the government had declared the tomb’s reconstruction a cause of special importance to the national economy, adding that a large number of memorial sites have been renovated and established together with Turkey. These include the Park of Turkish-Hungarian Friendship at Szigetvár, the memorial site at Mohács and the Eger minaret, which is the northernmost such building in Europe. Gül Baba’s tomb will stand out among these, he said, pointing to the “impressive, compelling and worthy” renovation plans.

Hungary is financing the revamp of the park surrounding the shrine while Turkey will take care of the reconstruction of the building and its immediate surroundings. Reconstruction works will begin after the necessary approvals are obtained and Gül Baba’s tomb is expected to be completed in its renewed form by 2017. The investment will cost around HUF 2.5 billion. 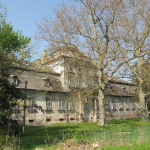 Prime Ministers’ Family Palace To Be Converted Into Memorial Site