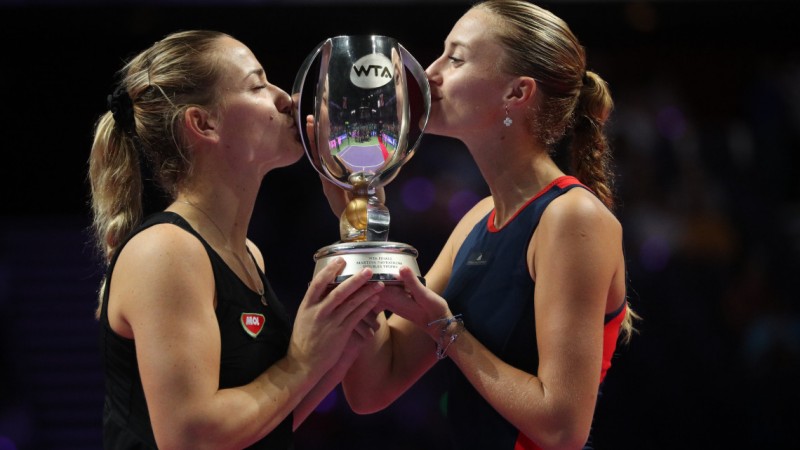 Babos and Mladenovic, both 25 years old, earned their third title of the year with their 84-minute victory. The No.2 seed duo added the WTA title to their 2018 Australian Open championship win, by defeating the Wimbledon and Roland Garros (French Open) winner Czechs  6-4, 7-5, in the final. Babos emerged with the Singapore trophy for the second year in a row, having won the WTA Finals last year alongside Andrea Sestini Hlavackova from the Czech Republic.

Babos and Mladenovic first came to Singapore together, each qualifying for their first WTA Finals in 2015. The duo split soon after, only to reunite in 2018. Babos said they “are so much better now” as they spend a lot of time together outside the court as well and “every time we have tougher moments, we just come back stronger.” She added

We are here with the best players, doubles players and of course singles players in the world. It’s just an amazing story and feeling, and to share it with Kiki and to live through these moments together, it’s very, very special. I’m really, really glad to be part of this story.

Babos and Mladenovic are Planning to stay together as they aim to take the WTA Doubles No.1 ranking in 2019. They are now ranked on the third place.

Mladenovic said about their work together that she thinks they are “perfect match for the doubles game, and we just (…) our communication is good” adding that “doubles is going so fast that sometimes you don’t really have time to call the balls and to communicate, and I feel like we feel each other’s mindset.” Babos simply added: “our games are matching, big time.”