Hungarian state officials addressed events marking the March 15 national holiday organised by ethnic Hungarian communities in the US and Canada over the weekend.

Ministerial commissioner at the prime minister’s office Péter Szilágyi told an event in Los Angeles on Sunday that “March 15 is a symbol of unity that transcends our differences.” A statue of King Stephen who is considered to be the founder of the Hungarian state was inaugurated during the event held in a local church named after the king. In his speech, Szilágyi highlighted the participation of Hungarian emigrants who fled after 1849 in the American Civil War.

State secretary in charge of ethnic Hungarian communities abroad Árpád János Potápi addressed events in Edmonton and Calgary in Canada on Saturday and Sunday. He said Hungarians disliked being told by others how to live their lives and described March 15 as “the birthday of Hungarian freedom.”

Referring to the upcoming European parliamentary election, he said that Hungarians can decide in May whether “we can protect our sovereignty from oppressive European powers or have to implement a central plan”.

Potápi told MTI that he had met local ethnic Hungarian leaders in Edmonton and Calgary, and visited churches and weekend schools. He said it was uplifting to meet young children who sometimes spoke better Hungarian than their parents and this was “partly thanks to the weekend schools operated with support o the Hungarian government”. 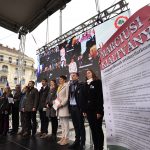