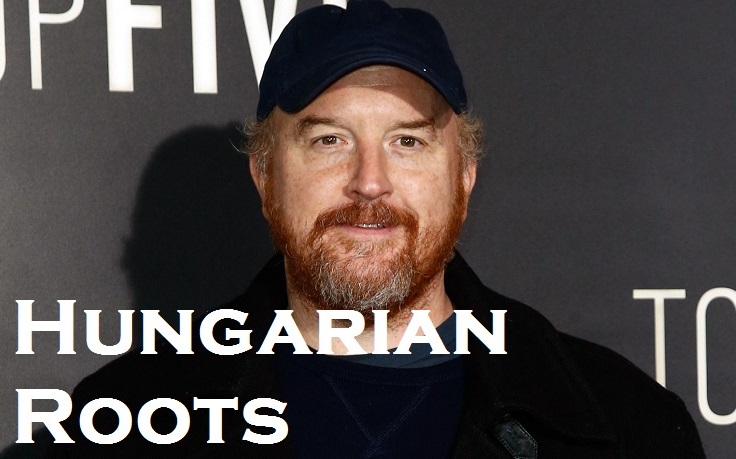 In our weekly series we write about celebrities – artists, actors, musicians, sport stars and scientists – who have some Hungarian origin, yet only few would consider them as “par excellence Hungarians”. In many cases even the person concerned knows/knew only very little about his or her Hungarian roots, while others are/were proud of their “magyar” background despite lacking the ability to speak the language of their parents or grandparents. Our seventh target is:

Louis Székely, better-known professionally as Louis C. K., is the American comedian, actor, writer, producer, director and editor famous for the acclaimed FX comedy-drama series “Louie”. But did you know that his stage name is the approximate English pronunciation of his Hungarian surname, Székely (pronounced [ˈseːkɛj])?

That’s no coincidence – perhaps one of the world’s best-ever comedians is partly of Hungarian heritage. His parents, Marie Louise Székely (née Davis) and his father Luis Székely met at Harvard University. Mexican-born Luis earned a degree from the National Autonomous University of Mexico prior to graduating from Harvard. C. K.’s paternal grandfather, Dr. Géza Székely Schweiger, was a Jewish Hungarian surgeon whose family emigrated to Mexico, where he met his Catholic wife.

Born in Washington DC, C. K. spent his early childhood in Mexico but then moved back to the United States with his family, who settled in Moscow. His parents divorced and when he remarried, his father converted to Orthodox Judaism, the faith of his new wife. The comedian’s whole family still lives in Mexico – his paternal uncle Dr. Francisco Székely is an academic and an international consultant on environmental affairs who served as Mexico’s Deputy Minister of Environment between 2000 and 2003.

The young C. K. spoke Spanish as his first language until he moved back to the U.S and learned English. He began his career writing for several comedy shows in the 1990s and early 2000s for comedians like David Letterman, Conan O’Brien, and Chris Rock. Also in this period, he was directing surreal short films and went on to direct two features—Tomorrow Night and Pootie Tang—before he starred in the short-lived HBO television sitcom Lucky Louie. Four years later, he starred in the first season of Louie, which brought him critical acclaim. He has had supporting acting roles in such feature films as The Invention of Lying (2009), American Hustle, Blue Jasmine (both 2013), and Trumbo (2015).

He released his debut comedy album, Live in Houston, in 2001 directly through his website and became among the first performers to offer direct-to-fan sales of tickets to his stand-up shows, as well as DRM-free video concert downloads, via his website. C.K. has released 9 comedy albums in his career and often directs and edits their comedy specials.

C.K. has won a 2012 Peabody Award and six Emmy awards, as well as numerous awards for The Chris Rock Show and Louie, as well as his stand-up specials Live at the Beacon Theater (2011) and Oh My God (2013). His comedy album Live at Madison Square Garden won Best Comedy Album at the 58th Annual Grammy Awards.Rolling Stone ranked C.K.’s stand-up special Shameless number three on their “Divine Comedy: 25 Best Stand-Up Specials and Movies of All Time.”

Shot in 2014, the comedian’s six-part story about his character Louie’s love affair with a Hungarian woman who doesn’t speak English was brilliantly bittersweet. It explored a lot of what it means to have feelings for someone, what sex does and doesn’t mean with romance, feelings of loss, and perhaps most poignantly, what communication means between two people.

Most recently, he stealed the show at the Academy Awards gala ceremony, presenting the Oscar for the best documentary. C.K. managed to bring a moment of authentic appreciation to a easily overlooked category—those short documentaries that, as he observed, are almost always passion products: