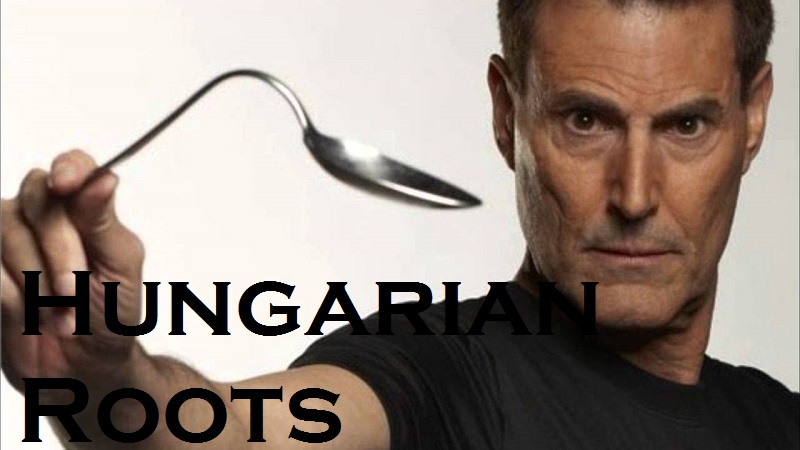 In our weekly series we write about celebrities – artists, actors, musicians, sport stars and scientists – who have some Hungarian origin, yet only few would consider them as “par excellence Hungarians”. In many cases even the person concerned knows/knew only very little about his or her Hungarian roots, while others are/were proud of their “Magyar” background despite lacking the ability to speak the language of their parents or grandparents. Our thirteenth target is:

Did you know that the man known internationally as the “spoon bender” since the Seventies has Hungarian heritage through his father and also speaks the language well?

The Mindbender, as he is called in the title of a 1996 biographical film, was born on 20 December 1946 in Tel Aviv, then part of British-administered Mandatory Palestine. His mother and father were of Austrian-Jewish (although born in Berlin) and Hungarian-Jewish background respectively. He is the son of Itzhaak Geller (Izsák Gellér) and Manzy (Manci) Freud and, on behalf of his mother, apparently a distant relative of Sigmund Freud. His parents fled Hungary from Hungary, settling in Palestine on modern-day Israeli territory, where Uri was born. He is proud of never having forgotten his Hungarian roots and was taught Hungarian by his mother. After his parents divorced, his mother remarried to Ladislav Geo, a Jewish pianist of Hungarian background, and the family moved to Cyprus. Having joined the Israeli Army’s Paratroopers’ Brigade, he later worked as a photographic model in 1968-1969, during which he began to perform to small audiences as a nightclub entertainer, becoming well-known in Israel.

Geller first started to perform in theatres, public halls, auditoriums, military bases and universities in Israel.] By the 1970s, Geller had become known in the United States and Europe. He also received attention from the scientific community, whose members were interested in examining his reported psychic abilities. At the peak of his career in the 1970s, he worked full-time, performing for television audiences worldwide.

He has been married to his wife Hannah for close to 40 years, although first in an informal manner. Latter, the couple pledged eternal faithfulness to each other in a formal ceremony – appropriately held in Úri utca in Budapest’s Castle District.

Although Geller has claimed his feats are the result of paranormal powers given to him by extraterrestrials, but critics such as James Randi have shown that Geller’s tricks can be replicated with stage magic techniques.

In 2013, a BBC documentary, The Secret Life of Uri Geller – Psychic Spy? featured Uri Geller, Benjamin Netanyahu, Christopher ‘Kit’ Green, Paul H. Smith, Harold Puthoff and Russell Targ. Controversially, the documentary claimed Geller became a “psychic spy” for the CIA, was recruited by Mossad, and worked as an “official secret agent” in Mexico, being a frequent guest of President José López Portillo. In the film, Geller claims to have erased floppy discs carried by KGB agents by repeatedly chanting the word “erase”.

The author of 16 fiction and non-fiction books, Geller is trilingual (he speaks fluent Hungarian, Hebrew and English) and lives in the village of Sonning-on-Thames, Berkshire, England.