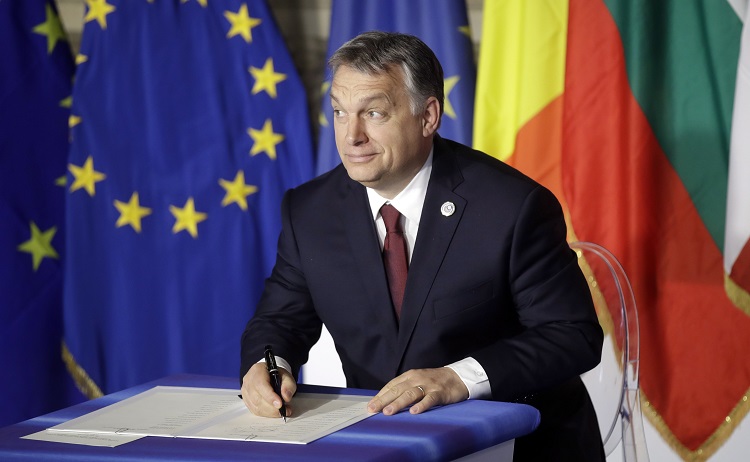 Europe can be set right only if every nation sees to its own security and welfare, Hungarian Prime Minister Viktor Orbán said in Rome on Saturday after the leaders of the European Union signed a declaration on the bloc’s future, which he called a “good document”. 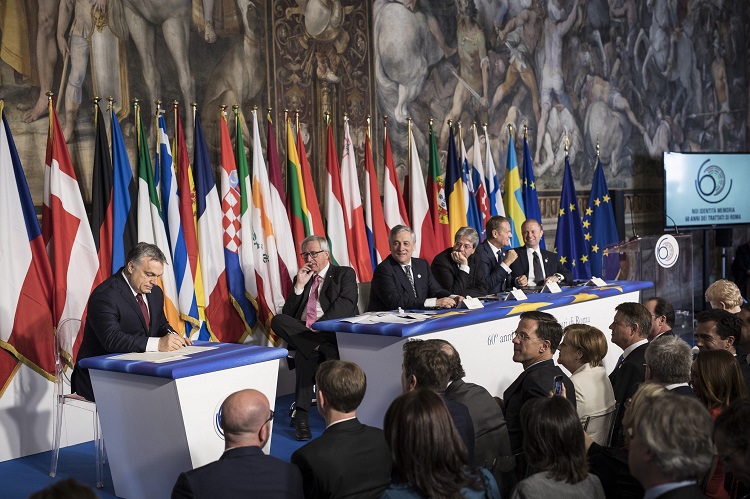 “If we want a secure Hungary then we must rely on ourselves and we have to make our own security,” Orbán said, adding that if Hungary also wants to develop economically, then “we must do more, and work well and be competitive”. The prime minister said “no kind of celebratory declaration will change anything”, referring to the document marking the 60th anniversary of the founding Treaty of Rome. “We can only be proud of Europe if we can be proud of our own countries,” he added.

Viktor Orbán said there was much to be proud of when drawing the balance of the past 60 years in Europe but big question marks also hung over the bloc. “We have reason to feel that we must respond to big challenges.” He said Hungarian proposals had been incorporated into the document and “from the point of view of the interests of Hungarians, this is a good document”. Orbán referred to passages on the importance of protecting the EU borders and that member states themselves should provide answers to Europe’s problems rather than waiting for the institutions of Brussels to do so.

The Hungarian Premier emphasised the importance of taking steps against illegal migration and tackling terrorism. Further, he noted a commitment to creating jobs. “Today, Hungary is the only country in the European Union that has targeted full employment,” the prime minister said, adding that “it is not from benefits that people can expect a higher standard of living and a successful Hungarian economy, but through their own workplaces.”

Viktor Orbán said the Visegrad Group of countries was completely unified on the issue of jobs: it is not through immigration that workplaces should be filled but through family-friendly policies and a work-based society. The prime minister said there were passages in the declaration that deviated from this line, but in terms of the rules governing an alliance of 27 countries, this state of affairs was valid in such a document. 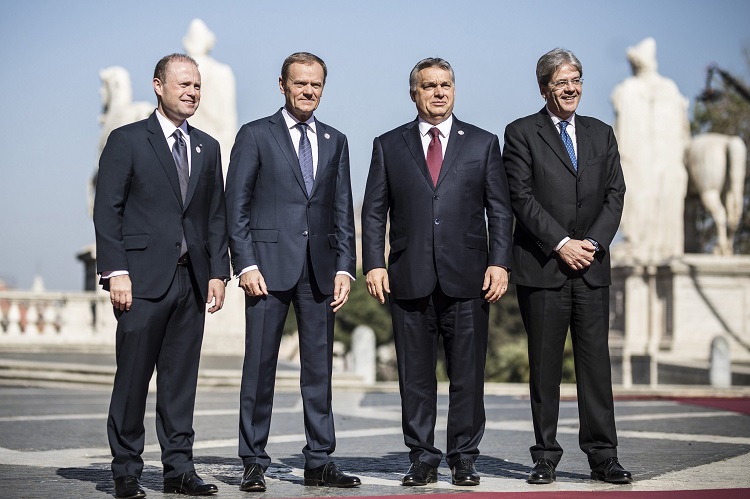 In response to the Rome declaration, the Hungarian Socialist Party (MSZP) said the majority of Hungarians favoured the EU. Socialist MEP István Ujhelyi said in a statement that anyone who works to weaken the bloc works against the will and interests of the Hungarian people.

The leftist Democratic Coalition (DK) said in a statement that it backed the idea of a united states of Europe. Ferenc Gyurcsány, the party’s leader, said Orbán today had “squirmed in the presence of European leaders like a Judas” because instead of democracy he had advocated illiberalism, and instead of a free press he supported party propaganda. Instead of diversity he wanted ethnic homogeneity, and in place of clean competition, he chose his “corrupt and untalented mates”, he added.

Green party LMP leader Bernadett Szél said in a statement that LMP believed it was important that the government should clarify its relations with the EU and that parliament should put faith in a better, more effective, more just and more united EU.

The Együtt (Together) party said in a statement that Orbán represented a hypocritical type of politics in relation to the EU while the Liberals expressed concern about the future of the bloc.