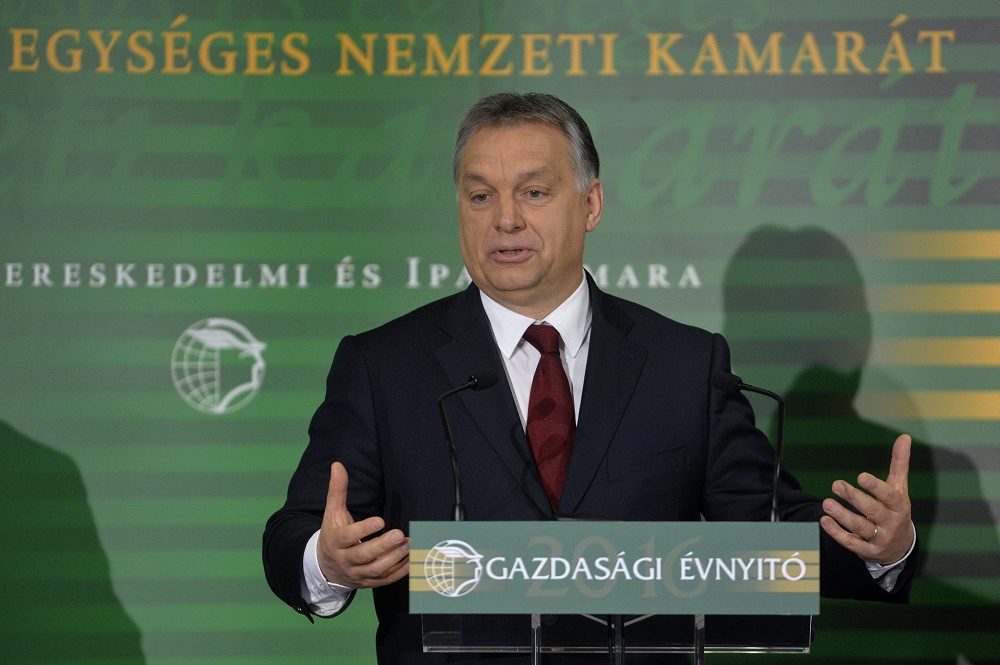 Speaking at the Hungarian Chamber of Commerce and Industry’s business year-opening event, the Hungarian Prime Minister said his cabinet was seeking to draft a budget for 2017 in which borrowing is only be permitted for development purposes, with the state not being allowed to spend more than the funds at its disposal on operating and maintenance costs. Viktor Orbán also said the European Commission “destroyed” the Hungarian benefit voucher system, and therefore it is necessary to consider the possibility of making the “concealed” dual remuneration system more open. 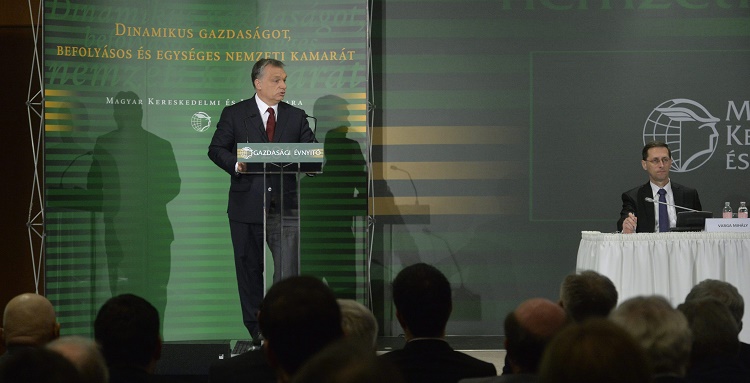 By “dividing in two” next year’s budget through the separation of operating and maintenance expenditure from development expenditure, Viktor Orbán said that in one to two years’ time we may reach a point at which the entire budget is “a genuinely zero budget”: one in which there is no deficit – or, if anything, there is a surplus. In his words, the way to achieve a reduction in the country’s sovereign debt in absolute terms is that “We do not spend more than our revenues allow”. Among the interests for the Hungarian economy, the Prime Minister mentioned raising Hungary’s economic growth rate to above 3 per cent. In his view, Hungary should try “to raise the rate of growth to the level of 3 per cent” by the end of this year.

As for the the Hungarian benefit voucher system, the Prime Minister said that in such a system “there is a basic salary, which is subject to the normal state contributions, and beyond this there is another sum which is exempt from such contributions”, he said. “Let us begin by immediately converting benefit vouchers into cash from 1 January 2017”, he said. PM Orbán believes that “if the EU decision means that the benefit voucher scheme cannot be maintained, it would be simpler for us to provide these benefits in cash”. He remarked that today this is the only method which permits a pay rise in excess of economic growth, but it must be accepted that this amount will not count towards peoples’ pensions. Orbán said he believes that in such a dual remuneration system there could be a risk that “innovative Hungarian entrepreneurs may push” basic salary into the second category. Regarding wages, he confirmed that there must be economic reserves behind pay rises.

In his speech Viktor Orbán also announced that the Hungarian government is introducing a new decision-making mechanism for EU calls for proposals. He said that warding off the threat of migration may result in an enormous competitive advantage. Outlining a decision adopted by the Cabinet the previous day, the Premier said that a new decision-making mechanism will be introduced for EU calls for proposals. Based on this, the former outsourced decision-making system will be phased out, and a public list will be released of a group of call assessors comprised of state administration employees, who volunteer for these tasks in return for additional salary. Viktor Orbán noted that this mechanism – in which these officials will assess all proposals – will be faster and more transparent.

Regarding EU funds, he confirmed his position that Hungary does not owe a debt of gratitude for the EU funds provided to the country. This is not a gift, but a “well-conceived joint business interest”, he said. Orbán also said that the Government has launched Europe’s largest industrial park development programme. Over a period of 30 to 36 months an estimated HUF 150 billion will be invested in construction of new industrial parks and enlargement of existing ones.

Regarding Hungary’s public works programme, the Prime Minister drew attention to the fact that there are still eligible people – some 200,000 – who are not even participating in public works projects, despite the fact that in 2017 Hungary’s budget will be able to raise sufficient funds to provide jobs for everyone. Therefore a new form of employment will need to be introduced, with even lower requirements for those who are not fit enough to find jobs in the current public works projects, he said. Among the secondary benefits of public works, Viktor Orbán mentioned that fewer people are involved in criminal activity, fewer people are in prisons, and children who see their parents go to work every morning are growing up in a different environment.

Viktor Orbán also mentioned young Hungarians living abroad, saying that it is simply impossible to prevent adventurous and enterprising young people going abroad. In his view, the question is whether they will return to their native land. In order to achieve this, we need some “nous” and good economic policy, he said.