A left-wing commentator welcomes the anti-government demonstrations and encourages Hungarians to take to the streets. A pro-government columnist thinks that protesting against the higher ceiling placed on overtime hours is senseless at a time of significant labour shortages.

In Népszava, György B. Nagy calls on the population to defy the old adage that Hungarians are a ‘sheep-like people’ who never revolt against injustice. He praises the parliamentary opposition for having exercised ‘factual obstructionism’ during last week’s vote on the bill which raised the ceiling on overtime work from 250 to 400 hours a year and welcomes the increasing number (up to 15 thousand) who have demonstrated daily against the government. The régime, he writes, can only be shaken by a movement that grows outside parliament. He urges the discontented to ‘stand up from their armchairs and kitchen stools’ and take to the streets.

On Mandiner, Gergely Szilvay is dismayed by the first open appearance of real communists on the streets of Budapest, as they have joined the anti-government demonstrations, along with radical right-wingers, and mainstream opposition politicians and supporters. As for the reason that sparked the series of demonstrations, Szilvay finds it absurd to call the latest amendment to the Labour Code ‘a slave law’, since employees are of course free to move to new workplaces of their choice. He also dismisses the argument that although overtime work is conditional on written consent by the employees, the employers can easily have their way. With today’s labour shortage, which was precisely the reason for the new law, the workers’ bargaining position is significantly stronger than usual – he concludes. 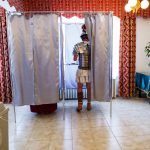