In Magyar Idők, László János Szermán describes the Overtime Bill protests in Budapest as a ‘free time activity’ of a couple of hundred ‘hardcore troublemakers’. The pro-government columnist thinks that the highly diverse demonstrators, who include far-right groups, anti-fascist organizations, the left-wing opposition parties as well as Jobbik politicians, are too heterogenous to put forward clear political goals. Szermán contends that the protesters are just a formless mob, prone to violence, which lacks both leadership and vision.

On Mandiner, Szabina Hausar also thinks that the protests want trouble for its own sake rather than any tangible political aims. Despite their radical voice and violent actions, the demonstrators are unlikely to lead to the failure of the Orbán government, the blogger believes. She adds that protesters employ violence in the absence of real goals.

In Figyelő, Zoltán Udvardy likens the anti-government protesters to the ‘Lenin boys’, the Communist squads active in the short-lived 1919 Hungarian Soviet Republic. The pro-government believes that the professionally organized demonstrators and the unions have failed to mobilize workers, and thus their attempted ‘putsch’ has utterly failed. In conclusion, Udvardy hopes that the government will make no concessions to them.

Liberal commentators underscore that both the anti-government protesters and the police seem to be more radical and willing to use violence than in previous years.

Index’s András Dezső contends that the police has used identification methods that are not in-line with Hungarian regulations, and in general they are less tolerant with the demonstrators, while the protesters are also provoking them more than before.

444.hu’s Zoltán Haszán and Gergő Plankó recall that protesters are much angrier and less peaceful than before, while the police are more willing to use tear gas.

In Mérce, Nóra Diószegi-Horváth believes that the protests create the opportunity for setting up a broad anti-government coalition. The alt-left blogger finds it reassuring that unions and opposition parties as well as young urban liberals are protesting shoulder to shoulder against the government. Such cooperation, Diószeghi-Horváth hopes, can create the grounds for a strong anti-government coalition, provided the current wave of discontent can be channeled and given clear political objectives.

Heti Világgazdaság’s Zoltán Horváth also thinks that the protests may indicate a turning point in the mobilization strategy of the opposition. The left-wing liberal pundit acknowledges that only a relatively small group of people demonstrate, but he nonetheless finds it reassuring that both opposition parties and trade unions have joined them. If the mobilization proves successful, the protests may channel and unite the general dissatisfaction in Hungary with what Horváth dubs the government’s corrupt ‘national feudalism’.

In 168 Óra, Zoltán Lakner underscores that young intellectuals are protesting in defence of the interests of blue collar workers. The left-wing analyst also thinks that the joint efforts of diverse groups may lead to the creation of a broad anti-government movement. For this, it is essential that the government’s attacks on democratic institutions are linked to the welfare related problems of workers, Lakner notes.

Magyar Narancs in a front page editorial encourages the demonstrators and the opposition to keep up the good fight. The left-wing liberal weekly contends that unless the opposition uses ‘tough means’ in its protests, Hungary will indeed be transformed into a land of slaves. 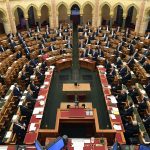