A libertarian pundit finds it sad that the completion of the House of Fates, originally scheduled for inauguration four years ago, is taking so long. He thinks that more transparency concerning the planned exhibits could help to resolve the debates over the new museum. Meanwhile, a historian who helped devise the House of Fates project four years ago writes that the controversy around the exhibition, which will be devoted to the memory of Holocaust child victims, is an expression of emotions rather than facts.

Background information: The government has announced that the House of Fates museum to educate young generations about the horrors of the Holocaust (see BudaPost October 14, 2014) will finally open in 2019. The exhibition, which is supervised by the EMIH Unified Hungarian Jewish Congregation has been criticized by left-leaning intellectuals as well as the Association of Hungarian Jewish Faith Communities (MAZSIHISZ).

In Heti Világgazdaság, László Seres finds it sad that due to angry disputes, the completion of the House of Fates project has been delayed for years and argues that the government should be given a chance to finally finalise the project. The libertarian columnist whose grandparents were murdered in the Holocaust, believes that it is the duty of the Hungarian state to commemorate the Jewish victims of the Holocaust who were murdered with the help of the Hungarian authorities in 1944. Seres finds the whole dispute over the project rather disappointing. He points out that critics have condemned the project without knowing the details of the planned exhibit and urges the government and EMIH to publish the details. The absence of proper information on the exhibition fuels the highly opinionated debate and clash of raw partisan opinions, Seres warns. He nonetheless hopes that the House of Fates will promote proper Holocaust remembrance and will offer a fair perspective on the Holocaust.

On 24.hu, András Gerő, a professor of History at Central European University and director of the government-sponsored Habsburg History Institute, argues that the House of Fates project will boost resilience to anti-Semitism and spread knowledge about the Holocaust, therefore the fierce opposition organized against it by intellectuals at home and abroad is irrational and counter-productive. The Museum should have been inaugurated four years ago, to commemorate the 70th anniversary of the Hungarian Holocaust, and Gerő criticizes the government for freezing the project in response to international pressure. ‘I have rarely seen such inconsistency on the part of a government’, he writes. Gerő explains that the planned exhibition will be mainly targeted at the younger generations and is intended to explain to them in a way they can understand the fate of the tens of thousands of innocent children murdered in 1944. After the visit they can research all aspects of the Holocaust and its antecedents in the adjacent documentation centre. The House of Fates complex will also include an educational centre where students will attend classes and where teachers will be offered specialized training on Holocaust subjects. Gerő hopes that this time the project will not be suspended. The editors of the left-wing site invite readers to contribute to the debate.

“A love story” – Mária Schmidt on ‘House of Fates’ 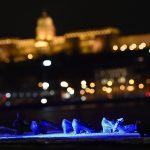