Background information: Momentum MEP Anna Donáth in a discussion organized by the Progressive Slovakia party said that Hungarians in Slovakia can be proud of their Slovak identity too. Donáth welcomed the decision of the Progressive Slovakia and Together party (alliance of two parties running together in next February’s general election in Slovakia) to nominate joint Hungarian candidates in the forthcoming Parliamentary election. In a Facebook post, Donáth explained that she understands the trauma of the 1920 Trianon Peace Treaty, and expressed hope that national enmity can be overcome through dialogue and respect for the Hungarian minority’s cultural rights.

Magyar Nemzet’s Tamás Pataki accuses Donáth as well as Momentum leader András Fekete-Győr of betraying Hungarians living in the neighboring countries. Last week, Fekete-Győr endorsed the candidate of the National Liberal Party in the Romanian Presidential election rather than Hunor Kelemen, leader of the Hungarian RMDSZ minority party, claiming that Kelemen has no chance of reaching the second round of the election. On the day (Sunday 11 November) Hunor received slightly more than 4 per cent of the votes, and did not make it to the second round, while Dan Barna of the Save Romania Union received 14 per cent, and also failed to get into the run-off on 24 November. Pataki believes that Momentum politicians weaken transborder Hungarian minority politicians and parties. If the minority institutions and Hungarian representation weakens, the Hungarian minority in Slovakia and Romania will soon die out, the pro-government columnist writes.

In Népszava, István Pion finds absurd the suggestion that Slovak liberal parties supporting Hungarian minority candidates want to divide the Hungarian community in Slovakia. The left-wing columnist recalls that Hungarians in Slovakia are already divided, and no single party can represent Hungarians in the country. Pion thinks that cooperation with minority-friendly Slovak parties will help Hungarians to achieve their aims and maintain their language and culture more than supporting Hungarian ethnic parties. 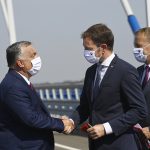