A left-wing commentator accuses Prime Minister Orbán of turning his back on the ideals of the 1956 revolution. A pro-government columnist finds such accusations absurd.

Népszava’s Róbert Friss accuses Prime Minister Orbán of betraying the heritage of the 1956 revolution. The left-wing commentator thinks that the Prime Minister’s decision to give a speech in the Liszt Academy was intended to limit the size of the audience and protect him from discontented people. Friss believes that Fidesz has long abandoned the values the 1956 revolutionaries stood for – most importantly, of a free society. Friss suspects that the Prime Minister is becoming less and less popular and increasingly isolated.

In Magyar Nemzet, László Néző likens the Socialist and Liberal leaders who used the police against demonstrators in 2006 to the suppressors of the 1956 revolution. The pro-government commentator finds it absurd to accuse the government of a propensity towards dictatorial methods. Néző thinks that the victory of opposition candidates in major cities in the municipal election, as well as the peaceful October 23 celebrations, prove that Hungary is a free and democratic country. He adds, however, that part of the Hungarian public seems to have forgotten how corrupt and dictatorial the former Socialist-Liberal governments were before 2010. 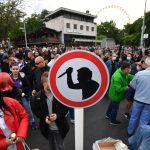