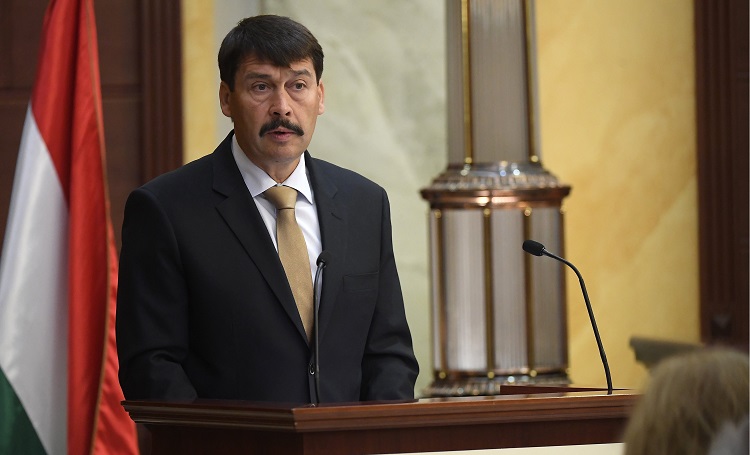 Yesterday, President of the Republic of Hungary János Áder sent a recently passed law aimed at restricting political advertisements outside of campaign seasons back to parliament for reconsideration.

The proposed legislation, which was passed by a simple majority of the parliament on Wednesday, was part of a bill brought forward by the Orbán government which sought to prevent all political advertisements on billboards outside of the official campaign period.

Portions of the proposed law which required a two-thirds majority had failed in Wednesday’s vote.

The legislation was hotly opposed by opposition parties ranging from the left-wing Democratic Coalition and the Socialists to the far-right Jobbik on the grounds that it would stifle political freedom in the country.

In a letter to parliament explaining his decision to return the bill, President Áder said the proposed legislation failed to “establish a legal norm”; in addition, he expressed his view that the law, as he received it, contains passages which are either controversial, or unimplementable. The President formally called on the parliament to reconsider the bill in its entirety.

In his letter, Áder expressed his view that

Hungary is an independent and democratic state governed by the rule of law and a fundamental requirement is legal certainty.

He added that legal texts should be clear and reasonable, expressing “recognizable” norms for legal application.

Later in the day, Speaker of the House László Kövér addressed Áder’s decision, saying that the ruling Fidesz-KDNP coalition would not give up on their original proposal, and would make efforts to secure the two-thirds of parliamentary votes necessary to bring the bill into law.

The Speaker said that the legislation had been stripped of its crucial parts due to failure to pass the portions requiring a two-thirds majority, and had become “a meaningless heap of letters.” In light of this fact, Kövér said that “all Áder could obviously do” was to send it back.

Defending the original planned legislation, Kövér claimed that its restrictions were aimed at shortening campaign periods, as well as preventing parties from becoming indebted to various business circles.

And today, Lajos Kósa, Fidesz’s parliamentary group leader, told state media channel M1 that he has been given permission by his party to initiate a special session of parliament in connection with the “billboard law.”

Kósa noted that that MPs have six days to respond to President Áder’s concerns. Parliament will aim to make a final decision on the law in its special session, he said.

Echoing Speaker Köver, Kósa said it was understandable why the president had sent the law back, noting that stipulations of the law which required a two-thirds majority had failed in Wednesday’s vote and only the ones that required an absolute majority passed. The latter stipulations were solely about “the law’s entry into force and the re-numbering of its sections”, he said.

Today, President Áder signed into law a bill passed by the Hungarian parliament on May 13th which will require civil society groups and NGOs receiving foreign donations above a certain threshold to register as organizations funded from abroad.

Commenting on his decision to sign the controversial legislation, Áder said

I do not see any public law or constitutional concerns, that would be true obstacles to the law’s promulgation.

In a statement, the president referred to civil organizations as “indispensable and respectable” players of a democracy and noted their activities ranging from promoting human rights through environmental protection to welfare services. He said that Hungary had over 56,000 civil organizations and insisted that 99 percent of them would be left unaffected by the new legislation.

The new anti-NGO law has generated intense controversy, and it comes following months of attacks by Prime Minister Viktor Orbán’s government on civil society groups that receive funding from Hungarian-American billionaire George Soros. In a recent talk, Soros referred to the Orbán government as a “mafia state”; the Hungarian Premier responded in kind, claiming that Soros “network” is the true “mafia.”

The law also comes on the heels of the Orbán government’s “Lex CEU” higher-education amendment, which critics say is an open attack on the Central European University, an English-language private university in Budapest founded by Soros 25 years ago. The “Lex CEU” has triggered international condemnation, as well as widespread support for a university that routinely ranks as the best in Hungary in fields it offers, as well as one of the best in the region

Following the law’s passage in parliament, two Hungarian NGOs that receive foreign funding, the Civil Liberties Union (TASZ) and the Hungarian Helsinki Committee, indicated that they would engage in civil disobedience and not register, which human rights groups have described as a

a vicious and calculated assault on civil society.

Responding to the NGOs decisions, PM Viktor Orbán claimed in his Friday morning radio talk that “there is no such thing in the Hungarian legal system” as civil disobedience, and that these groups would have to follow the law. This comment has since been echoed by several other Fidesz politicians and ministers.

Ironically, Orbán himself led an instance of civil disobedience in 2007, when he and his party took apart a fence surrounding Budapest’s Kossuth Square that had been placed by the then ruling Hungarian Socialist Party (MSZP)