The Federal Union Of European Nationalities (FUEN) was founded in the Palais de Chaillot in Paris on 20 November 1949. The first “Congress of Nationalities” was attended by around 200 people. The participants felt closely connected to the ideas behind the Council of Europe, which was established in 1949 as well. Very soon, it became clear that the regionalists and the people representing the national minorities and language minorities had different interests and pursued different goals. Over the years, FUEN has lived on, as an umbrella organization for the autochthonous, national minorities and ethnic groups in Europe.

At the 61st Annual Congress of FUEN, held in Wrocław/Breslau, Poland – the European Capital of Culture in the year 2016 -, the organisation elected a new president. On the 21th of May 2016 Lóránt Vincze received the trust of the Congress to lead the organization. The Hungarian nominee, who previously served as the foreign secretary of the Democratic Alliance of Hungarians in Romania (RMDSZ), Romania’s largest ethnic Hungarian party, won with 89 votes. This is the first time in history that FUEN has a president who is Hungarian from Transylvania. 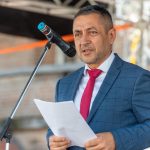