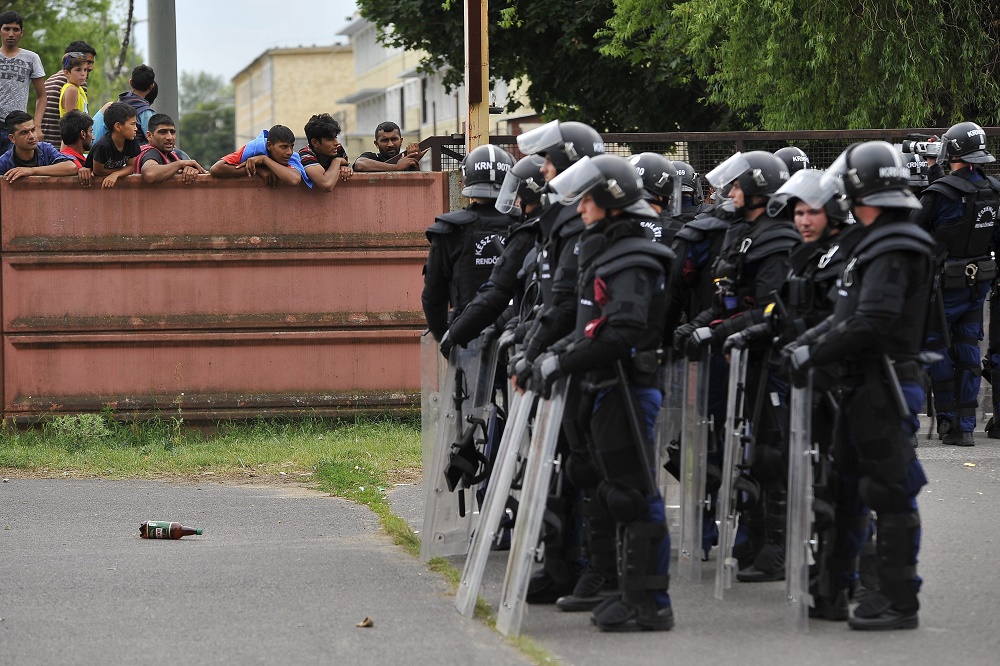 A conflict of a religious nature between two refugees at the Debrecen camp was allegedly behind the altercation that happened on a nearby road on Monday afternoon. About 100 migrants staying at the refugee camp in Debrecen, in eastern Hungary, started throwing stones at cars passing by on road 471 and beating the vehicles with sticks, according to eye-witnesses. There have been no reports of any injuries, MTI’s local correspondent said from the site.

Later, police said one officer took a hit from a stone and was slightly injured. Police appeared in raid gear and managed to drive the refugees back into the camp, behind a fence where they remained in a line, facing police and shouting, the correspondent said. The conflict turned violent after 2.30 pm when two refugees engaged in a row over religious matters, the local county police said.

The argument turned heated and “hundreds of others” joined in, including a man who allegedly “stamped his feet on the Koran”, police said, citing eyewitnesses. Another witness said one refugee took the other’s Koran, which contained 200 euros hidden among the pages. Police spokesperson Erika Demeter said the refugees blocked the nearby highway, lit rubbish bins and threw stones at cars passing by.

Fully 154 police officers were sent to the site and police used tear gas to disperse the group. Nobody was hurt, Demeter said but one man was arrested in connection with the events. The camp has been sealed off temporarily and migrants are allowed only to enter the premises, the correspondent said. Police presence remains high by the camp, he added.