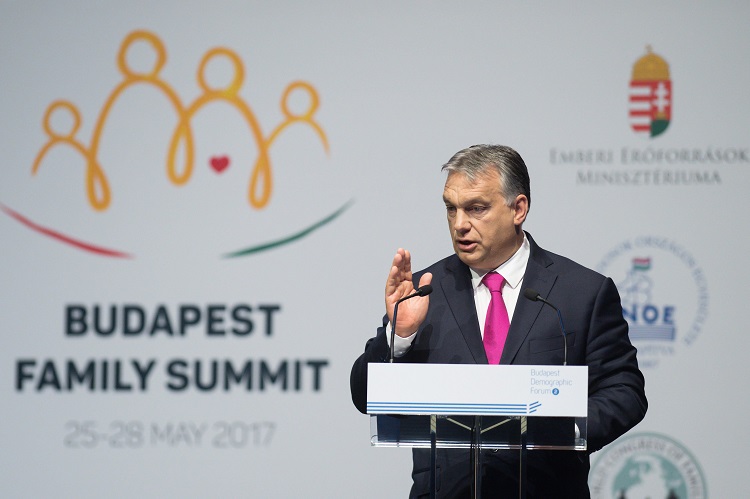 The Hungarian government will further increase family tax benefits, with two-child families being the focal point of the scheme, Prime Minister Viktor Orbán said in his opening address to the Budapest Demography Forum, which is held as part of the World Family Summit in the Hungarian capital on Tuesday.

Viktor Orbán outlined an action plan designed to encourage couples to have children, saying that 2018 would be “the year of families”. He announced that the government would pay off 1 million forints (EUR 3,200) of families’ mortgages for every third and subsequent child they have.

As part of the scheme, the government will forgive half of the student loan debt of young women with two children and all of the student loan debt of those with three or more children, he said. Women with higher education degrees who receive child support benefits will be eligible for them for an extra year, up until their child’s second birthday. He said the government would launch a “never-before-seen” creche development scheme which will see new creches built “in every area with families”, while existing creches will be renovated if necessary. Hungarians living abroad will also become eligible for maternity allowances next year and Hungarians everywhere in the Carpathian Basin will have the opportunity to acquire “baby bonds”, he said.

The Hungarian Premier announced that his government would set up a research centre with a view to aiding families, establishing a basis for “family policy philosophy” and understanding demographic conditions in Europe and around the world. The Prime Minister said Hungary would target raising its birth rate to 2.1 percent by 2030. “If there are children, there is a future,” Orbán said. He said Hungary’s population had declined by some one million people within less than 40 years, which he said was more than the losses the country had suffered in the second world war.

In his address Viktor Orbán also said that Europe was undergoing political and intellectual change, adding that its citizens had revolted and were forcing changes to migration policies. But Europe has only been given “a little time to take a breather” and “reshape its policies”, he said, adding that the most difficult times were yet to come for the continent. Orbán said Europe was “old, rich and weak”, while the part of the world from where “masses of people” had fled over the past few years was “young, poor and strong”. He said it was only a matter of time and political opportunity before these countries would “channel millions more people” to Europe.

On another subject, the Prime Minister said Hungary was fully committed to its support for the UK, adding that Hungary would do its utmost to make sure Europe’s future was secure. He said there were “countless” Europeans wondering how many terrorist attacks similar to the ones seen in Paris, Brussels, Berlin and Manchester seen over the past two years needed to occur in order for Europe to commit to protecting itself. Hungary will bolster the protection of its southern borders and will not let in anyone of whom there is the slightest suspicion “that they intend to attack our families or children”, Orbán said.

Lawmakers of the opposition LMP and Együtt parties criticized the government’s family support concept as being “narrow-minded” and targeted in funding. With its family support policy aimed at giving “ideological education” to society, the government ignores reality, a co-leader of LMP told a press conference. The Budapest summit will champion the traditional family model, which is represented today by merely 39 percent of Hungarian families, Bernadett Szél said. Single-parent families, accounting for 20 percent of all, are in the biggest trouble, she said, calling for differentiated rises in across-the-board family allowances.

Együtt (Together) party lawmaker Zsuzsanna Szelényi slammed the government’s family concept as “narrow-minded, mistaken and failing to consider women an integral part of society”. She urged the government to introduce a child-care benefit scheme for fathers and ratify the Istanbul Convention on preventing domestic violence. Former Socialist, currently independent lawmaker Márta Demeter also called for the ratification of the Istanbul Convention. She said the Budapest summit would reflect an “ultra conservative” family concept which goes against the European trend and forces a “peripheral, fundamentalist approach” onto Hungarian society.

Hungary’s future lies in strong families which constitute a cornerstone of society, a lawmaker of the ruling Fidesz-allied Christian Democrats said, hailing the international family summit held in Budapest. Europe is at a crucial crossroads to choose between the cultures of “life and death”, István Hollik told a press conference, stating support by the ruling parties for families and children. Hollik criticised the Hungarian left for supporting policies that aim to resolve the demographic crisis through migration, and that weaken families and nations. He also criticised Hungary’s previous left-wing governments for scrapping tax benefits for families and burdening them with austerity packages and tax increases.