“We could create a far more liveable life for ourselves (even) within the European Union if we could capitalise on nation states’ the cultural and other diversity through getting to know with other and the acceptance and tolerance stemming from that”, Hungarian photographer Zsolt Reviczky said in explanation for shooting his photo series Urban Worlds, which is exhibited in Berlin until 18 January.

How did the two months you spent in Berlin with a Moholy-Nagy scholarship go? When exactly were you there?
I was in Berlin between 15 May and 15 July. Applying for the scholarship requires a complete plan; to put it very simply, I wanted to shoot pictures on the well-working and not-so-well-working phenomena on Berlin’s multicultural scene. Although I had contacts and helpers abroad, I began to panic after two weeks because I failed to find a path into less open multicultural community. For this reason, I was forced to search for events relevant to the subject and find expressive moments at festivals and other locations. This meant that the two months were rather intense and full of work.

You also exhibited at the European Month of photography, held in Berlin. Visitors can now take a look at the photographs taken during the time you spent there. How were the pictures received?
Reactions so far have been very positive, the exhibition appeals to the German public. I wanted to create an unusual installational form to match the subject, so I asked Berlin street artist Johannes Mundiger to create a visually appropriate background for the pictures with gray-shaded grafittis in Collegium Hungaricum Berlin’s smaller gallery, then I just stuck the pictures on the wall. The result is that people entering are welcomed by a quintessential Berlin street atmosphere.

Why did you choose the bright and dark side of coexistence as your subject and why exactly did you immortalise the reality of Berlin and its surroundings?
The subject has been on my mind for a long time. We could create a far more liveable life for ourselves (even) within the European Union if we could capitalise on nation states’ the cultural and other diversity through getting to know with other and the acceptance and tolerance stemming from that. However, the current situation nevertheless shows that despite being very important for me, this is just a utopia. The Berlin environment was very exciting because it is one of the most tolerant societies within Europe and problems are abundant even here.

What is the next project you’re thinking about?
My next project is also connected to the subject – I’m shooting a series of the Roma football team of a small village in Nógrád county, Hungary. 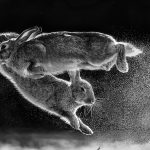