Botond Roska, a Hungarian neurobiologist researching in Switzerland, will receive the Körber Foundation’s prestigious award, the Körber European Science Prize, which recognizes a single European scientist each year, alternating between life sciences and physical sciences. The Hungarian physician, “one of the world’s leading experts in the study of vision and the retina”, is to be awarded for his work that “revolutionised ophthalmology.”

According to the website of the Körber Foundation, the Hungarian neurobiologist Botond Roska has set himself the goal of restoring sight to the blind. Roska and his research group in Switzerland investigate how various cell types in the visual system extract visual information from the environment. Based on molecular mechanisms, they have designed novel gene therapies for restoring vision in genetic forms of blindness. The scientist has carried out pioneering work to identify approximately one hundred different cell types in the retina and their complex interplay in signal processing.

The Körber European Science Prize honors outstanding and excellent scientists working in Europe. The prize is awarded to research projects that show great potential for possible application and international impact. In the last ten years alone, the Körber Prize winners included six scientists who were later awarded the Nobel Prize.

Roska is now working on making these fundamental insights beneficial for patients and using gene therapies to alleviate or cure their diseases. A  genuine breakthrough was achieved by reprogramming a cell type in the eye, enabling it to take over the function of defective light receptor cells. He was thus able to make blind retinas light-sensitive again – and clinical trials with blind people have already begun.

In 2019, Roska was awarded the Louis-Jeantet Prize for Medicine for the discovery of basic principles of visual information processing and the development of therapeutic strategies, such as gene therapy, to restore vision in retinal disorders. He is also the first Hungarian to earn the Bressler Prize for his vision-restoring therapy, and the Alden Spencer Prize for understanding the vision process.

Later last year, President János Áder decorated the neurobiologist with the Hungarian Saint Stephen Order on August 20th, Hungary’s national holiday. Áder referred to Roska as a “doctor who does not treat patients but enables others to heal through his research.”

The father of the world-renowned researcher was electrical engineer Tamás Roska, founder of the research of neural networks in Hungary. Botond Roska, although first studying cello at the Liszt Ferenc Academy of Music in Budapest, had to give up his music career because of an injury. He later received his medical degree from Semmelweis University, a PhD in neurobiology from the University of California, Berkeley, and studied genetics and virology at Harvard University. Roska currently works in Basel, Switzerland as co-director of the Institute of Ophthalmology Basel (IOB).

The Körber European Science Prize 2020 will be presented to Roska on 7 September in the Great Festival Hall of Hamburg City Hall. 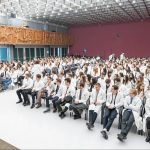