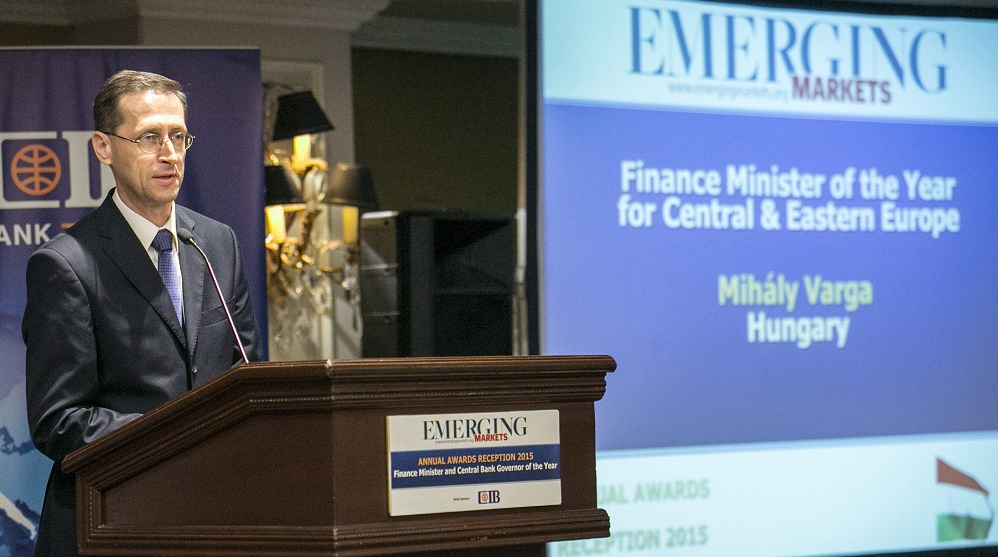 Hungary’s economy minister Mihály Varga has received the award “Finance Minister of the Year, Central and Eastern Europe 2015” from financial periodical Euromoney. Emerging Markets magazine, published by London-based Euromoney, said the award is an acknowledgement of the Hungarian governmentʼs perfect timing of the forint conversion of foreign currency mortgages, particularly regarding the Swiss central bankʼs decision in January, when the Swiss franc exchange rate suddenly rose substantially, as well as of Hungaryʼs early repayment of its loan to the International Monetary Fund in 2013. “London analysts, whom we refer to ever so often, have this time acknowledged the achievements of the Hungarian economy in the past five and a half years,” Varga said.

“This is the success of Hungary and the Hungarian economic policy”, Mihály Varga said on receiving the prestigious award presented at the Annual Meetings of the IMF and the World Bank in Lima, Peru. “I consider this award as one I have deserved together with the Hungarian people, the country’s economic stakeholders, as the outstanding results of the whole country have been recognized. “It has been the result of joint efforts that the Hungarian economy has over the past five years managed not only to overcome the crisis but also to enter a steady growth path”. he added. Hungary’ economy minister highlighted the fact that the country’s economic growth reached 3.6 percent in 2014. He also called it an important achievement that the number of people in employment has recently risen to a level which has been unprecedented in the 25 years of democratic rule in Hungary.

Even a long-time critic of the ruling Hungarian government’s economic policy, Mihály Patai has expressed his congratilations to economy minister Mihály Varga, admitting that the award is an important recognition for the entire country. According to Mihály Patai, head of the Hungarian Banking Association, the conversion of Swiss franc mortgages played vital role in Euromoney’s decision to honour the Hungarian minister. “The award exemplifies that the world appreciates if we [Hungarian government, National Bank, Banking Association] negotiate and cooperate with each other on significant financial and economic matters”, Patai insisted. The Banking Association has always been ready to find consensus, and it will not change in the future either”, he added.