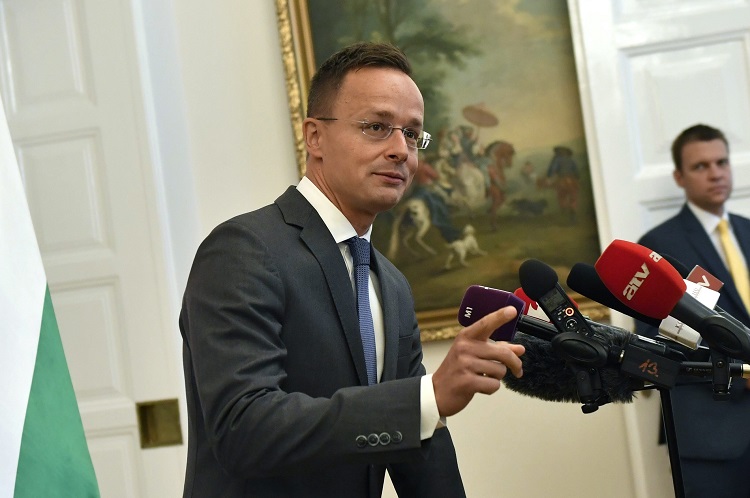 Hungary’s efforts to protect the EU’s external borders fall under the heading of solidarity, and failure to acknowledge this abnegates the true essence of solidarity in the situation facing Europe today, the Hungarian Foreign Minister said at a press conference on Monday. Péter Szijjártó also spoke about other hot issues, including Geman Chancellor Angela Merkel’s recent remarks on Hungary, Hungarian parties’ campaign activity in Romania and the threat North Korea poses to the World. 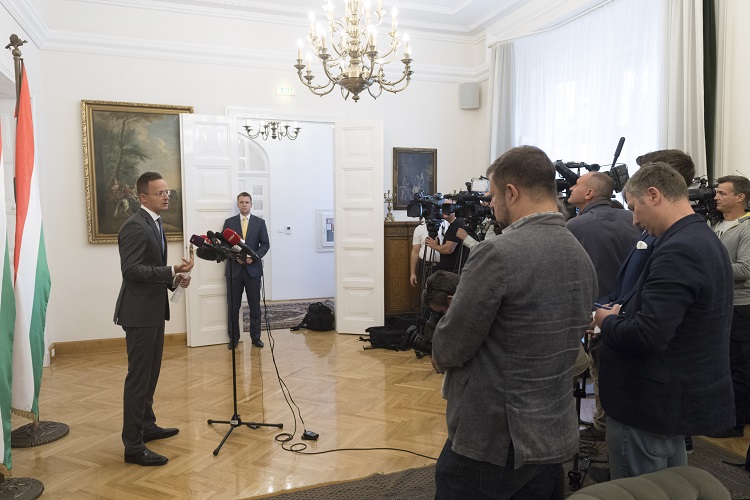 Hungary’s efforts to protect the EU’s external borders fall under the heading of solidarity, and failure to acknowledge this abnegates the true essence of solidarity in the situation facing Europe today, the foreign minister said. Hungary protects its borders not only for the sake of its own security but because it is an obligation which stems from its membership of the EU and Schengen zone, Péter Szijjártó said. The only way to stop a migrant wave of over 10,000 daily illegal entrants is by physically protecting the borders, he told reporters. Hungary’s fence along its border with Serbia is the “heart” of its border protection scheme, he added.

Szijjártó noted that the total cost of Hungary’s border protection measures since the start of the migrant crisis amounted to over 800 million euros, he said, arguing that Hungary was right to expect the EU to reimburse some of these costs. PM Viktor Orbán has asked the European Commission to reimburse Hungary for half of its spending on border protection. Security and solidarity “must go hand in hand”, Szijjártó insisted. He called the EU’s migrant quota scheme “nonsense”, arguing that the idea that a country should exacerbate a situation on its own territory that undermined its security to begin with-all in the name of solidarity-was also “nonsensical”.

Responding to the German chancellor, who said in a recent election debate that Hungary’s premier had failed to show solidarity by refusing to help refugees in 2015, Péter Szijjártó countered that PM Viktor Orbán had ordered the Hungarian authorities to uphold Schengen rules in all circumstances.

Referring to the wave of migrants that set off from Budapest on foot in September 2015, Angela Merkel said in Sunday’s debate with Martin Schulz, her Social Democrat rival: “Orbán took away the tickets from the refugees in Budapest and did not let the trains leave”. She added that behind her decision to accept the migrants was the fear that “Hungary won’t show solidarity in aiding the refugees”. Szijjártó said in response that  “train tickets do not override European law,” and only those with valid travel documents had been allowed to leave Hungary westwards. He said the only exceptions were when the Austrian or German chancellors “expressed a different view on the issue … Their reasons in doing so are their own affairs.”  Hungary is providing aid to illegal migrants defined under international law, the minister said, adding that in order to benefit, migrants would have to turn up at the “lawfully designated stations”.

Commenting on the fact that Hungary had become a topic of the German election debate, Szijjártó said called it an “honour” for the country and recognition that Germany was “finally aware of the efforts Hungary is making to fulfil its commitments to the bloc by protecting itself and Europe”.  Szijjártó said he expected Hungary to “be the subject of further discussions”, because the country intended to carry on fulfilling its commitments.

Asked about North Korea, the Hungarian Foreign Minister said the hermit kingdom presented one of the gravest threats facing the world today, saying that the US president and his administration were right to take it more seriously than in the past. Until now, the international community tended to underestimate the North Korean threat, but by now it has clearly become one that warrants the firmest international response, Szijjártó said.

Péter Szijjartó, who visited Bucharest on Romanian Foreign Minister Teodor Melescanu’s invitation last week, gave an interview to Romanian public television (TVR) on Monday afternoon. He said Romania had raised no objection to Hungarian parties campaigning in Romania in the run-up to the 2018 general election. Romania has also recognised dual citizenship and granted it to many ethnic Romanians beyond its borders, Szijjarto said. This is why Romania has never made “serious critical remarks” about Hungary granting fast-track citizenship to ethnic kin, he added.

The Hungarian Foreign Minister said he hoped that “Hungary’s political parties will be wise enough not to resort to methods that may expose the Hungarian ethnic community to attacks by extremist or nationalist forces. We will make every effort to avoid this, all the more so because, for historical reasons, 2018 will be a year of key importance for Romania”, Szijjartó said, referring to the centenary of the union of Transylvania and Romania.