Since Johann Herder, Hungarians have been frightened of ‘national death’. In his diary, the 18th century German philosopher predicted that the Hungarian language, and with it the Hungarian nation, would disappear and become assimilated by surrounding Slavic peoples; this prophecy caused considerable uproar in Hungary, and has shaped the country’s self-image, and beliefs about its regional role, ever since. Fortunately, the prophecy hasn’t become true, and seems to be no longer a threat, simply because those other Slavic people around us are dying out as well; therefore, there is no place to become assimilated.

Nowadays we talk more and more about negative demographic trends in Eastern Europe. United Nation research shows that, of the top 10 countries in the world with the fastest shrinking populations, most are from the Eastern European region (Bulgaria, Latvia, Moldova, Ukraine, Croatia, Lithuania, Romania, Serbia, Poland and Hungary among them). These countries are estimated to see their populations shrink by more than 15% by 2050. This population loss is chiefly driven by main three factors: falling fertility rates, massive out-migration and relatively high mortality.

In Hungary, the “Hungarian exodus” of workers leaving the country has become the most popular political issue after the ongoing refugee-migrant crisis. The opposition has been trying to blame the government for the large number of (particularly young) people leaving the country, while Prime Minister Viktor Orbán casually dismissed these criticisms, claiming that those leaving the country are not being forced out of the country by economic forces, but are merely “adventurous” and beneficiaries of the economic freedom of the European Union.

But if we look into the net migration statistics, Hungary does not perform badly in comparison to its neighbors. The World Bank’s net migration data from 2012 shows that Romania has a net migration rate of -21.80, Serbia -13.89, Poland -0.46, Croatia 1.39, Slovakia 0.22 and Hungary 1.33.  This means, for example in the case of Romania, that 21.8% more people left the country over the course of a year than entered it. According to these statistics, at least, Hungary’s migration numbers seem much more favorable.

Another statistic which just came to light in the last year paints a more optimistic picture. A Czech mathematician collected UN data, and showed that Hungary has the lowest percentage of its population living abroad among European countries. For example, 11 % of Poland’s population now is living abroad, while for Romania this number is at 17%.

So, am I saying that emigration is not a Hungarian problem? No, but it seems that it is a smaller matter than we think, or at least it is a disadvantageous international trend which has impacted the country less severely than other countries in Eastern Europe. 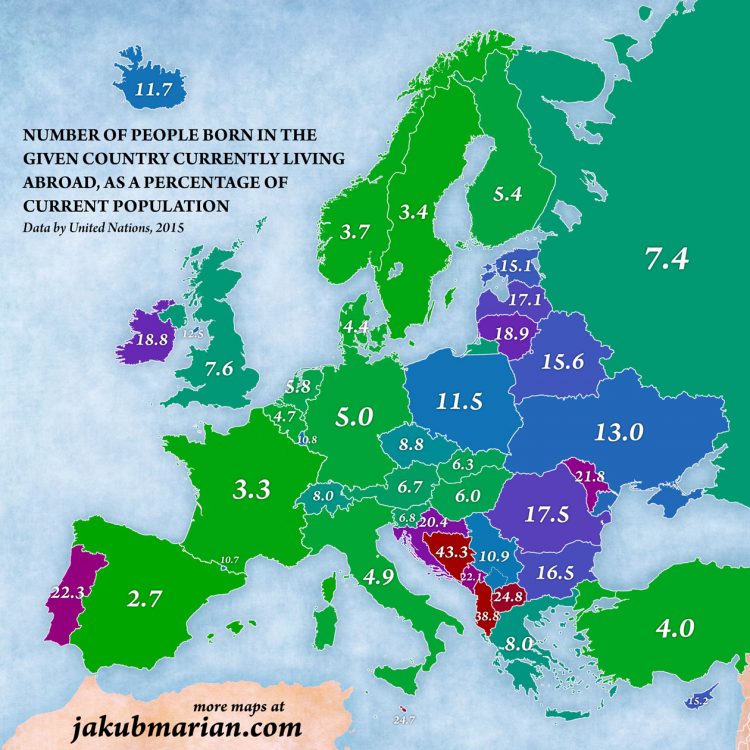 So then, why do people leave Hungary? In my opinion, the answer is easy: because they can earn more in other European countries. The Neoclassical economic theory of migration states that the main reason for labor migration is wage difference between two geographic locations. These wage differences are usually linked to geographic labor demand and supply. It can be said that areas with a shortage of labor but an excess of capital have a high relative wage while areas with a high labor supply and a dearth of capital have a low relative wage. Labor tends to flow from low-wage areas to high-wage areas. Often, with this flow of labor comes changes in the sending as well as the receiving country.

If we consider this model working, we can see that emigration could be the engine for economic equality in Europe. If our workforce surplus meets with Western Europe’s shortage, it will stop the wage growth in the West, but could make wages higher here in Eastern part of the Union. In some ways, the process has already begun. The estimates of the Trade Union of the United Kingdom show wages in all Eastern European (usually sending) countries are growing, but the traditional “big economies” (usually receiving countries) are at the bottom of the list. 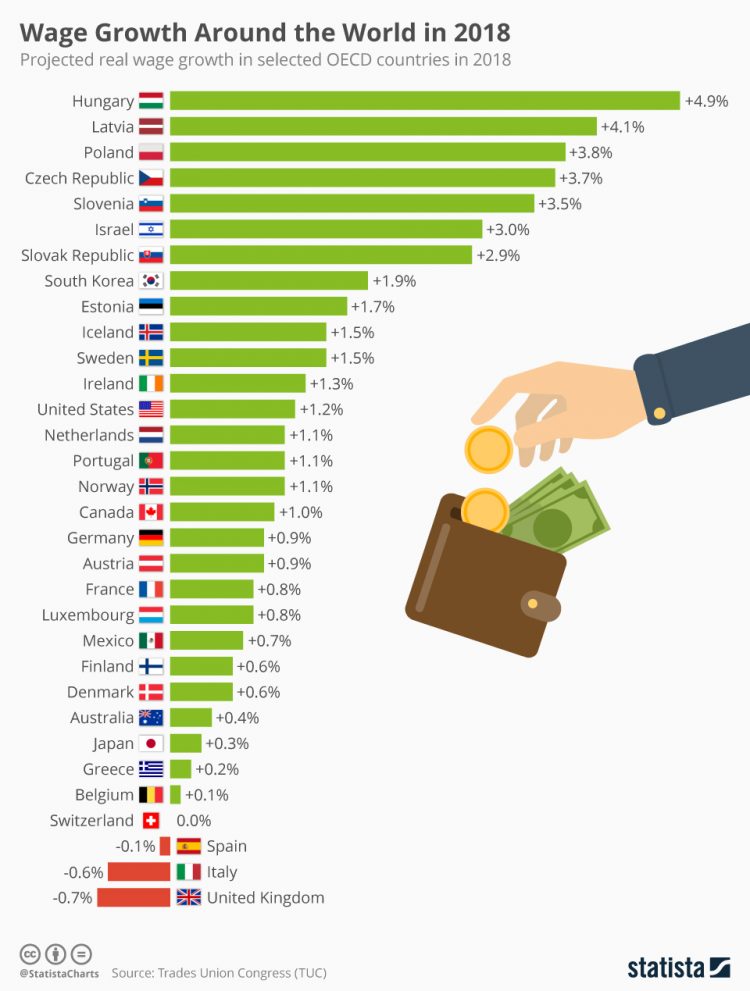 The gap between the two areas won’t disappear overnight due to the law of supply and demand, but it seems that now what might otherwise be a natural, long-term economic process is becoming increasingly politicized. Last year, opposition party Jobbik launched its “Wage Union” initiative, calling for “equal pay for equal work” across the EU. While the plan’s advocates argue that this could be a way to successfully equalize wages between the western and eastern halves of the bloc, critics, as well as the Orbán government, have argued that the plan is essentially impossible to implement, as Hungarian companies lack the funds to pay, low-skill workers as much as companies in Western Europe do, while multinationals who opened large offices in Budapest (and who represent a significant chunk of the Hungarian GDP as a whole) due to the country’s low wages, would likely move their businesses elsewhere.

In any case, income inequality between European countries should decrease in the years to come, meaning that one of the main causes of inter-European migration would decrease as well. We already have a few professions in which higher Western wages don’t give enough motivation for leaving. For instance, in the field of programming, professionals don’t earn much more in Western Europe, especially when one factors in a higher cost of living. In addition, programmers can often be hired by Western companies while working in their home countries.

If Hungarian wages consolidate, the negative decline of the population could also be viewed in a better light. Despite current fears, Eastern Europe as a whole, and Hungary in particular, will not just die out as has been worried about for centuries. In the medium-term, the worst case scenario is that our population shrunk to 8.5 million by 2050, but is this really a disaster? Switzerland now has 8.3 million people. In which country would you rather live: a prosperous, wealthy, and functioning country with a population of 8.3 million, or in a relatively functioning country which has 10 million, but is whining about its passing? 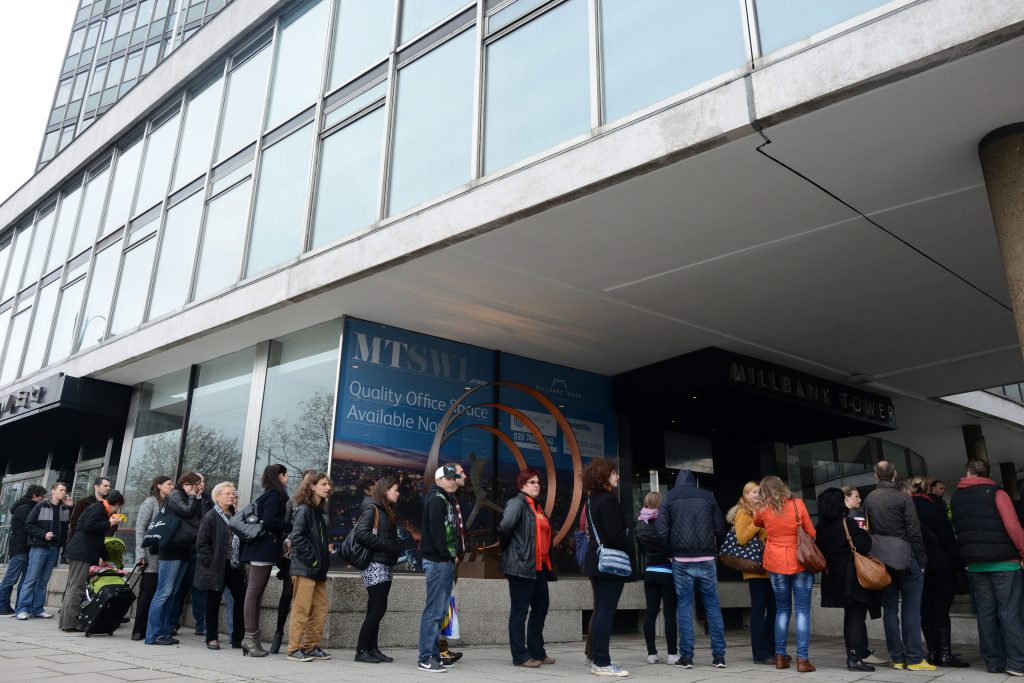 Only 65,716 Hungarians living outside of Hungary but with a Hungarian residency registered to cast their ballots at embassies for the upcoming elections, while their total number may be as high as around 4-500,000. Due to unsettled voting difficulties, they often have to travel and wait long hours in order to vote, which, as a […]
Hungary Today 2022.04.02. 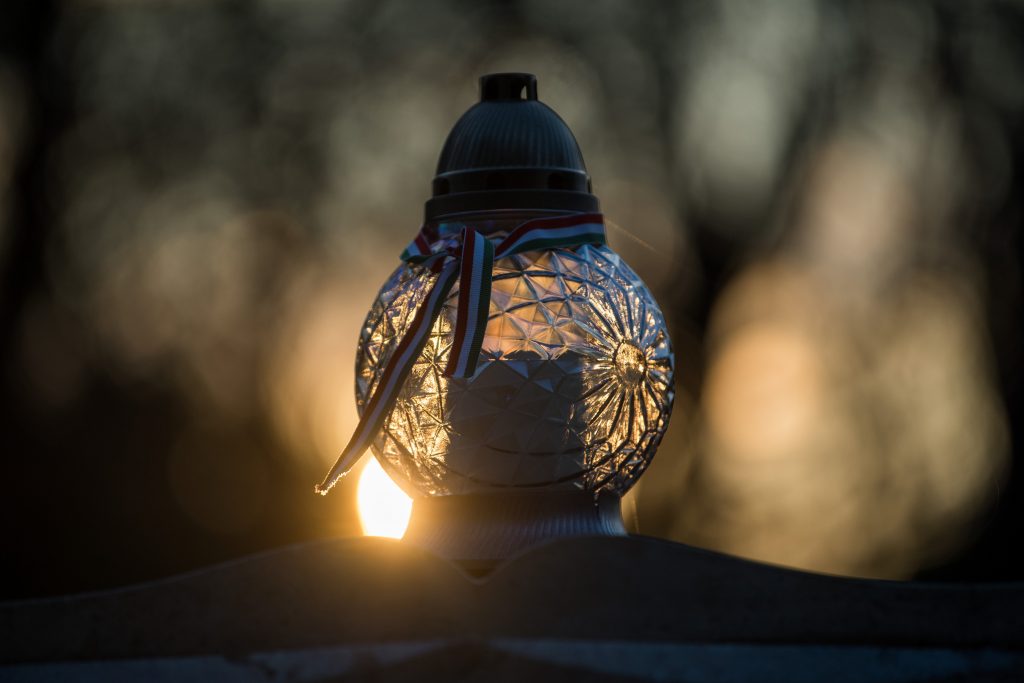 Preliminary data show that 6,602 children were born and 12,957 people died in January, with the number of live births falling by 10 percent compared with January last year, while deaths decreased by 6 percent, the Central Statistical Office (KSH) said on Monday. As the number of deaths fell more than that of births, natural […]
MTI-Hungary Today 2022.03.01.