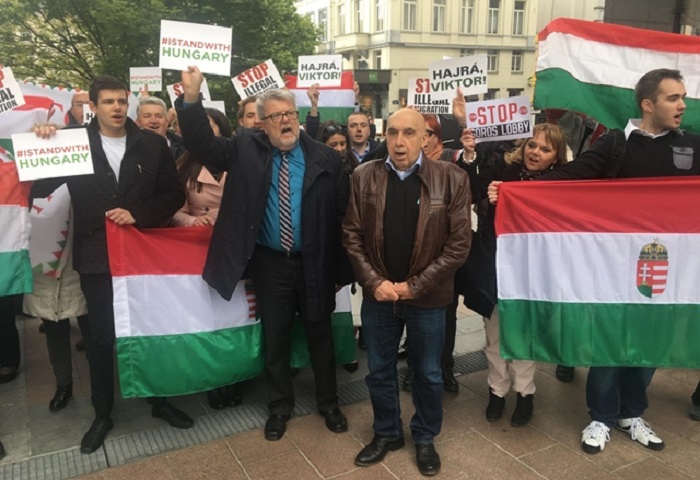 A small group of pro-Orbán protesters appeared outside the European Parliament in Brussels Wednesday as Prime Minister Viktor Orbán participated in an EP debate on “the situation in Hungary.” The protesters, holding flags bearing the insignia of the Fidesz-funded civil organization Civil Unity Forum (CÖF), stood opposite an anti-Orbán demonstration by alumni and sympathizers of the embattled Central European University.

The pro-Orbán protest was headed by CÖF founder and spokesman László Csizmadia, who told Hungarian state media at the scene that the demonstration represented the interests of the Hungarian majority, which doesn’t want “a usurer” to dictate Hungarian internal affairs from outside. (Csizmadia was presumably referring to the European Union.)

Csizmadia expressed his dismay that Hungary has fallen under such attacks for its decisive actions in protecting the European Union against “economic immigrants and the terrorists arriving among them.” He also blamed Hungarian-born American billionaire and Central European University founder George Soros for conspiring with civil and charitable organizations to harm Hungary and import migrants into Europe.

“Sometimes those forces get stronger against Hungary which can’t tolerate that the V4 [Visegrád Four] countries, the old socialist countries, more strongly insist on their freedom than those Western countries that have lived a good life,” Csizmadia said.

Hvg.hu also reported that Csizmadia and a reporter for the pro-government website Pesti Srácok arrived in Brussels by plane, an irony in light of pro-government media accusations that massive demonstrations in Budapest in recent weeks had been organized by Soros and included demonstrators flown in by the billionaire. Socialist MEP István Újhelyi called on CÖF to divulge who financed its protest trip to Brussels.

The Hungarian Civil Liberties Union (TASZ) released a statement Wednesday afternoon declaring its solidarity with CÖF, asserting that a protest cannot be disbursed based solely on lack of a permit.

“The disbursal of peaceful events because of a lack of an application is contrary to the European Convention on Human Rights,” TASZ wrote in defense of CÖF on its Facebook page.

TASZ is one of the civil organizations that receives funding from Soros’ Open Society Foundation and thus has been specifically targeted by the Orbán government and its proposed law on non-governmental organisations. Orbán defended his government’s crackdowns on NGOs at Wednesday’s plenary session in Brussels.