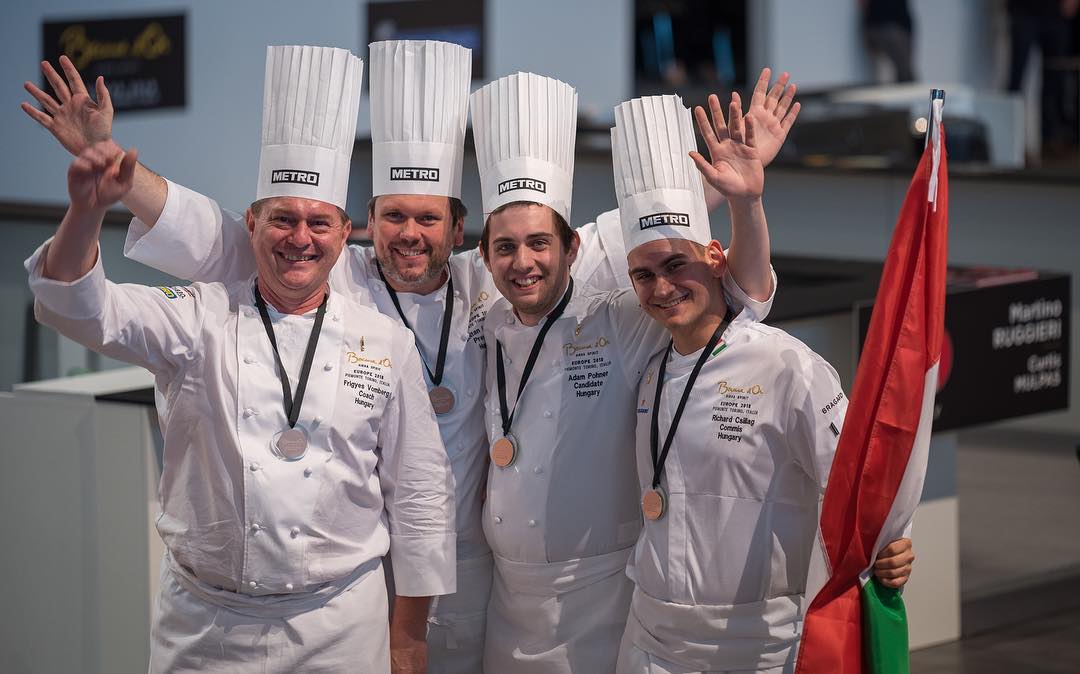 Earlier this week, a team of Hungarian chefs took part in Bocuse d’Or Europe, a two-day championship to determine which European countries would make it into the finals of a contest that has been described as the “Olympics of the Cooking World.” 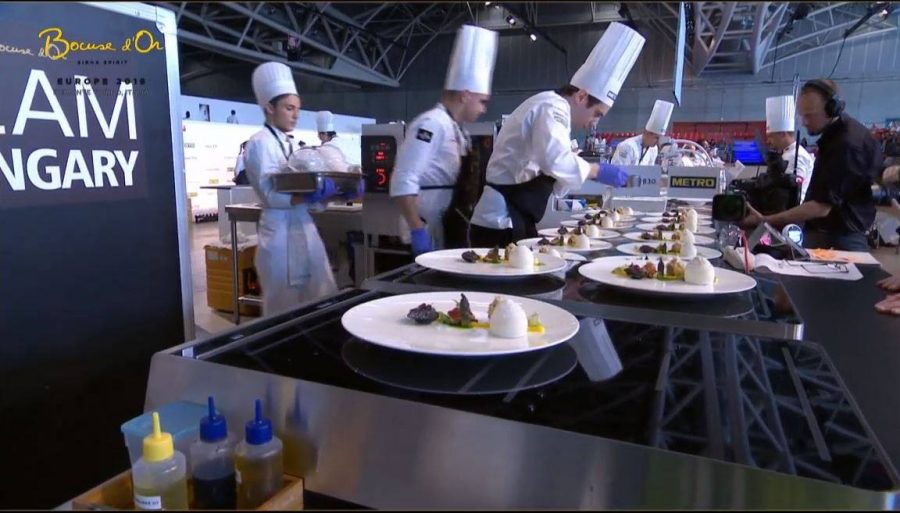 This year, the European stage of the tournament was held in the northern Italian city of Piedmont, where for two days Hungary was represented by Ádám Pohner, the 24-year-old chef who earlier this year won the Hungarian Bocuse d’Or.

With his win, Pohner, who is currently the sous-chef at the popular Balaton restaurant Kistücsök, earned the right to represent his country in this year’s Bocuse d’Or competition. And represent it he did: with the help of commis chef Richárd Csillag and the advice of coach Frigyes Vomberg, Team Hungary finished in eighth-place finish, keeping the country’s hopes for a cooking crown alive and well. 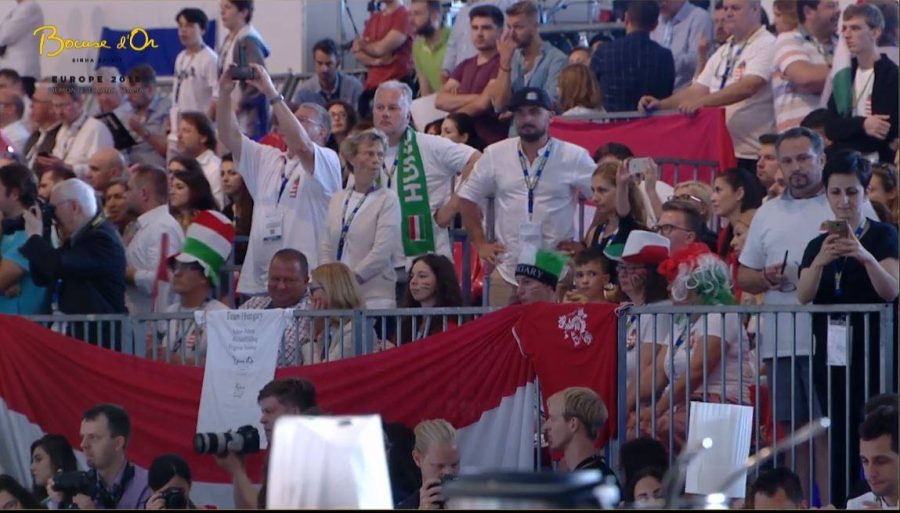 Hungarian fans at the European Bocuse d’Or in Torino

At this year’s European tournament, which is a preliminary for 2019’s world Bocuse d’Or, Scandinavia dominated. Norway’s team, led by Christian André Pettersen, took home the gold medal, while the Swedes won second place, and Denmark clinched the bronze. In addition, while team Italy’s performance earned it a “wild card”, which means that the hosts of the European tournament will be taking part in next year’s Finale, despite the fact that they did not make it into the top ten.

While it failed to repeat Tamás Széll’s 2016 championship performance, with its 8th place finish in the European tournament, Team Hungary is guaranteed a slot at next year’s world Bocuse d’Or competition, which is always held in Lyon, France. In addition to this year’s winners, the other European teams to advance to the final are Finland, France, Belgium, Switzerland, Iceland, and the United Kingdom.

At this year’s European contest, Pohner and his colleagues had to incorporate a number of compulsory ingredients that reflected the culinary culture of the tournament’s Italian hosts into their two dishes, which were the following: 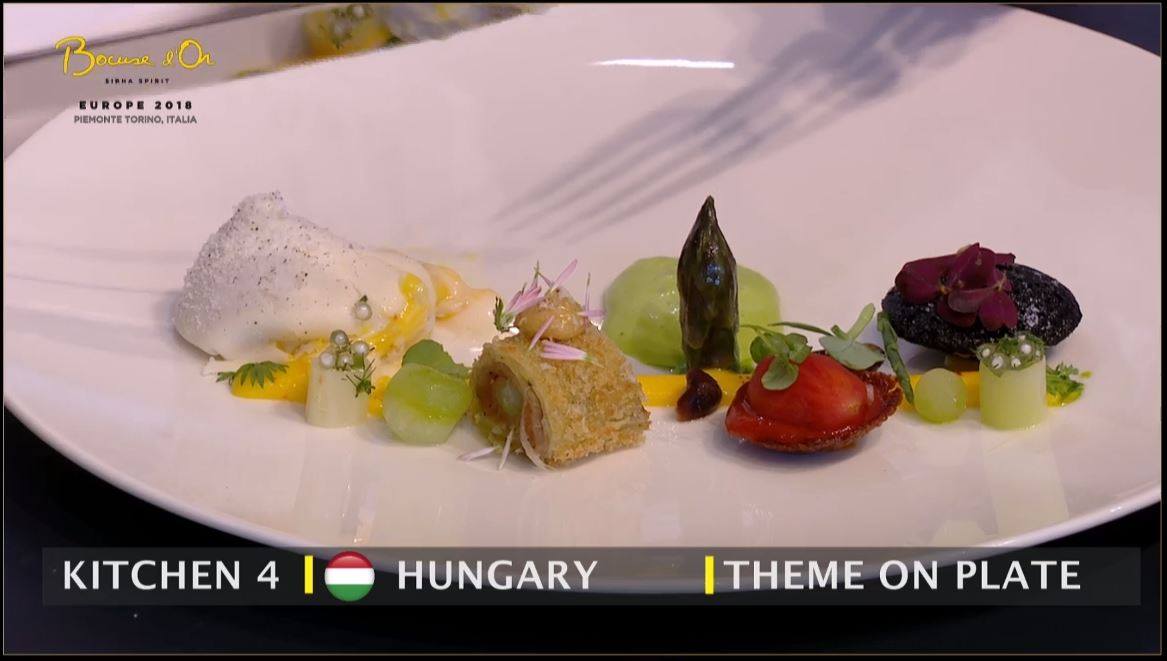 As he was the winner of 2016’s European Bocuse d’Or championship, Hungarian chef Tamás Széll served as the (non-voting) honorary president of the jury.

According to the contest’s own website, the Bocuse d’Or is a “revolutionary gastronomy contest” which brings together

24 young chefs from all over the world, among the most promising talents of their generation, and have them prepare superb dishes within 5 hours 35 minutes, live before an enthusiastic audience.