Milorad Krstić’s animated heist thriller Ruben Brandt, Collector is among 25 animated feature submissions competing for one of the five Oscar nominations at the 91st Academy Awards Ceremony next year.

The English-language film written and directed by Milorad Krstić centers on Ruben Brandt, a famous psychotherapist, who is forced to steal 13 paintings from world-renowned art galleries and private art collections in order to stop his terrible nightmares from continuing. He, his gang of thieves and four patients strike with great success the Louvre, Tate, Uffizi, Hermitage and the MoMA.

Brandt becomes known as “The Collector,” one of the world’s most-wanted criminals. Gangsters and headhunters chase him around the world while the reward for his capture continues to rise, approaching $100 million. A cartel of insurance companies entrusts Mike Kowalski, a private detective and leading art-theft expert, with solving the case.

Other shortlisted films competing for the Oscar nomination include Dr. Seuss’ The Grinch, Hotel Transylvania 3, Isle of Dogs and Incredibles 2.

Several of the films have not yet had their required Los Angeles qualifying run. Submitted features must fulfill the theatrical release requirements and comply with all of the category’s other qualifying rules before they can advance in the voting process. 16 or more films must qualify for the maximum of five nominees to be voted on in the category.

Sony Pictures Classics has picked up the North American and Latin American distribution rights to the Hungarian film which is set to be released with an Oscar-qualifying run in 2019. The film was produced by Péter Miskolczi, Radmila Roczkov, Hermina Roczkov, János Kurdy-Fehér and Krstić with the support of the Hungarian National Film Fund. Mozinet will release the film in Hungary in November.

Films submitted to the Animated Feature Film category also qualify for Academy Awards in other categories, including Best Picture. Nominations for the 91st Academy Awards will be announced on Tuesday, January 22, 2019. The 91st Oscars will be held on Sunday, February 24, 2019 at the Dolby Theater, Los Angeles. 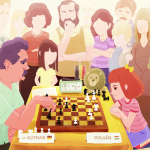