First, a kilometres-long human chain was formed, then the Sunday demonstration of around ten thousand gathered in front of the Parliament to protest the government-pushed new form of operation of the University of Theatre and Film Arts (SZFE). Positions, however, didn’t converge and SZFE’s main building is still under blockade, while Attila Vidnyánszky and the government upholds their stances and want to kick-off the school year.

The human chain was formed starting from the university building in Vas Street, proceeding by ELTE and Corvinus Universities, past the headquarters of the Hungarian Academy of Sciences (MTA) and along the embankment to the Parliament. Many personalities from the theatrical world could be spotted in the human chain, as well as the mayor of Budapest. Another chain was formed in front of Kossuth Square with the protesters holding the same kind of red and white plastic tape that was wrapped around the SZFE building, which is becoming a symbol of the events, similarly to one of the demonstrators’ chants (first used at the CEU demonstrations):

Media reports number several thousand participants. The rally, having gone without any disturbance, eventually ended at around 7 o’clock. 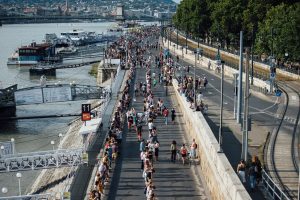 The human chain on the embankment. Image by SZFE HÖK Facebook

At the university’s Szentkirályi Street building, László Upor, the university’s outgoing vice-rector, noted that he had agreed with students occupying the university building to postpone Monday’s opening by a week. He also warned that the academic year could not start unless the Innovation Ministry addressed “the unsustainable situation”.

Demands: Senate’s power must be restored

On the occasion of the demonstration, their demands have been made public too. Briefly, they reject the law on model change in its current form, they reject the new Board of Trustees and Supervisory Board, and they reject the way in which the latter two boards had been appointed.

As long as their requirements are not met, they maintain the blockade and promise further demonstrations.

Meanwhile, a growing number of cultural personalities, Hungarians and foreigners alike stand for SZFE’s freedom (you can find liberal 444.hu’s list here.) At least five Hungarian artists protested at the Venice Film Festival, including Lili Horváth and Kornél Mundruczó. The famed director along with his partners wore ‘Free SZFE!” t-shirts, reportedly both on the red carpet and the press conference additionally explaining the happenings to the international press.

While lately, world-class British writer Salman Rushdie, has become perhaps the most famous international personality to stand with SZFE. In addition, Berliner Ensemble, a company established by Bertold Brecht himself, even took action and cancelled their participation at the MITEM theatrical festival in protest against the government’s move (MITEM’s art director is Vidnyánszky and it is held in the National Theater, led by him). 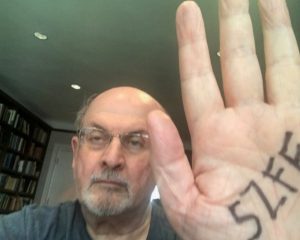 PMO Chief and Supervisory board wants to start school year

In response to Upor’s announcement about the postponement, the supervisory board (led by Vidnyányszky) said that it hadn’t been notified by the university leaders of the postponement and “disagrees with the decision.”

In addition, the PMO Chief aired that they aimed to start teaching, contrary to the blockade of the building, and confirmed that they would not step back from their position. Gergely Gulyás, the first government politician to make a public statement, repeated the government’s stance that confirms the move with efficacy and modernization. He claimed that with the move, the state’s supervision ended. Perhaps this is what the demonstrators wanted returned to the university.

In Gulyás’ view, however, there are students who want to study, and for them an alternative place would be provided. This area is something that would be resolved by the [new] board of trustees, who are also responsible for choosing the university’s teachers and leaders.

In the latest development, 58 scientists, including right-wing and conservative ones such as former foreign minister Géza Jeszenszky, philosopher András Lányi and former MTA president and educational minister in the first Orbán government, József Pálinkás issued a critical statement.

Their communique says “Enough of the destructive and troublesome measures enacted by the government!”. In their view, these measures “privatized the nation’s wealth; made media independence impossible; censored scientific research; turned state administration into a puppet theatre; and trampled on educational freedom while public education had long been ground up. It is now the universities’ turn”. They also call intellectuals “to stand up for the university’s autonomy, freedom of education and freedom of research.”