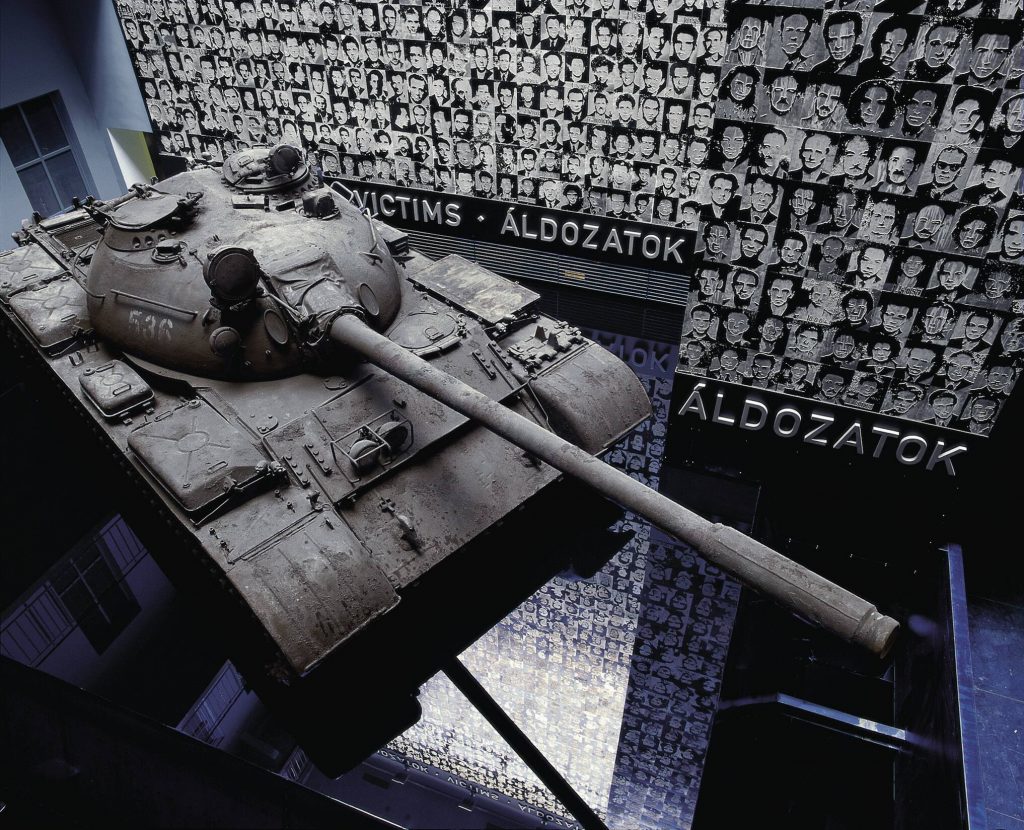 This week, the Friends of Hungary Foundation, publisher of Hungary Today, hosted a three-day conference entitled “Hungary At First ‘Site’” for foreign journalists to get a better understanding of the Hungarian government’s decisions and the Hungarian way of thinking. On Wednesday morning, a few days prior to the national holiday commemorating Hungary’s 1956 revolution and fight for independence, the journalists paid a visit to the House of Terror Museum to learn more about 20th-century Hungary.

The journalists agreed that the museum serves an important function of allowing those who didn’t live in the era to experience what it was like. The museum helps history come to life, and they all encouraged the idea of schools bringing students and educating them about the frightening reality of the 20th century in Hungary. The House of Terror is like a haunted house filled with video screens, nooses, tanks, photos of those who were tortured there and a labyrinth made out of wax pig fat bricks. It was designed by Attila Kovács, a movie designer who worked on István Szabó’s Oscar-winning Mephisto.

Some of the journalists, mostly those from the US, didn’t know much about the communist regime and asked further questions about the process of joining the party and how life was for those forced to join. The journalists also inquired about some of the key figures of the 20th century, such as Miklós Horthy, Rákosi or Kádár. They were most fascinated by the life and show trial of Cardinal József Mindszenty. Mindszenty spent 15 years at the US Embassy to avoid a lifelong prison sentence. The most shocking for all was seeing the prison cells underneath the building. Afterall, the people who were held captive were tortured there.

However, some of the journalists implied that focusing on two different totalitarian regimes in one museum can be confusing for first-time visitors with very little knowledge. Despite being almost 2 hours long with very detailed guided tours, it was often hard to follow. Some also argued that there was too much noise or music in some of the rooms, such as in the room where a ‘black car’ (the type that secret police officers used to pick up their victims during the night) is on display. However, this doesn’t take away from the many unique sights in the modern museum which help visitors ‘travel back in time.’

House of Terror Museum opened in 2002 to commemorate those who were held captive, interrogated, tortured and killed in the building of 60 Andrássy Street, Budapest–the very same building that houses the museum today. During the Second World War reign of the fascist Arrow Cross regime, as well as throughout the Communist era, the building served as the headquarters of the secret police. The museum–the only one of its kind–contains exhibits related to both the fascist and communist regimes of Hungary and presents the horrors of the building in a tangible way, all while commemorating the victims of the 20th century. The Director-General of the museum is historian Dr. Mária Schmidt who opened the second day of the Hungary at first ‘Site’ conference with a presentation on the subject ‘Hungary in National Perspective.’

The conference, held between the 15th and 17th of October, welcomed participants from various well-known media outlets around the world, including The American Conservative, Frankfurter Allgemeine Zeitung, Fox News Channel, National Review and Kristeligt Dagblad (Denmark).