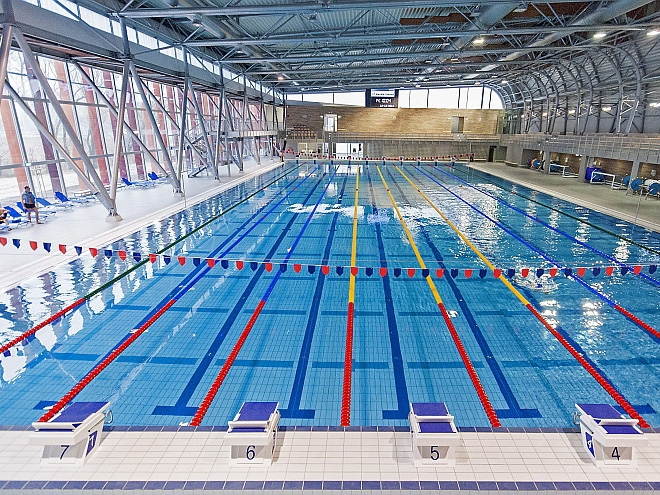 A new swimming pool in the western city of Győr was handed over to the public on Saturday. The swimming complex, named Aqua Sports Arena, is to host a World League match of the Hungarian women’s water polo team in January.

Hungarian Olympic Committe (MOB) chairman Zsolt Borkai, who is also Győr’s Fidesz major, said in his speech that the city’s inhabitants achieved a remarkable performance together with the government and the city leadership and the construction of a fifty-metre swimming pool in town is a dream come true for many natives of the city. The chairman of the Hungarian Olympic Committee expressed his hopes that the swimming pool will be a “good environment” not only for professional athletes but also for young townsfolk.

Csaba Simon, executive director of Győr Projekt Kft., the company in charge of construction, told the state news agency MTI that the swimming complex, which boasts a total surface of approximately 10 000 square metres, hosts a 50×25 metre full-size and a 10×16 metre educational pool. The centre has a capacity of welcoming 1200 guests at once.

The full-size pool has been awarded an international certificate and is fitted with an ozone technology water treatment system and an Omega timer system which complies with the standards of the Intrnational Swimming Federation. Adjacent to th pools are 33 single-person, four group and two trainer’s changing rooms.

Mr. Simon highlighted that as the construction of the swimming pool only amounted to part of the HUF 9.6 billion in development funds allocated to the city by the government, building works are to be continued next year. The next phase of contruction will see an open-air pool and areas suitable for organising athletical contests and tennis matches being built, as well as a football pitch.

At the inauguration ceremony, Hungary’s Olympic, World and European Champion swimmer Dániel Gyurta said in praise of the complex that the swimming pool is up to not only Hungarian but world standards.