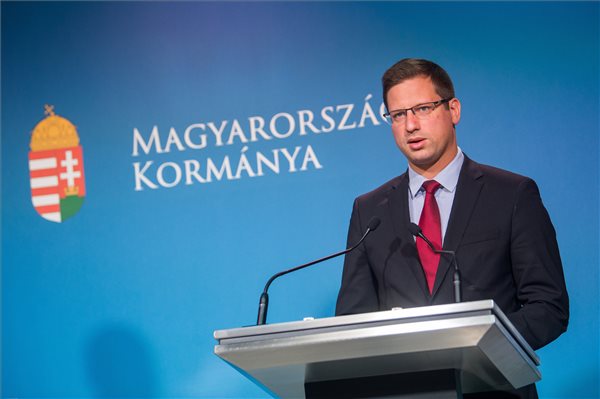 Ursula von der Leyen would not have been nominated for the post of European Commission president without support from the Hungarian government and the Visegrád countries and she “could not have been elected without the votes of (Hungary’s ruling) Fidesz MEPs,” the head of the Prime Minister’s Office said on Thursday.

Gergely Gulyás said that Fidesz’s 13 votes “had been mathematically needed” for Von der Leyen to win. He added that the EC has become “a lot more fragmented” than before and it is more difficult to obtain majority support.

“We have trust in the president-elect but that trust has been vested in advance,” he said, adding that the new commission would have to “fix many mistakes left behind by outgoing EC head Jean-Claude Juncker” such as the way the body handled the migration crisis. He also criticised the EC for delays in increasing the efficiency of border controls and its “failure to reimburse Hungary for its border control measures”. He also blamed the EC for uncertainties around Brexit.

Gulyás insisted that the EU’s spitzenkandidat system has failed, as “none of the top candidates were supported by a majority of EU heads of state and government” and the council’s candidate won the post in the end. Neither Frans Timmermans nor Manfred Weber have been elected, Gulyás said, adding that the commission is now “not headed by a person who attacked any members states before or someone who is made by his political past unsuitable to act as a coordinator or guardian of the EU treaties”.

Concerning the election of officials to commissions of the European Parliament, Gulyás said that “national interests must be promoted in international organisations, too”. He insisted that “if a politician is given a mandate by Hungarian voters, they must represent the Hungarian interest”. Fidesz would “observe the consensus” even if “we did not find a communist, liberal, or green candidate eligible”, he said.

Answering a question about remarks by Von der Leyen concerning her commitment to European values, Gulyás said that “we could fight together against those seeking to weaken Europe’s values” such as ethnic minority rights.

Concerning a call by a United Nations rapporteur that the Hungarian government should reconsider its decision to extend a state of crisis with regard to a migration pressure, Gulyás said that it was up to the interior ministry to come up with a proposal once the current crisis state term was over, which the government would consider. He added that the UN report “should be taken with reservations” because “the UN position on migration has been well-known”.