In the shadows of the immigration crisis, the ongoing military conflict in the Ukraine has claimed the life of yet another ethnic Hungarian conscript.

37-year-old Sándor Lőrinc disappeared on 25 January but his death has been confirmed by DNA analysis only in the past days, with his family hoping until now that he had been captured. The battle of Sanzharivka, in January, also claimed the life of Adalbert Kovács, another ethnic Hungarian from Transcarpathia, home to a 150 000-strong ethnic Hungarian minority.

Yesterday, hundreds of children, men, women and elderly people turned out, kneeling on the roadside in a display of respect to the fallen soldier as his body was returned to his home village of Fancsika (Ukrainian: Fanchikove), near the small town of Nagyszőlős (Vinogradiv), Ukraine.

His untimely death should point to the human tragedy that is ravaging Ukraine’s ethnic Hungarian community almost unnoticed as Hungary is struggling to cope with the immigration country – and raise the question of how many more Hungarians need to die in a war that is fought in the interests of everyone but their own. 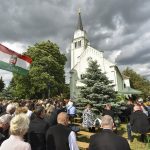