The opposition Democratic Coalition (DK) has announced that it would file a criminal complaint against the Hungarian prime minister for people smuggling and promotion of illegal border crossing.

DK deputy leader Csaba Molnár told a press conference on Friday that Viktor Orbán’s government “has been lying” about former Macedonian PM Nikola Gruevski’s fleeing to Hungary and pointed to Albanian press reports that Gruevski had left Albania in a car belonging to the Hungarian embassy in Tirana. “The government is not only hiding a convicted criminal but has helped him illegally cross the border,” Molnár insisted.

Molnár demanded that the government should disclose details of “smuggling the criminal into Hungary” and proposed that parliament should have the affair on its agenda next Monday.

Gruevski held office between 2006 and 2016. An arrest warrant was issued earlier this week after he failed to start a two-year prison sentence for corruption. He announced on his Facebook page on Tuesday that he was in Budapest and had asked the Hungarian authorities for political asylum.

Neither the Hungarian state nor Hungarian authorities provided any assistance to former Macedonian PM Nikola Gruevski to leave his country, the Prime Minister’s Office told MTI on Friday, in response to “allegations and fake news” in the media.

Gruevski indicated his intent to apply for asylum at a Hungarian diplomatic mission, and the Hungarian authorities decided that, for safety reasons, the application should be submitted and Gruevski interviewed in Budapest, the PM’s Office said in a statement. Relevant procedures will be conducted in line with Hungarian and international law, they added.

Gruevski is staying in Hungary legally, in line with asylum regulations, the statement said, adding that the authorities would not provide further information until the procedures are concluded. 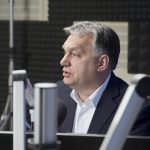 Coronavirus – Orbán: Vaccine Will Be Available in Hungary and ‘We’ll Be Free from This Misery’