The fighters were scrambled to identify the A321 aircraft en route from Antalya to London.

The Gripens identified the aircraft within a short while and escorted it out of Hungarian airspace to Austria, the ministry said. 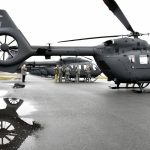