Grave Abuses at State-Run Home for People with Disabilities

Grave abuses may have occurred in a state-run home for people with disabilities located in southern Hungary, according to a government official on Wednesday.

He noted recent press reports concerning the Mozsgó residential institution as well as a report by Hungarian rights NGO TASZ dating back to the spring of 2018. In August last year, the ombudsman’s office also investigated on site and released its report early this April, he added.

The ombudsman’s report did not find evidence to support the complaint concerning living conditions, meals and health care at the institution, therefore he turned to Mozsgó’s director with a request for an internal investigation.

TASZ, however, withheld the documents and video footage pertaining to the allegations for eight months, Fülöp said.

In mid-April, the ministry filed a police complaint against an unidentified perpetrator and records from the ombudsman’s office were forwarded to the state secretary.

Fülöp said that considering the seriousness of the case, he ordered the immediate dismissal of the two employees and banned their further employment.

He said no further statements would be made until the police investigation had been fully completed.

The Mozsgó home has operated since 1960 and 57 employees provide care for 133 people with moderate to severe disabilities housed there.

On the featured photo: Attila Fülöp. Photo by MTI 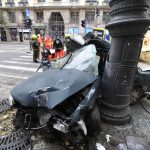