The agreement was initiated by the US and comes as an appreciation of the Hungarian government’s Hungary Helps programme aimed at strengthening Christian communities in the Middle East, he said, calling it “a huge diplomatic success”. 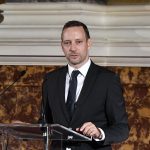