The government is imposing a hiring freeze in the public administration sector, but the measure will not affect hospitals or social institutions, the head of the Prime Minister’s Office said on Thursday.

Leftist daily Népszava reported on Tuesday that hospital heads had been instructed by state health service centre ÁEEK to put a stop on filling vacant jobs from Nov. 6 until the order was withdrawn.

In reaction, ÁEEK wrote that whereas the government regularly monitors the jobs situation in public services, “this does not mean that workers cannot be recruited when needed”.

The Hungarian Hospital Association verified the daily’s information telling in a statement that the health authority and the state secretary in charge of health said the hiring freeze in hospitals would be lifted as soon as possible. The Hospital Association added that the government measure had made existing HR problems in the sector worse.

Now, PMO Head Gergely Gulyás says the hiring freeze does not affect hospitals and social institutions who are free to hire new staff at any time, only the public administration, in which the government is planning a reorganization to solve critical worker shortage.

The government’s aim was to suspend recruitment in public administration, but no other sectors, Gergely Gulyás said.

He noted that the government will lift the hiring freeze in public administration on Dec. 1.

Gulyás also said that recent staff layoffs had left Hungary’s ministries with significant amounts of unspent funds which will be paid out to workers in the form of bonuses before the end of the year. 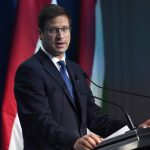