The government has set up an institute specialising in the research of Hungarian history and the development of tourism and education.

The institute, known as the Institute for Hungarian Studies, was established on Jan. 1 after the government approved last November a decree on its founding drafted by Human Resources Minister Miklós Kásler.

The institute will also focus on the study of the internal structure of the Hungarian language, its peculiarities and its connections to Hungarian culture as a whole. It will also publish a journal.

Kásler has appointed Gábor József Horváth-Lugossy as the institute’s director-general. 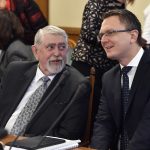