Hungary’s government is withdrawing an earlier decision to require a mid-level foreign language exam for admission to an institution of higher education, Gergely Gulyás, the head of the Prime Minister’s Office, said at a regular press briefing on Thursday.

Introducing the requirement would have created serious difficulties in some areas of study, such as agriculture, Gulyás said.

Language Exam for Uni Admission – Not Compulsory after All?

He added that the National Association of Student Governments, the network of Roma colleges and the language teachers association had asked for the requirement to be scrapped.

HÖOK (National Union of Students in Hungary) and the PSZ trade union of teachers welcomed the government’s decision to scrap the foreign language exam requirement for tertiary education admission. PSZ said in a statement that it agreed with the need for more young people to speak at least one foreign language but the current public education system was not up to the task of preparing students to meet language exam requirements. HÖOK said competitive language skills were indeed vitally important for young people but the public education system should be capable of providing the relevant training first. 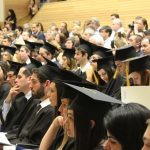