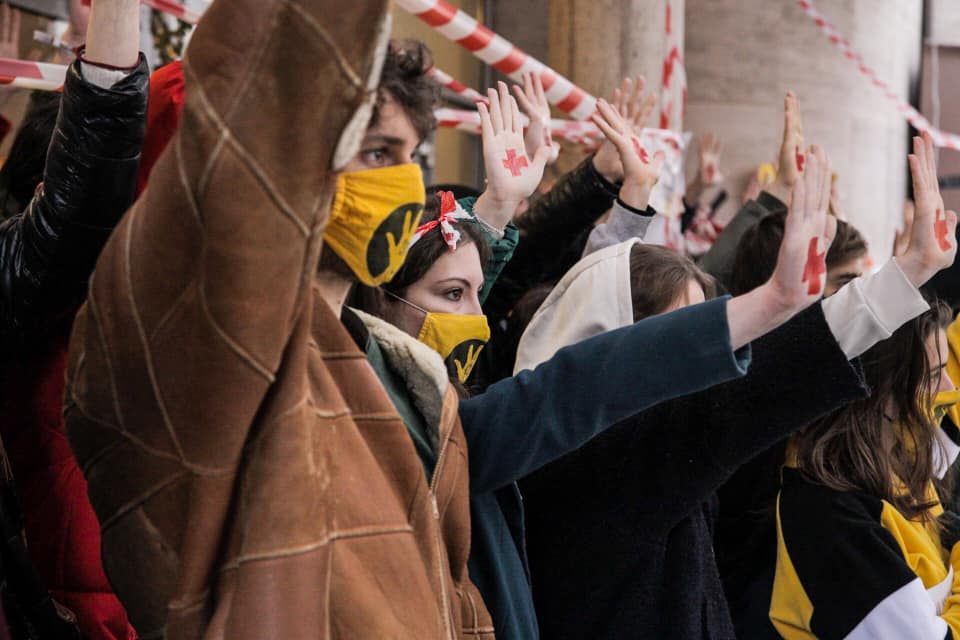 On the heels of a fresh government decree issued late Wednesday night, the University of Theater and Film Arts’ (SZFE) new government-backed overseeing foundation moved to cancel the autumn semester. Students who, due to the pandemic situation recently gave up their two and a half-month-long blockade, are outraged as the Educational Ombudsman warned against the cancellation.

Since his appointment, the new chancellor, former army colonel Gábor Szarka has constantly been increasing pressure on the protesting students: among other things, he had the internet turned off in the building, keys of the halls were also not given out, meaning that lectures had to be held in the corridors.

SZFE students were forced to give up their blockade of the institution’s main campus on November 10th due to Hungary’s new coronavirus restrictions. They decided on the protest back on September 1st after the government unilaterally decided to implement a new working model with the new leaders, something that SZFE’s pupils and faculty alike felt was an attempt by the government to limit the university’s freedom and independence.

Then three weeks prior to the government’s decree, he sent a letter with very similar content to the protesting students that their semester will be cancelled, and teaching can only start again in February. The Students’ Union protested the decision, and filed a suit (the proceedings have had a suspended effect, therefore the ruling cannot be carried out until the court makes a decision). They also turned to the Commissioner for Educational Rights.

Meanwhile, the government published its decree in line with Szarka’s earlier letter. The decree, published late Wednesday night and entering into effect as early as Thursday, makes it possible for the maintainers of higher educational institutions to order the suspension (and invalidation) of a semester, if public health, public safety, a natural disaster, or an unavoidable situation threatens the academic year and the exercising of student rights.

In the knowing of the consequences of the overnight decree, SZFE students again protested, knowing full well what consequences such a decree could bring [the maintainer’s new announcement – see below]. They denied that any of the conditions listed in the legislation would apply. Instead, they say the academic year and students’ rights are directly threatened by the suspension of the academic semester and indirectly by the way the transition is being managed. They insist that those risks were, however, avoidable if the Ministry of Innovation and Technology (ITM), the legal practitioner of the founding rights stepped up against the opposing maintainer.

By then, the Commissioner for Educational Rights, who had been examining the circumstances of teaching for weeks, had also finished his job on the matter. The ombudsman eventually told the truth to the students and claimed such a move would be illegal. Since they did prove that teaching could properly take place at the University, the maintainer has no reason to hinder the (advancement of the) academic year, Lajos Aáry-Tamás argued.

However, by the time he finished the examination, the government’s new decree made such a move by the board lawful.

In line with this, just one day after the decree entered into effect and a few hours after the Commissioner for Educational Rights published his statement, SZFE’s maintainer foundation announced to apply the decree and to annul the semester. The board of trustees’ statement says that teaching can only be continued from February 1st.

SZFE students consider both the new foundation, led by pro-government director Attila Vidnyánszky and the new chancellor illegitimate. They only want to negotiate with the IT Ministry, but so far without success. You can read more about the antecedents here: