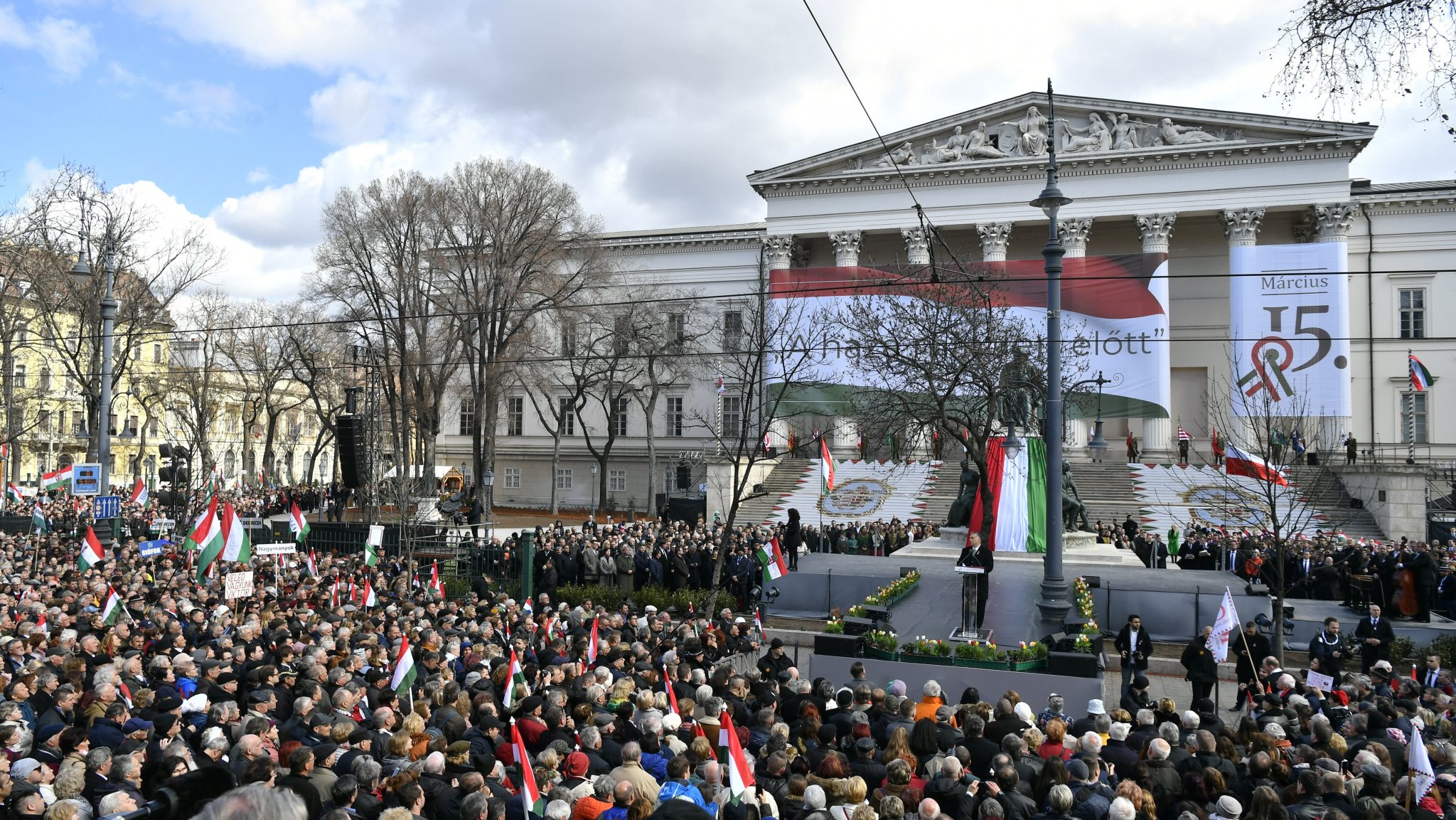 Hungary’s government has decided to cancel next week’s state celebrations of the March 15 national holiday because of the new coronavirus, at the recommendation of the operative board overseeing the response to the virus, the Government Information Office said on Saturday.

Though Hungary so far has only identified individual coronavirus cases and there are no major centres of infection, the state commemoration of the 1848 revolution held in the garden of the National Museum would attract people from all parts of the country, the statement said. “Therefore the government has decided to accept the operative board’s recommendation and will cancel the March 15 celebration at the Museum Garden for security reasons,” it added.

Local commemoration events will be decided on by the local organisers, the centre said.

Soon after the announcement that the government is cancelling the celebrations, Budapest Mayor Gergely Karácsony also announced that a March 15 event planned for City Hall would be cancelled. “Nothing is more important than the safety and health of Budapest residents,” the mayor said on Facebook. He said he hoped the virus hazard could soon be eliminated and “our cancelled reunion could be made up for”.

Meanwhile, the opposition Momentum Movement announced on Facebook that the leftist Democratic Coalition, conservative Jobbik, the Socialist Party, Párbeszed, green LMP and the Liberal Party had also decided to cancel their joint March 15 event “in the interest of protecting the health of attendees”.

Earlier, Tibor Lakatos, the head of the operative board told a news conference that the board had recommended the cancellation of the state celebrations.

He also said steps have been taken to suspend the operation of Milan-Budapest and Milan-Debrecen flights.

Lakatos added that any suspected patient who fails to submit to the necessary medical procedures could face criminal charges. He said proceedings were under way against two Iranian citizens who were refusing to comply with the rules of quarantine. Lakatos said that unless they checked themselves in, they would be taken to hospital by police.

He said anyone who deliberately infects someone else could be charged with causing serious bodily harm. If their actions lead to someone’s death, they could face homicide charges, he added.

As regards the operative board’s most recent measures, he noted that visa issuance has been suspended to Iranian citizens for an indefinite period, the South Pest Central Hospital has begun making room for more potential patients and prisons have been instructed to prepare a specific epidemiological plan.

Lakatos said several corporations have released their own action plans and the ban on lorries has been lifted for this weekend at the request of retailers and shops. In addition, schools have been sent a list of recommendations of epidemiological response measures. Transit zones at the southern border are still on lockdown, he said, adding that there are currently 306 people staying in them.

Lakatos noted that Hungary has so far identified five coronavirus cases, with four of those infected being treated in Budapest and one in Debrecen.

János Szlávik, head of the National Institute of Haematology and Infectology at South Pest Central Hospital, said the two Iranian students who tested positive for the new virus on Wednesday were doing well and awaiting the results of their latest tests. If those come back negative, they will be released from hospital. The condition of the Iranian girl who tested positive on Thursday had worsened on Friday but is doing better today, Szlavik said.

Miklós Kásler, the human resources minister, said that the most important thing was to prevent an epidemic of the virus in Hungary, noting that only individual cases had been identified so far. He said that if necessary, more space would be made available for quarantines at the Kútvölgyi hospital block.

Chief medical officer Cecília Müller said the fifteen Japanese tourists who were taken to St. László Hospital late on Thursday had tested negative and have been released from hospital.

The health authorities are currently looking into whom the Covid-19 patients had come into contact with, she said.