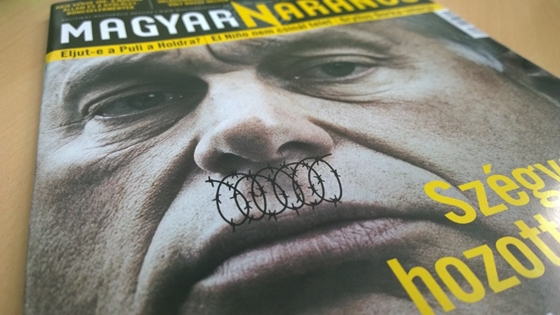 Around 2500-3000 pro-government demonstrators held a protest yesterday in front of the editorial office of the liberal news magazine Magyar Narancs against the cover design of its Thursday issue that featured Prime Minister Viktor Orbán with a barbed-wire moustache, a joint reference to the border fence and the late German dictator Adolf Hitler. 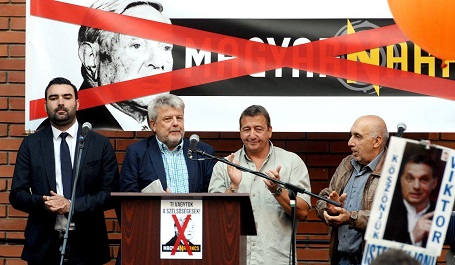 Speaking to the crowd at the magazine’s office in Páva utca, District IX, László Csizmadia, head of the pro-government Civil Cooperation Forum (CÖF), compared the paper to Charlie Hebdo and demanded its editors to apologise and resign. He also claimed that the majority of the Hungarian population believes that Viktor Orbán is the most suitable person to serve the country as Prime Minister and said that refugees should be provided shelter only until they are able to return home.

Journalist and writer Zsolt Bayer, a close friend of the Prime Minister and founding member of his ruling Fidesz party, branded the refugee crisis an “artificial, created Great Migration” with the aim of changing Europe’s ethnic composition. Addressing the Austrian chancellor, the French foreign minister, the Western media and Magyar Narancs, Mr. Bayer claimed that Europe’s “450 million inhabitants” do not want immigrants. He also praised countries – including Slovakia and Romania – which reject the EU’s planned refugee quota system and demanded a referedum on immigration.