The Hungarian government has raised this year’s economic growth projection from 2.5 per cent to date to 3.1 per cent, Péter Benő Banai, state secretary for budgetary affairs told television channel M1. He pointed out that the higher growth rate also has its effect felt in everyday life. It will manifest itself, among others, in the fact that “we shall continue to experience an expansion in employment” also during the years to come, Banai said.

Péter Benő Banai also said that the Government submitted Hungary’s Convergence Programme to the European Commission on 30 April. The convergence programme lays down regarding the 2016 plans that the growth rate of the Hungarian economy will be 2.5 per cent, the deficit of the budget will not exceed 2 per cent, and the rate of inflation calculated for next year will be 1.6 per cent. The lower inflation rate is attributable to two factors: the reduction of the VAT on pork and the relatively strong forint, the state secretary said. According to the Economy Ministry’s statement, the Convergence Programme “demonstrates the expected trends in the macro-economic processes in the form of comprehensive analyses.” 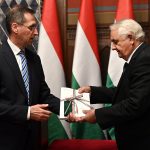