After Prime Minister Viktor Orbán’s ruling Fidesz-KDNP coalition has emerged as the clear winner of Hungary’s 2018 parliamentary elections with 134 seats in Parliament, the party vowed to press ahead swiftly to crack down on civil organisations that help migrants and refugees.

Fidesz spokesman said that with a two-thirds majority, the governing alliance would be able to freely pass the “Stop Soros” bill, which seeks to curb the activities of pro-migration NGOs. Halász added that the Parliament is expected to meet later in the month so the legislation can be wrapped up in May.

No one is in any doubt: this is a question of sovereignty and the security of the country. We must carry on working to fight against migration… but life goes on, and we will work to make sure taxes fall and wages grow as well.

Commenting on Fidesz’s projected majority, Halász said Fidesz had not counted on such a big win. “We are delighted with the result,” he told public broadcaster M1, “people realized that it was a fateful election.”

Fidesz won 48.51% of the country’s national list votes, garnering it 42 seats, and in addition won an astounding 91 of 106 individual districts as well. Speaking to his supporters from a watch party held in Budapest’s Bálna event center, Orbán claimed that his win was the conclusion of a “great battle” for Hungary’s future, and that he and his supporters had “defended” the country. German Chancellor Angela Merkel also congratulated Prime Minister Viktor Orbán on his victory.

Meanwhile, a Jobbik official called on the entire leadership to follow Gábor Vona in resigning, signaling the party’s move to the center had failed. The nationalist party is had won the second-highest number of parliamentary seats, 25 out of 199 seats. 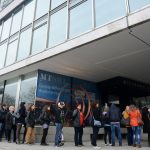