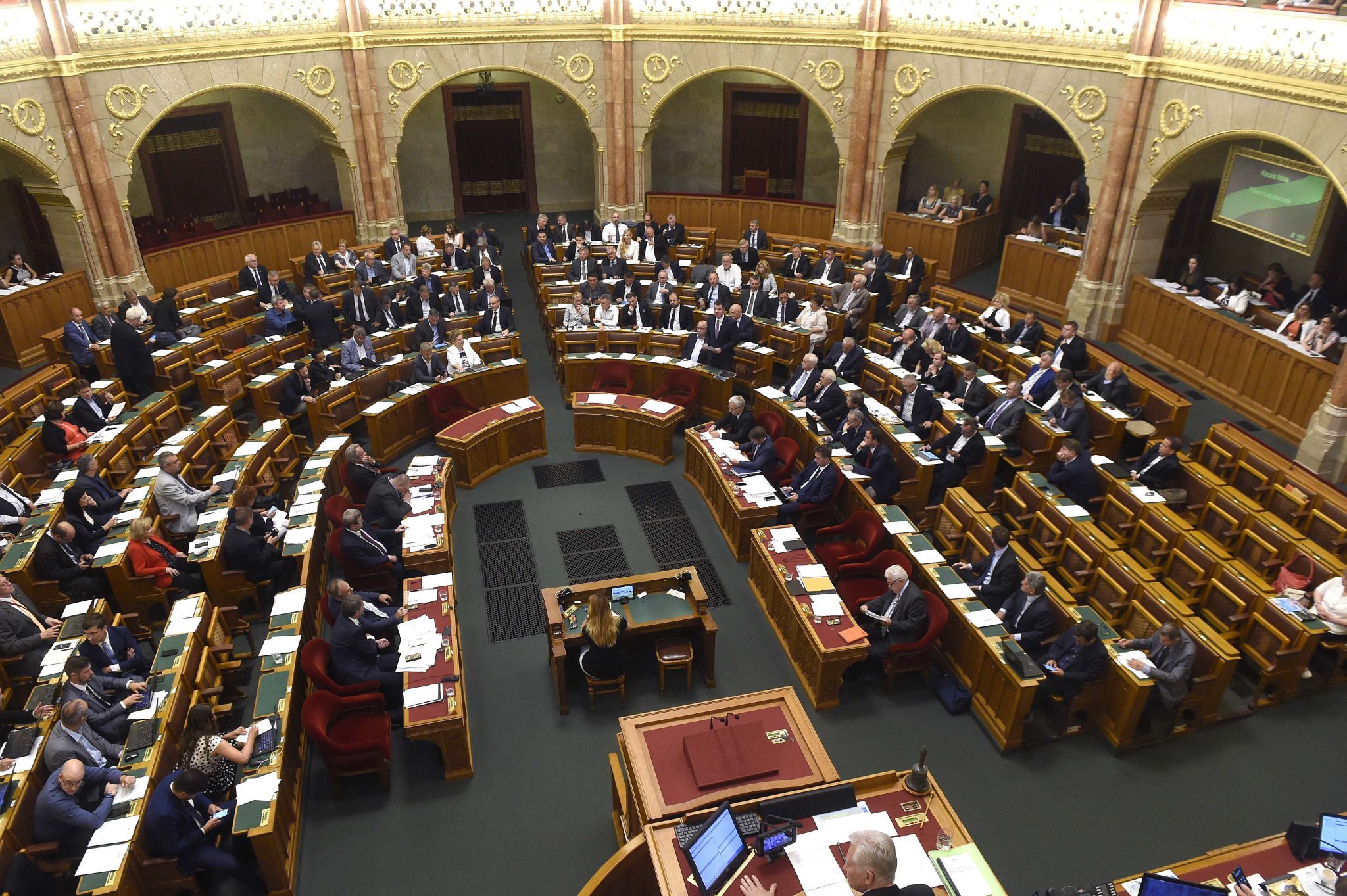 After MP Ákos Hadházy, an independent Member of Parliament, disrupted Viktor Orbán’s speech in Parliament with banners, the ruling Fidesz-KDNP (Christian Democrats) alliance has proposed stricter disciplinary rules for MPs violating the order of parliamentary sessions. According to Fidesz, the amendment is clearly trying to stem the tide of scandalous actions in parliament which have occurred numerous times over the past years.  Opposition parties, on the other hand, fear the new rules will further deteriorate the state of democracy in Hungary.

Scandals in the Hungarian parliament have occurred several times recently. For example, last year, opposition members prevented the sitting president from taking his seat in the pulpit and then disrupted the session, while a few weeks ago, an independent member of parliament, Ákos Hadházy, raised banners criticizing the PM with one of the writings containing obscene words.

According to the ruling parties’ proposal, MPs could receive a fine equaling six months’ salary if they used physical violence or obstructed Parliament’s or any of the session participants’ work.

The House Speaker could also ban MPs for sixty days not only from Parliament but also from the Representatives’ Office if they commit physical violence. Voting rights of the banned member could be transferred to another fellow politician, or in the case of a secret ballot, the banned member may exercise their voting rights in a room designated by the Speaker. If the representative does not comply, the fine may be doubled, equaling 12 months’ salary instead of 6.

Independent MP Bernadett Szél drew attention to another important change on Facebook: the proposal also includes restrictions on MPs' rights to enter state offices. It will remain mandatory for state bodies to help lawmakers fulfill their duties but the MP will be expected to indicate in advance if they request information from state bodies or public institutions.

One of the presenters of the proposal, Máté Kocsis, Fidesz’s parliamentary group leader, said in a press conference that some of the “wilder” opposition MPs have recently committed “unprecedentedly boorish acts” in Parliament. According to the Fidesz MP, due respect must be given to the National Assembly, there is no place for distasteful speech or disorder in Parliament. The penalty so far has had a negligible effect, and those concerned have easily paid the money, he argued. So raising the maximum fine applicable as a general rule, hopefully will have a greater impact, Kocsis added.

The opposition Socialists called the proposal unacceptable. Party leader Bertalan Tóth said that Fidesz pledged “to conduct a self-examination” after “the massive defeat” it had suffered in last month’s municipal elections. The motion proves, however, that Fidesz “has learnt nothing at all,” Tóth told a press conference.

Nationalist Jobbik deputy group leader László György Lukács said the proposal is “probably unconstitutional, unacceptable in a state governed by the rule of law, and evokes the era of dictatorial rule.”

The leftist Democratic Coalition said earlier in the day that the proposal “is another step towards ending the parliamentary system and establishing a dictatorship.”

From now on, MPs may be banned from the Parliament building and the block that houses lawmakers’ offices for several months, making it impossible for them to carry out their work, DK deputy parliamentary group leader Gergely Arató said in a press conference.

Independent MP Ákos Hadházy also responded to the proposal on social media saying that this amendment resolves the question whether the government will harden after the municipal election, adding that Fidesz will always change the rules of the game when they see a problem.

Hadházy believes this proposal is also a clear message to opposition colleagues: Fidesz expects them to sit in silence and play the role of scenery in an emptied parliament.