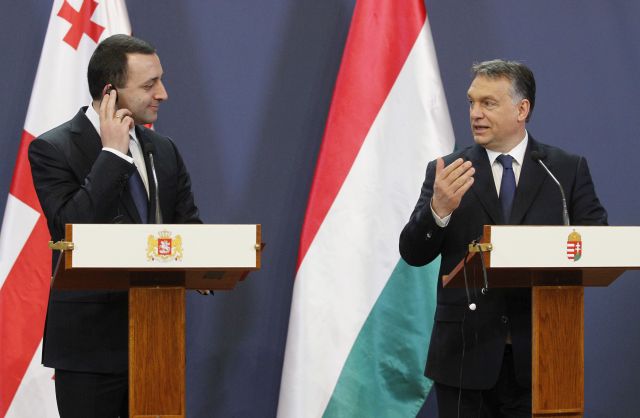 Georgia’s significance is increasing continuously in terms of Europe’s energy security, Prime Minister Viktor Orbán said after holding talks with his Georgian colleague Irakli Garibashvili in Budapest. The Prime Minister assured his Georgian counterpart of Hungary’s support for his country’s cooperation with NATO and its territorial integrity. Mr. Orbán said that possibilities in Hungarian-Georgian economic relations have to be exploited.
With attempts to build a gas pipeline avoiding Ukraine failing one after the other, Georgia’s importance and its strategic weight for in the eyes of Europe has increased dramatically. Energy security on the continent is barely imaginable without Georgia playing a major role as an energy distributor or supplier, Mr. Otbán said. He also assured the country of his support for Georgia’s goal of Euro-Atlantic integration and said that Hungary respects the country’s territorial integrity, adding that the Hungarian government has proposed abolishing visa requirements for Caucasian countries as part of an EU programme to increase stability in the country.
He also said that Georgia is an important trade partner for Hungary, with trade relations expanding by around ten per cent in the first ten months of 2014. A Hungarian trading house is to open in the Georgian capital Tbilisi in April, Mr. Orbán added.
In a press statement given in Parliament, his Georgian colleague Mr. Garibashvili expressed his gratitude for Hungary’s assistance to Georgia in implementing undertakings accepted by the country at the NATO summit and stressed the importance of strengthening relations between the two countries, saying that new areas of cooperation had been identified during discussions. He also said that the country is making a significant effort to prove appropriate for partnership with NATO. The Georgian Prime Minister underlined the importance of the association agreement and lifting visa requirements, thanking Hungary for ratifying the association agreement between the EU and Georgia in time.
The two Prime Minsters’ press statement was preceded by the signing of an agreement on cooperation by the two countries’ foreign ministers.
via mandiner.hu
photo: MNO/Béla Nagy