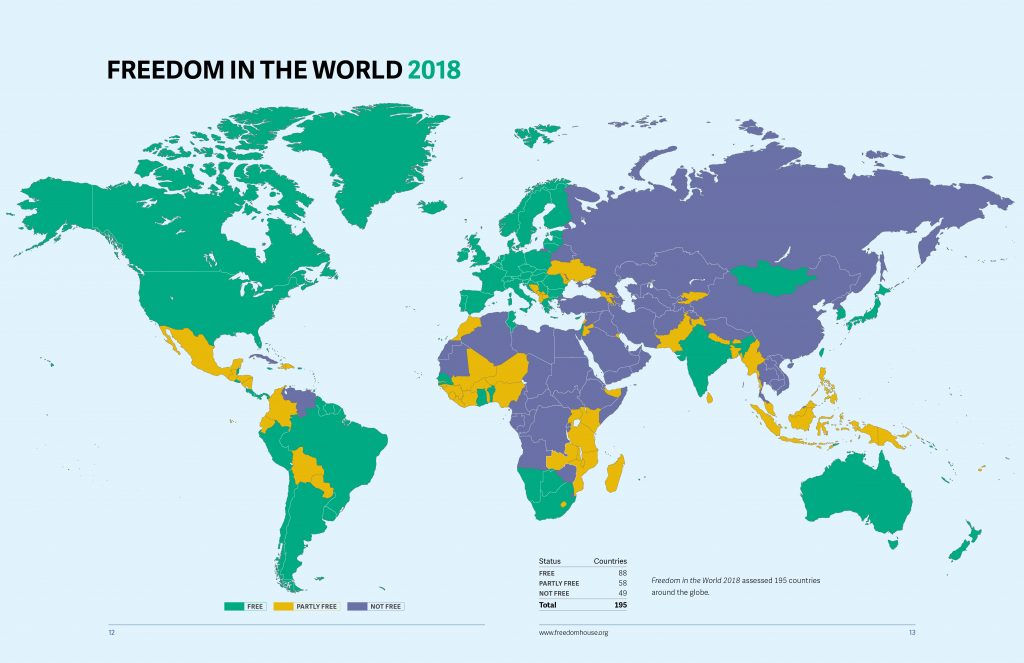 This week, US-based nonprofit Freedom House released the 2018 edition of its annual “Freedom in the World” report, which examines the state of democracy, political rights, and civil liberties throughout the world. While Hungary is still ranked as “free” according to the group’s estimation, the country has dropped down from last year to the lowest-rated EU country.

Freedom House’s evaluation of Hungary did not occur in a vacuum, but rather in an international environment that the NGO described in openly negative terms:

Democracy is in crisis. The values it embodies—particularly the right to choose leaders in free and fair elections, freedom of the press, and the rule of law—are under assault and in retreat globally… For the 12th consecutive year, according to Freedom in the World, countries that suffered democratic setbacks outnumbered those that registered gains.

Freedom House listed a number of causes for an erosion in democracy worldwide, including the spread of right-wing populism in the Western world, the growing global influence of autocracies such as China and Russia, and the United States’ apparent withdrawal from its leading role on the world stage, as well as a “a slow decline in political rights and civil liberties in the United States for the past seven years.”

Turning to Hungary, the NGO’s report argued that

States that a decade ago seemed like promising success stories—Turkey and Hungary, for example—are sliding into authoritarian rule.

This year, Hungary received a 72 out of 100, a 4-point decline from the year before. In explaining this, Freedom House claimed that

Hungary received a downward trend arrow due to increasing intimidation of civil society groups and the opposition, which has left citizens more reluctant to speak out on political topics.

In particular, the group argued that both Hungary and Poland have witnessed a democratic backsliding, as “populist leaders continued to consolidate power by uprooting democratic institutions and intimidating critics in civil society.” In addition, Freedom House claimed that, in both countries, “Smears of the opposition appeared in public media….and both passed laws designed to curb the activities of nongovernmental organizations.” 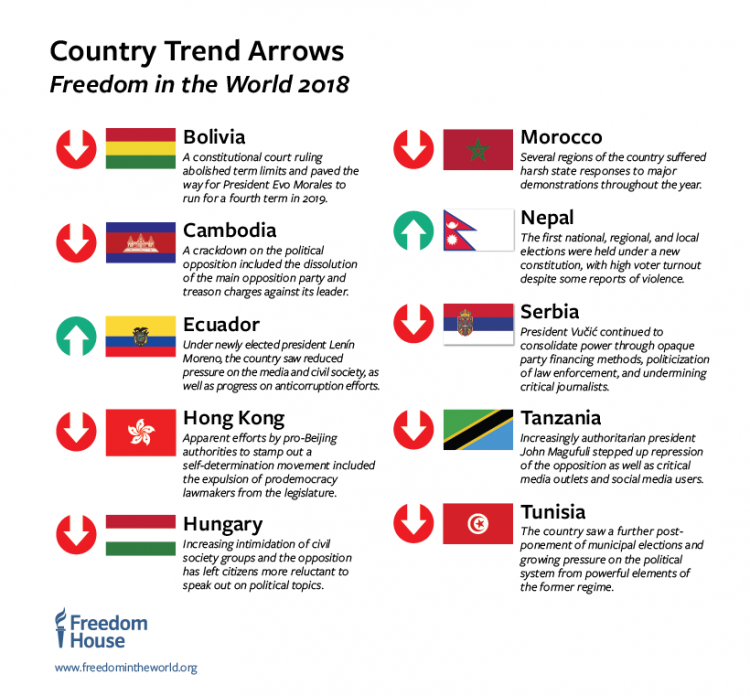 While its full report on Hungary has yet to be released, in these remarks, Freedom House seems to have been thinking of a number of steps that the government of Prime Minister Viktor Orbán has taken in the past year that have drawn a great deal of international criticism. These include the passage of the “Lex CEU” higher education legislation amendment that critics have argued was directly intended to force Central European University (a highly-regarded research institution founded by Hungarian American billionaire George Soros) out of the country; the passage of a law  requiring civil groups receiving foreign donations above a certain threshold to register as organizations funded from abroad, which humans rights and civil society groups worldwide have condemned as a move to silence “critical voices in society”; and an ongoing campaign targeting George Soros and NGOs linked to him, including a recent “National Consultation” questionnaire on the supposed ‘Soros plan’, which the government claims is a plot to fill Hungary and Europe with migrants from the Middle East and Africa.

These issues have all made their way into the international spotlight, and all have received criticism from nonprofits, the European Union, and Hungarian political figures as well.

This is not the first year that Hungary has received a critical appraisal from Freedom House. As the graph below shows, Hungary has dropped 20 points in the group’s World Freedom index in the past decade, which is by far the largest decline among countries that are still ranked as “free.” 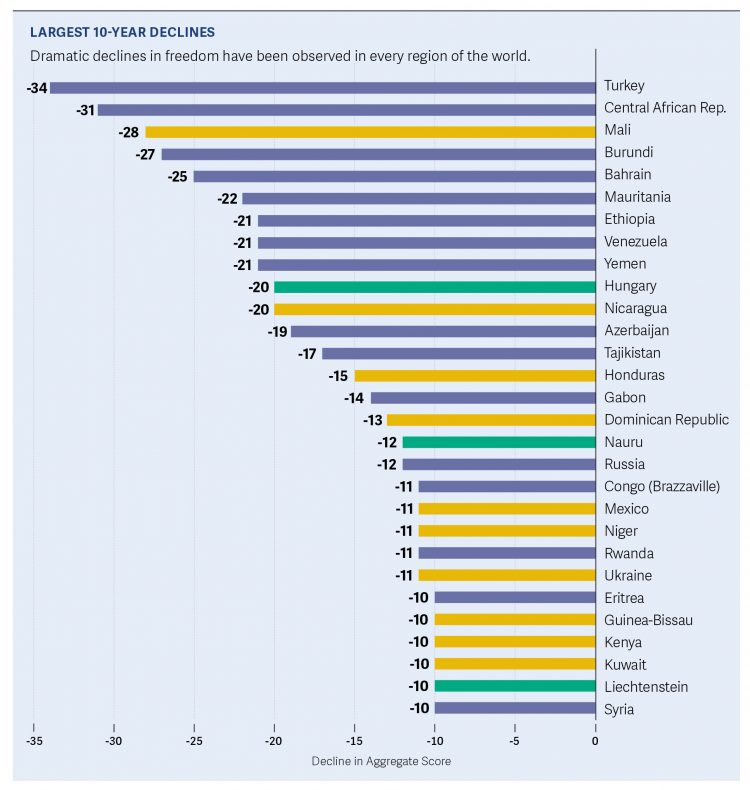 Freedom House itself is a US-based non-profit founded in 1941 as “the first American organization to champion the advancement of freedom globally.” The group’s site says it advocates “for U.S. leadership and collaboration with like-minded governments to vigorously oppose dictators and oppression.” While it does receive some donations from corporations, foundations, and individuals, the vast majority of Freedom House’s revenue comes from the US government.

Reports such as Freedom House’s, which rank the world’s countries based on various criterion, have come under increased criticism recently due to a scandal involving the World Bank. Each year, the financial institution publishes a ranking of countries by ease of doing business; last week, however, the bank’s head economist admitted publicly to the Wall Street Journal that the list’s integrity had “been compromised by politicized methodology,” which negatively impacted a number of countries, particularly Chile. This, in turn, has, perhaps unsurprisingly, caused some to call the integrity of other such rankings into question.

Likewise, Századvég, a Hungarian think tank closely aligned with the Orbán government and which receives government funding, argued in a recent article that studies such as Freedom House’s Freedom in the World report are inherently flawed. In particular, the article argued that such studies, in addition to often having just one expert responsible for each country, are working not with publicly available data, but with opinions and evaluations that are “inherently subjective.”

In response to Freedom House’s less-than-stellar evaluation of the state of Hungarian democracy, representatives of Viktor Orbán’s Fidesz government claimed that the group’s report “is politically motivated and biased.”

Government spokesman Zoltán Kovács further claimed that “considering where the organisation receives its financing from,” Freedom House’s report must be nothing more than an “open attack” against Hungary by

Kovács claimed that Freedom House’s assessments are political, linked to Soros and liberal circles that are in dispute with Hungary in terms of ideology and politics. He also criticzed the group’s overlooking of “obvious violations of law committed on October 23, 2006,” a reference to how the then ruling Socialist-liberal coalition had handled anti-government demonstrations.

Despite Kovács’ comments implying that Freedom House was somehow a “Soros organization,” there is little financial data to back up such claims.  As we noted above, the NGO received the vast majority of its 2016 funding ($24 million of its total $29 million revenue) from US government grants, not from private donors. In fact, corporations, foundations, and individual contributions (which theoretically could include support from George Soros) total less than $2 million.